The Twenty Fourth Pauree breaks through all limitations with the force of a thunderbolt. It is so powerful that it affects generations. It has the power to kill misfortune. 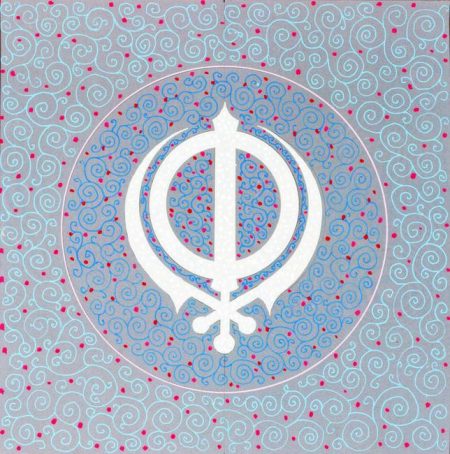 The 24th pauree is about the endless, limitless, and countless nature of the One. Guru Nanak tells us that no one knows the limits of the One and there are no words that can describe that vastness. Nam Simran, chanting and meditating on the Naam, can unlock and open our inner door to invite in the divine experience of this essential resonance. How well we succeed in fully opening to it is partially due to our practice and discipline, but primarily achieved through Grace. This experience of Naam cannot be taken, it can only be received as a gift. Guru Nanak advises us that the One is infinite but that we, as humans, do not have the capacity to fully grasp that vastness. However, Nanak gives us a way to reach that state, which is through the Naam. The Naam is the highest of the high and those who practice the Naam can achieve that exalted state through nadar, the glance of Grace. Yet, he puts it on us, the students, to do the work.

Do you know what Guru Nanak has done? He has used Naad, Siri Naad, and put all the limits of the sun and moon and the stars, and the individual psyche, and the reactive psyche, and the co-reactive psyche, and the projecting psyche. What he did is to put out a big hand and round it up. That gives you sovereignty. That guarantees your happiness. The greatest thing ever Guru Nanak has done for mankind is to give this [24th] pauree. It cuts out any and all negativity, insanity, pain, and curse in life. It breaks everything within the limit that can affect you. 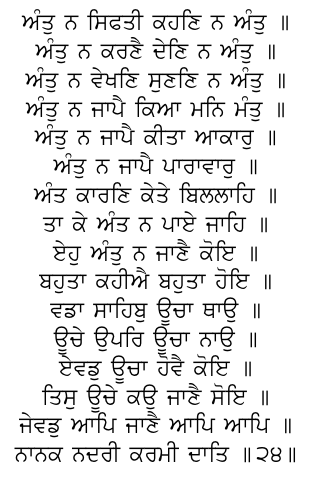 Endless are His praises, endless are those who speak them

His limits cannot be perceived.

What is the mystery of His Mind?

The limits of the created universe cannot be perceived.

Its limits here and beyond cannot be perceived.

Many struggle to know His limits, but His limits cannot be found.

No one can know these limits.

The more you say about them, the more there still remains to be said.

Great is the Master, High is His heavenly home.

Highest of the High, above all is His Name.

Only one as great and as high as God can know His lofty and exalted state.

Only He Himself is that great.

He Himself knows Himself.

O Nanak, by His glance of Grace, He bestows His Blessings.

Enjoy these beautiful musical versions of the 24th Pauree, courtesy of the SikhNet Gurbani Media Center: