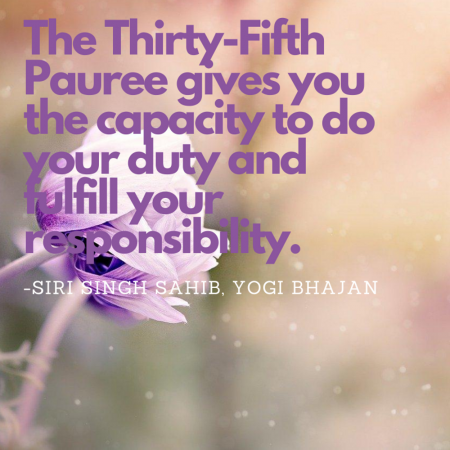 “The thirty-fifth Paurī gives you the capacity to do your duty and fulfill your responsibility.”

By their deeds and actions, they shall be judged.  God himself is True, True is His Court. There in grace and ease sit the self-elect, self-realized saints who receive the mark of Grace from the merciful Lord.  The ripe and unripe, the good and bad, shall be judged when they go home. This is righteous living in the Realm of Dharma.

In the Realm of Dharma, Gurū Nānak explains the Law of Karma. Every thought, deed or action taken has a consequence that will be judged within the Court of God: a Court of Truth.

Gurū Nānak explains that we must self-initiate our growth of consciousness. Only those who become self-realized can live in Grace beyond the duality from which this world presents itself to us with all of its polarities.

We need faith to receive this mark of Grace, after which we can self-elect to proceed in fulfilling our prescribed destiny. Then through a process of self-initiation we can become self-realized.

In faith we take action, and sit with the self-realization that every action has a consequence, even unintended consequences. For this the Grace of God covers us with mercy. 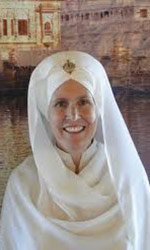 Sardarni GuruAmrit Kaur has dedicated her life toward serving and developing Dharma through expanding the work of our nonprofits and spreading the light of the Shabad Guru.