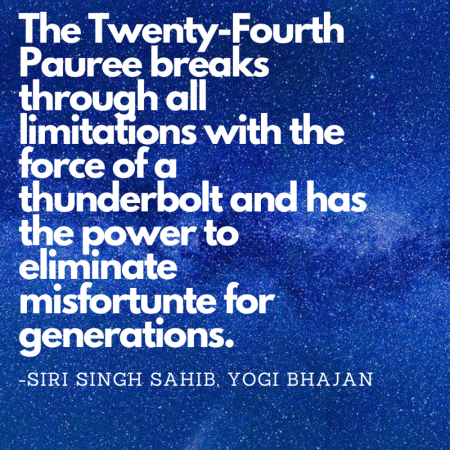 “The twenty-fourth Paurī breaks through all limitations with the force of a thunderbolt, so powerfully that it affects generations: it has the power to kill misfortune.”

The 24th Paurī uses the term Ant Na, repeatedly. Ant means end. Na is the negation of Ant,  meaning without end, countless, as it is frequently translated. In this Paurī, Gurū Nānak marvels at the vastness of the Ek Ong Kār. He explains that countless are the praises and the praisers of God, countless are the works and gifts of God. Gurū Nānak goes on to explain that God’s powers,  His vision and hearing is limitless.

Here, Gurū is giving human qualities to the Ek Ong Kār so that the human can grasp a sense of the vast limitless quality of God. Gurū Nānak tells us that no one knows God’s limits and there are no words that can describe him because in order to know Him, one must become as great as He is.

Yet, God’s Name, the Nām is the highest of the high, implying that the Nām is actually higher than God Himself. Ultimately, Gurū Nānak says, only God alone knows how great He is, yet by his kind looks the merciful God showers His kind gifts.

So, Gurū advises us that the Ek Ong Kār is infinite but that we, as humans do not have the capacity to fully grasp that vastness. However, Nānak gives us a way to reach that state, which is through the Nām.The Nām is the highest of the high and those who practice the Nām can achieve that exalted state. Gurū puts it on us, the student, to do the work.

“Whosoever perfects these words, by uttering, by singing, by remembering, shall have a mastery on five Tattwas, three Gunas, and eight Chakras, ten Bodies, and Infinity.  I swear it is true.” (2)

He talked extensively about this 24th Paurī that summer, especially at Khalsa Women’s Training Camp aka Ladies’ Camp. At his Ladies’ Camp lecture on 4 July, 1989, the American Independence Day, he said this:

“Sun flares affect the woman and the moon waning and waxing affects the man. We call it corruption and discuss it a lot in society. Actually it is caused by a sun eruption. Depending how big the flares are, which side of the sun they are on a woman can go through it in an absolutely heavy way. The only unfortunate part of it is that certain sun flares affect a certain category of female so suddenly, so sharply, that even she doesn’t know what she is going through. Gurū Nānak knew about it, and he talked about it. He put one Paurī in Jap Jī  to give strength of the mind to face all of what is in the stars. He knew the tragedy the woman goes through, the tragedy man goes through and he understood it.

Do you know what Gurū Nānak has done? He has used Naad, Sirī Naad and put all the limits on the sun, moon and stars, individual psyche, reactive psyche, co-reactive psyche and projecting psyche. What he did was to stretch out a big hand and round it all up. That gives you sovereignty. That guarantees you happiness.  The greatest thing Gurū Nānak has ever done for mankind is to give this Paurī. It cuts out any negativity, insanity, pain and curse in life. It breaks up everything within the limit which can affect you.

The rhythmic pattern of the twenty-fourth Paurī of Jap Jī and our (United States) national anthem coincidentally happen to be the same. One is the song of the Infinity and the other the song of freedom and victory. So what we are going to do is put them together and set the ball rolling for the freedom of woman because the Grace of God Movement for Women of America is a part of us.” (3)

Later that summer, on August 8, 1989 the Siri Singh Sahib Yogi Bhajan said this about the 24th Paurī:

“This ‘Ant na siphatī kahaṉ na ant’…are the words of Nānak. It will give you infinite powers.  It will give you victory, it will give you conquering intelligence.  It is amazing, the same notes are in our American National Anthem.  The same notes are in this Paurī of the infinity.  Line by the line.  Not a one line is more, not a one line is less.  …you are not born free.  You are to be lived free. And you have to live ’til infinity as free.  That’s why all the words and the balance of the words and the rhythm of the words are exactly the same as what is in the Paurī of Infinity sung by Gurū Nānak.  Just copy the tone, copy the note, see how it fits in.  Copy the sound.

These are vibrations, these are permutations and combinations.  This is not to be considered religion and not religion….Medicine is not always bitter.  Some medicines are sweet, too. These are the tools which you must have so people may not make a fool out of you.  Man is a fool without his tools. There’s no defense. Strongest defense is that your mind must serve you and your mental strength be with you so your spirit can come through and your body can sustain.

Anything which stops you, gets stopped itself. Ant means end, the end is endless. It gives you immortality. Mortal becomes immortal. It gives you infinity. Finite becomes infinite.” (4) 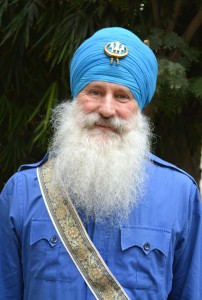 Gurutej Singh Khalsa is a yogi, warrior, businessman, poet, healer, and teacher. For 35 years he studied Kundalini Yoga and the teachings of the Sikhs from his teacher Siri Singh Sahib Bhai Sahib Harbhajan Singh Khalsa Yogiji, aka Yogi Bhajan (1929 – 2004). As a trained law enforcement officer, Gurutej was a personal bodyguard and aide to Yogi Bhajan and traveled the world with him. He is the Founder of Akal Security, Inc., which he grew from a small start-up business in his living room to the largest privately held security services contractor in the United States and largest provider of protective services to the U.S. Government. Gurutej is a respected and recognized teacher, speaker, healer, and counsellor in his own right and has taught Kundalini Yoga, the science of meditation, and the teachings of the Sikhs all over the world. In 2001 he published a book of poetry, Children of the Cusp, about his experiences as a student on the spiritual path under the guidance of a great teacher. In 2014 he published his moving and inspiring novel RAJNI, which was awarded the Gold Seal of Literary Excellence. Drawn from myth, legend, and historical events and the first of a trilogy, RAJNI is a deeply moving epic about the powers of love, sacrifice, and the elevation of the soul. Gurutej Singh lives in Singapore with his wife and son.