A common proverb in India is “The seva brings meva.” Meva means fruit or benefit. In Sikh Dharma, the concept of seva implies giving to the Infinite beyond personal identity. This may be the most effective means through which one can synchronize the mind and body, to allow the soul to merge with the Divine.

To serve Infinity, a Sikh serves the Guru; and serving the Guru means serving the sangat—the congregation composed of common people. Our Gurus could never restrain their longing and willingness to serve the sangat.

We must understand that seva is not a duty, a donation, a charity, etc. Seva is a personal discipline in which a Sikh aspires to develop his spiritual ability and power through a defined attitude by the application of the formula (Gur) of OBEY, SERVE, LOVE, EXCEL.

The following is a cautionary tale about seva, from the life of Guru Gobind Singh: 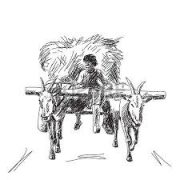 In Anandpur Sahib there was a well-respected elderly sevadar, who had distributed Guru’s prasad to the sangat for many years. One day a farmer was passing through, traveling in his loaded cart pulled by two oxen. It was already evening and he was in a hurry because he had to cross the jungle before darkness. However, out of his devotion and love he could not go without receiving the prasad of his Guru.

He jumped out of his cart, leaving his oxen unchained, and hurriedly entered the camp. He approached the old sevadar, who instructed him to go behind, sit in the sangat and wait his turn. The peasant tried to explain his situation, that he was in hurry because he had to catch his moving cart. He insisted that the sevadar make an exception in his case.

The man’s clothes were dirty, his turban was in disarray, and his matted hair was falling down. The sevadar got angry and shouted, making signs with his right hand: “You dirty man!  Do not jump like a bear over me! Go back and wait your turn!” With the movement of his hand, a small portion of prasad fell on the ground. The farmer collected that small portion and proclaimed silently, “My job is done.”

Shortly thereafter the elderly sevadar passed away. A few years later a juggler with a bear appeared in the darbar of the Tenth Master. He asked Guru Ji to allow him to offer a show to the sangat. Guru Ji, after requesting the sangat’s permission, allowed the juggler to do his performance. This time the bear really gave an excellent show. Even the juggler himself was surprised to note that the bear was very happy and had satisfied everyone with his presentation.

he son of the old sevadar happened to witness the performance, and was jumping and laughing loudly. Guru Ji asked him if he knew who the bear was in reality. Guru Ji then narrated the story of the bear, who in his past life had been the elderly sevadar, this young man’s father. As he did not give proper attention to the farmer, the farmer cursed him, wishing him to be a bear in his next life.

Upon hearing this, the sangat fell silent. Everyone was sad; the young man was crying. People asked the Guru: “ How is it that a man who had served the Guru for his whole life, instead of being liberated was punished in such a terrible way?”

Guru Ji proceeded to explain that the sevadar had made the mistake of seeing the farmer as a person and judging his personal identity, based on his aspect and attitude. Guru Ji stressed the importance of compassion, tolerance and respect for everybody. One must not hurt anybody during the seva and must serve everybody unconditionally without any personal identity.

The sangat petitioned Guru Ji to do something to abolish the old sevadar’s mistake and liberate his soul. So Guru Ji asked for fresh prasad. Ardas was performed and the prasad was offered to the Guru and was first given to the bear. The moment the bear ate the prasad, it instantly passed away and was liberated. Everybody, particularly the young man, was grateful and happy.

The story ends with a perfect illustration of Guru Gobind Singh’s infinite wisdom and unconditional compassion. The juggler now claimed that the bear was his only source of income. He had offered his performance as seva and did not expect such an awful outcome. Guru Ji accepted the responsibility.

He then asked the sangat to donate money or jewels to compensate the juggler. The whole sangat cooperated and Guru Ji himself added the same amount so that the juggler could find some other means of livelihood. Wahe Guru Ji Ka Khalsa! Wahe Guru Ji Ki Fateh! 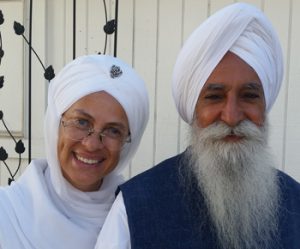 SS Arjan Singh Dhillon and SS Arjan Kaur Khalsa are ordained Sikh Dharma Ministers. With the blessings of Siri Singh Sahib ji, Arjan Singh and Arjan Kaur were married in 1979. To fulfill the community‘s growing needs, they opened the Sikh Center in Mexico City in 2000. The organization supports projects and teachings related solely to Kundalini Yoga and Sikh Dharma and hosts gurdwaras and “destination” weddings.

Arjan Kaur is a musician and has performed Gurbani Kirtan since 1978. SS Arjan Singh cooked for Siri Singh Sahib Ji during his visits to Mexico City and Guadalajara. He has prepared langar for many years and also runs a health food restaurant.

This article is courtesy of the SDI Ministry Newsletter