“Seva is a win/win, the total source of victory. The moment you serve with heart and head, and without grinding any axe, you win the person forever. You deliver another person facing difficulty to their own strength. You save the person in the face of calamity. You protect him in the face of non-reality and bring home the reality.”—The Siri Singh Sahib (Aquarian Times, Sept/Oct 2006)

By Guru’s Grace, this past February, a longstanding drought in Northern California was ending. Record snowfall and rain were filling reservoirs, rivers and streams with life-sustaining water in abundance. On February 7, 2017, the celebration turned to concern, when a large hole developed on the main cement-lined spillway at Oroville Dam, one of the largest earthen dams in the United States.

Rain and runoff from surrounding mountains continued to fill Lake Oroville to capacity. Government officials were forced to continue major water releases over the damaged spillway and on Saturday, February 11, an untested earthen emergency spillway was opened.

By late Sunday afternoon a catastrophic amount of erosion was detected below the emergency spillway and a mandatory evacuation order was given for the City of Oroville. Residents had less than one hour to pack family, pets, and belongings. The evacuation order was soon extended to areas downstream in Yuba and Sutter Counties and a chaotic exodus of more than 180,000 people began. 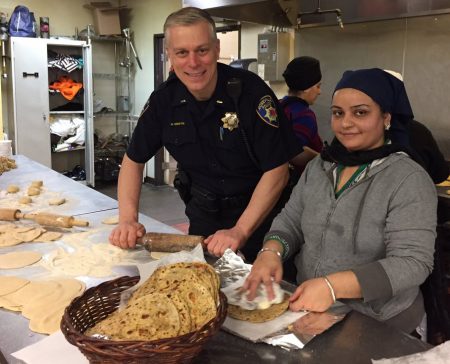 As soon as official word of the evacuations was announced, Sikh Gurdwaras in Northern and Central California opened their doors to provide food, shelter and support for evacuees even before local and federal aid was organized. Members of the Yuba City Punjabi American Heritage Society who lived outside the evacuation area opened their homes as well.

The outpouring of gracious support by the Sikh community during the evacuation was recognized by local and national media. Reporters marveled at the high level of preparation and organization they demonstrated through their selfless service.

Many prayers were given by local Sikhs as well as the national and global Sikh sangat. Fellow Sikh Dharma Ministers who had family and friends in Northern California kept in contact and held prayerful space in their hearts. Wahe Guru! The prayers were answered and a major catastrophe was averted.

On February 14, the mandatory evacuation order was lifted and people were allowed to return to their homes and businesses. Repairs on the Oroville Dam spillways continue as the spring runoff from the heavy snow pack has not yet started.

Our communities keep a watchful eye on the Oroville Lake water levels as they work together to make better evacuation preparations and plans for future flooding events. The seva in action by the Sikh community remains in the hearts and minds of those who were fortunate to benefit from the True Guru’s Grace.

SS Sangeeta Kaur Khalsa is an ordained Sikh Dharma Minister. She completed Level I Kundalini Yoga Teacher Training at the Kundalini Yoga Center in San Francisco, California, and took Amrit at Summer Solstice in Espanola, New Mexico in 2013. Later, she was ordained as a Minister of Sikh Dharma. She currently volunteers for Guru Ram Das Center for Medicine and Humanology and Sutter North Hospice. She also teaches art and Kundalini Yoga at the Sikh Community Center Khalsa School, participates in a Punjabi Sikh Gurbani Study Group, and is a member of the Punjabi American Heritage Society in Yuba City, California.

This article is courtesy of the SDI Ministry