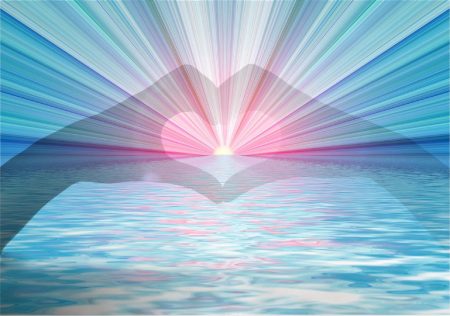 In the Sikh tradition, the written words in the Siri Guru Granth Sahib are known as the Shabad Guru. The Shabad Guru is seen not simply as a compilation of uplifting and inspiring words written by enlightened saints and sages and placed on the pages of this volume, but as the living Guru of the Sikhs.

Those who wrote the words of the Siri Guru Granth Sahib transcended individual identity and ego, and their words came from an exalted state of things unlimited. When we take the opportunity to read, sing, chant, and listen to these words, we deeply connect with our excellence. There is no external personality to confront in the process. There is only our relationship with our own Infinity.

The Shabad Guru is a powerful technology universally available to anyone in any walk of life to uplift and transform self and others. Through the Shabad Guru, we can directly use and gain infinite benefit from the sound that “clarifies the doubt of the mind and gives unity and essence to the man.”

Of the many penetrating concepts Siri Singh Sahib, Yogi Bhajan shared, he often discussed the pitfalls of the human tendency to “go out and get” what we believe we want. He repeatedly stressed that the way to success was not in seeking anything outside of ourselves—be it wealth, status, power, possessions, or approval. Rather, through meditation and developing a deep relationship with the Divine within, the key to victory is to train yourself to be still and allow things to come to you—to become truly “attractive.”

He summed up this concept with the simple and penetrating line, “Go inside and be a Master, go outside and be a victim.” Stated differently: Go deeply inside, touch your soul, and vibrate at the frequency of the Divine. There you will find your victory and satisfaction—your self-mastery.

On the other hand, succumbing to the seduction and illusion that answers lie outside of yourself, you will become a victim of your own expectations and illusions. True satisfaction will be fleeting.

Look around you. Look at yourself. Many of us have a tendency to look for solace outside of ourselves. Our active mind is ever creating schemes and machinations to gain material goods, status, affirmation, sympathy, and empathy. Even though we do it all the time, we often find that there is something empty in seeking for solutions outside.

Self-mastery comes from a deep relationship with the self. The Shabad Guru is a powerful tool to develop that rare relationship between the finite you and Infinite You. When you have trouble, go to the Shabad Guru. Sit quietly, meditatively. Choose a verse or chant…any one will do…to sing or recite.

Reciting these blessed words helps you to go inside and connect with your soul. By so doing, you will find a deep and rich state of being wherein lies the permanent, true answers and solutions to your troubles.

The sound current of the Shabad Guru produces a pure vibratory frequency, much like a tone emitted from a tuning fork when it is struck. The essence of the sound current of the Shabad Guru is the deep, rich reality of Truth. There is no difference between that reality and the effect one achieves by reciting from the Shabad Guru. Siri Singh Sahib, Yogi Bhajan stated that this technique is very powerful: “Train the brain—the memory and the neurons—and create the means through which the brain directs the entire body.”

He says that you can attempt to think and think one hundred thousand times, yet thinking won’t accomplish a thing. You may try to pile up worldly goods and possessions, but that does not provide true, lasting satisfaction. And of all your wise and fantastic schemes, none of them will go with you in the end.

So given that, time and time again, we experience that our thinking, acquiring, searching, and maneuvering do not really work, how do we become truthful? How does the wall of falsehood fall apart? Guru Nanak says the answer lies in walking with the very command of God that is with us and within us.

It is said that the total knowledge of God and ecstasy is contained in this pauree. It is an antidote to depression. It will lift you from the deepest depression, insecurity, nightmares, and loss.

Use the power of the Shabad Guru to go inside of yourself, touch your deepest Self, touch God, and find mastery.

The language of the Shabad Guru is Gurmukhi, a language similar to Sanskrit in its power to transform. The Siri Guru Granth Sahib was written in Gurmukhi script and has been translated into English. Here we provide both the transliteration and the translation.

By thinking, He cannot be reduced to thought, even by thinking hundreds of thousands of times.

By remaining silent, silence does not come, even by remaining lovingly absorbed within.

The hunger of the hungry is not appeased, even by piling up loads of worldly goods.

Hundreds and thousands of clever mental tricks, but none of them will take you there.

So how can one become truthful? And how can the veil of illusion be torn away?

O Nanak, it is written that you shall obey the Hukam of His Command, and walk in the Way of His Will.

A Shabad should be recited 11 times a day for a minimum of 40 days to experience its power. Recite in English or in Gurmukhi transliteration; both are beneficial. However, reciting in Gurmukhi allows you to better access the power of the mantra, and as the words are recited in proper Naad or sound current, the tongue hits the meridian points on the upper palate, effecting a change in consciousness. Work carefully to pronounce the words properly.