The dusty roads between Garhshankar and Jalandar teemed with life. Surrounded by serene wheat fields lined with wispy trees, thousands of people motored up and down the cramped highway.  They dodged affable but incessant sevaks demanding them to receive Guru’s langar. Their heads adorned with orange turbans in celebration of Holla Mohalla (Holla), the Sikh celebration of…celebration. I was tired and dirty and inspired.

Within two years of forming the Khalsa in Vaisakh of 1699, Guru Gobind Singh started the event that would lead to what we know as Holla Mohalla today. It was a time of war in 1701 when Guru Gobind Singh initiated two days of war games and poetry competitions. His decree was for Holla to be a day of fun and games. Holla means “military charge” and Mohalla means “procession”. (1)

As the years progress, it seems that Holla becomes an increasingly international affair. While staying at Siri Singh Sahib’s estate with the students from Miri Piri Academy, I met Nishan Singh. He was visiting from Russia. He had discovered gatka, Sikh martial arts, through his practice of Pilipino martial arts and came to Holla for a deeper experience of the Sikh world. Also, while wandering the dimly lit encampments of the ascetic warrior Nihangs, met groups from all around India and the world. I also noticed more European tourists than ever. I wanted to be in their heads. I have been to Holla and events like it since I was eleven years old. I would love to see the crackle of neurons flashing in the minds of a first-timer. 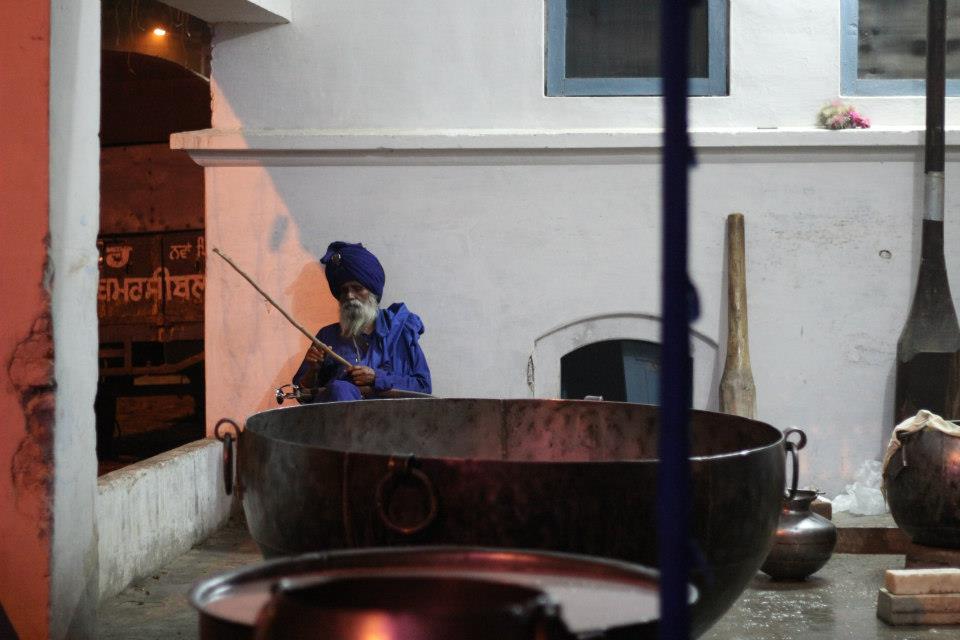 Holla is a world in and of itself. People come for so many different reasons. Entire villages pile on to tractors, literally lying on top of each other for hours of road travel to receive the blessing of the festival and enjoy the almost carnival like atmosphere. The Nihangs of every faction descend upon Anandpur as their time-honored duty. They set up camps, serve the sangat food, and prepare Sukh Nidhan: a drink made of protein rich nuts and seeds, healing herbs, and cannabis. I think a lot of people come for the Sukh Nidhan. But for the Nihangs, it is a sacrament to fallen warriors of all faiths who fought and died for truth. Others come for a party. For me it embodies the concept of ever-rising spirit: charh di kalaa. 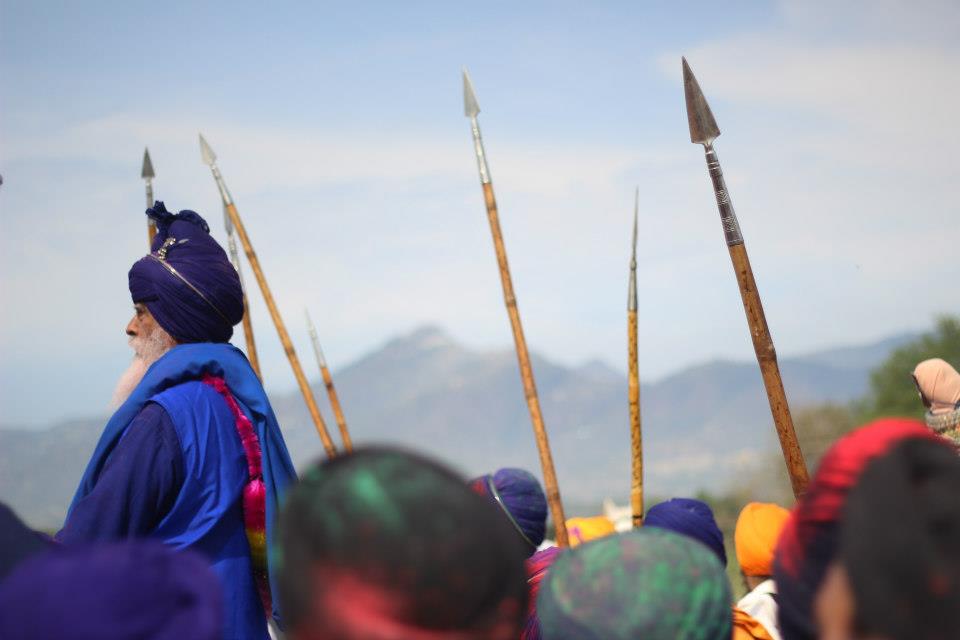 When the procession begins, it is Bedlam. Horses spook and kick where there is room to do neither as they are surrounded by people. There are tens of thousands of people crammed into tiny streets. People play gatka, loudspeakers blare from various floats, the crowd chants “Sat Nam-Waheguru”, and the intermittent jaikaras—call and response battle cries. The procession moves from gurdwara to gurdwara and finishes in an open stadium for war games. The Shivalik foothills play back drop while Nihangs attempt serious-injury-defying riding stunts while their horses gallop full speed.

Miri Piri Academy has the honor to run the procession with Baba Nihal Singh Ji, Jethadar of Tarna Dal from Harian Vela. The night before the celebration, his encampment invited Char di Kalaa Jetha to play. After an hour of simply chanting “Waheguru” with the whole sangat, Baba Nihal Singh leading, the Jetha played “As Kirpan”. The shabad is by Guru Gobind Singh praising multitudes of weapons as divine. In moments like that, it is easy to feel the power of bani. Sound and communal feeling and meditation are enough to get high. 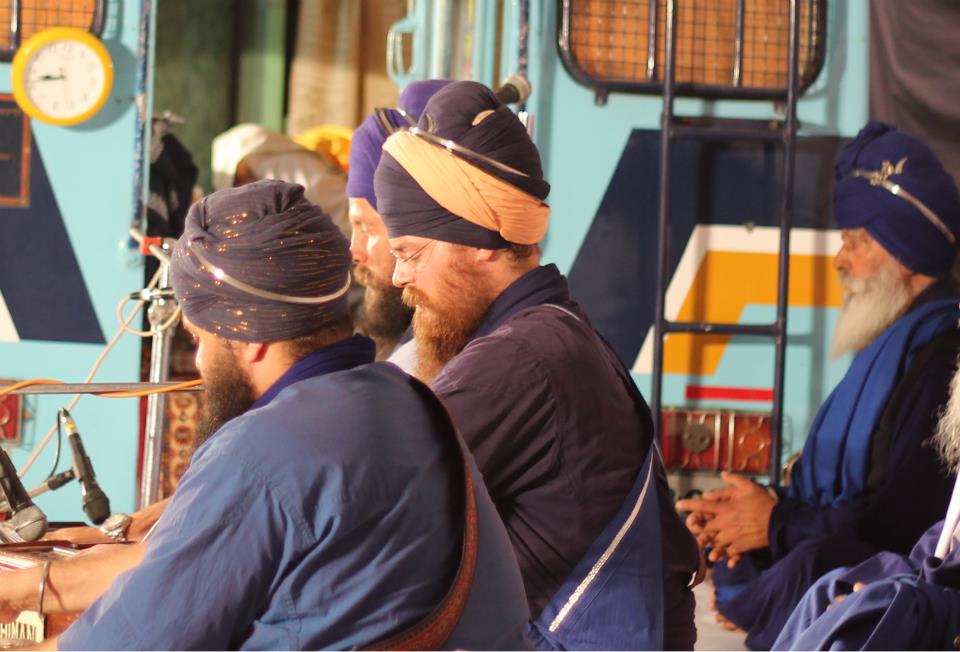 I think it would do any Sikh a lot of good to go to Holla, especially to spend time among the Nihang Dals (Armies). It is easy to go be among them and do seva. There is a lightness that surrounds their apparent severity. After all, they are warriors dressed in deep blue armed to the teeth.  I find it interesting too that while their personal disciplines are some of the strongest in the Panth, they are the most open minded on many things. I felt as though I was afforded a glimpse into an old Sikhi full of vigor far removed from the rigidity and pallor of today. Of course I am idealizing and all communities have their harsh realities, but we can learn joy and celebration from this old tradition and venerable community. 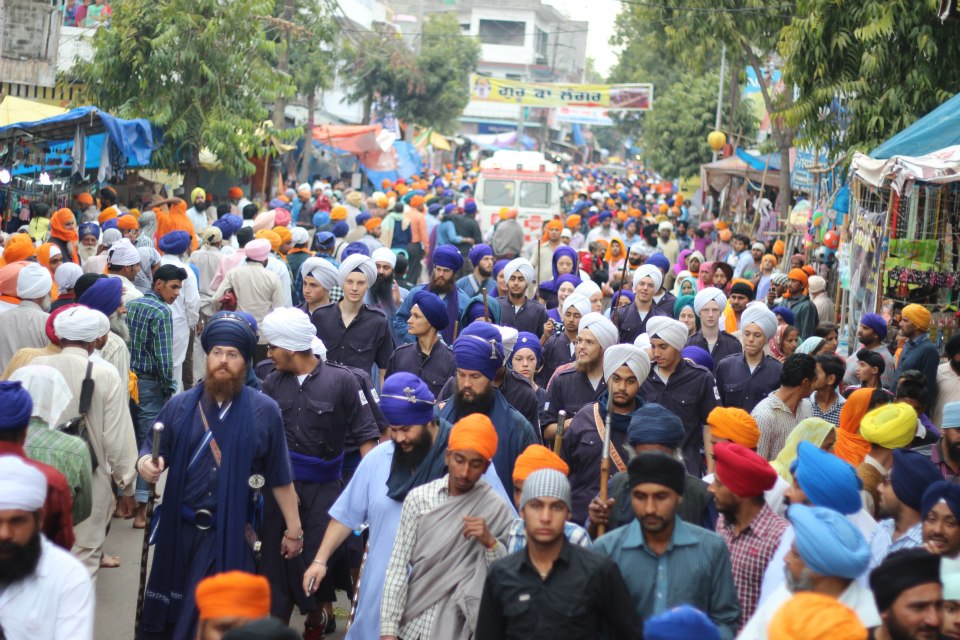 (2) For societal context of Holla in India today and in times past.