Today a very funny thing happened. While we were enjoying the music program, a very mischievous little bird flew in, and nibbled at certain people’s feet.  He ate a Wahe Guru Chew, then peaches— you name it. He stayed until the end of the song, and then flew away. Fearless bird.

It doesn’t matter how many courses I teach, or what I say to you, because ingrained in you is the one power that “I want to be.”

Now let me tell you some very simple words so that we may not have to prolong the discussion. “I want to be. I want to be secure. I want everything for me.”

Three lines can decide it: “I am a woman. I have a destiny. I have to cover the distance.” 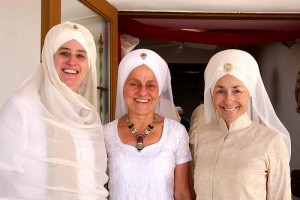 If you say anything other than that, you disqualify yourself. Now, you want to have sex, and you want to have a relationship, and you want to have children, and all that. Just remember if you are a female, the psyche will connect at the same frequency to give you all the provisions and effects. But if you use your emotions, your feelings and your tricks, you’ll end up in a wrong place. Period.

Do you understand what your problem as a woman is? Woman is a living, organic psyche. Woman is not a machine for intercourse, or a baby machine, or a servant to “his highness, the husband.” There is no such thing in a woman. Woman is a living psyche—vibrating, organic, original. All she has to remember is to live in the consciousness of: “I am a woman.”

It is a professional requirement of you. How many doctors will be successful if they forget their clients? A doctor is a doctor. When he’s on call, he has to go. An attorney is an attorney. A student is a student. A teacher is a teacher. This is called fundamental identity. And everything you use is called applied identity.

Remember those two identities. One is fundamental identity, that you are a woman. Applied identity is that you shall be nothing other than a woman.

What will that give you? After all, it’s a gain and loss business. If you are a woman, you will always get a very honorable, high, elevated man. You will never be with a cheap person. Because any frequency below two will never connect with you.

(Ed note:  The psychomagnetic field and the biorhythm of a human body determine at what state a person exists. People who get depressed and act shallow are the ones that are considered below one unit frequency. The total energy in our body that circulates between the Sun and the Earth is 3.5. Two is the desirable level. It is the same for men. There is no difference; we are speaking of energy.)

Secondly, you don’t have to go for prosperity; it will come to you. To be a woman is the last, highest incarnation. I don’t know if man has convinced you that you are a low grade this or that. But that’s not a fact.

Did I write you a letter to become my students? No, I didn’t care. You know, once I went to UCLA, because I thought perhaps there would be a job there. I went to the personnel office. I said, “Do you have a job for a wise man?”

The guy there looked at me like I was wacko. He said, “No, no, no, no. There’s no vacancy. There’s no subject called ‘wisdom.’ Go.”

Later on when I was teaching there, that same guy met me. I said, “Do you have a job for a wise man?”

He cracked up. He said, “Yes, professor, I understand.”

The ideal situation for you is that you need a parking gear along with your five gears. You call it neutral gear. In your personality, there should be a neutral gear where you are nothing but a woman.

Woman Within Woman Part 2: The Power is in Giving

Copyright the Teachings of Yogi Bhajan