The below text comprises excerpts taken from the book Heroes, Saints and Yogis: Tales of Self Discovery and the Path of Sikh Dharma, compiled by Shakti Parwha Kaur Khalsa and Guruka Singh Khalsa. 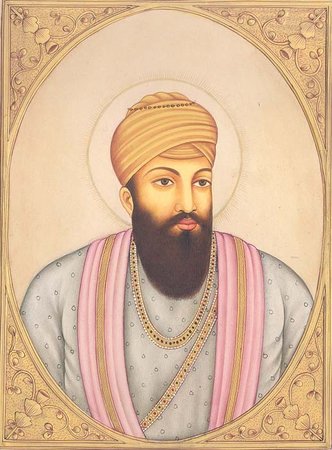 Lehna was the son of a wealthy trader, and he had been an ardent worshipper of the Hindu goddess Durga. While meditating on Durga early one morning, he heard his neighbor Jodha reciting a hymn, which stirred Lehna’s soul and opened his heart in a most remarkable way. As soon as dawn broke, he rushed over to ask Jodha where he had learned such divine words. Jodha told him it was a hymn by Guru Nanak. He went on to tell Lehna as much as he knew about this divine teacher who lived in Kartarpur.

This was at the time of year when Lehna customarily led a group of pilgrims to the temple at Jwalamukhi, devoted to the goddess Durga. On the way, Lehna told the others he wanted to stop at Kartarpur, so he could visit Guru Nanak. But the members of the group didn’t agree.

He was stuck. As the leader, he was supposed to continue the pilgrimage. However, he had such a great longing to meet Guru Nanak that he prayed day and night until one night he was no longer able to resist the magnetic attraction of the Guru’s divine light. He just got on his horse and rode. The next morning, he found his Guru working in the fields at Kartarpur.

Without hesitation, without looking back, Lehna began serving in every way possible. He worked in the fields; he served in the kitchen; he sat with the Sikhs joyfully singing Guru Nanak’s hymns. He soon went to the Guru and asked to stay with him and to become a Sikh. Guru Nanak told Lehna that before he joined him permanently he should return to his wife and children and settle his household affairs—which he did, making sure everyone was provided for.

On the day Lehna returned to Kartarpur, he was wearing silk clothes that were appropriate for him as the son of a wealthy man. Looking for his beloved Master, he hurried to the fields and found Guru Nanak standing beside three bales of hay that needed to be carried home to feed the cattle. The bales were wet and muddy from rains earlier that day, and the peasants didn’t want to carry them. Guru Nanak asked his sons to carry them, but they refused, saying they would send a servant back from the house to do it. Hearing his Master’s request, without a moment’s hesitation, Lehna picked up the dirty bales and bundling them on top of each other, carried all three of them home.

Of course, his silk clothes were covered with dirt and mud, and Mata Sulakhani, Guru Nanak’s wife, was horrified to see a guest in that condition. But Guru Nanak told her, “The load has been carried by the one who was fit to carry it.” Furthermore, he told her that it wasn’t dirt on his clothes, but saffron. Sure enough, when she looked again, that’s what she saw.

During the winter rains, one of the walls of Guru Nanak’s house fell down. He said that he wanted it rebuilt immediately, that very night. His sons asked, “Why not wait until the next morning when it can be easily repaired by the masons?”  Lehna volunteered to do the job immediately. Just as it was finished, all smooth and mortared, Guru Nanak passed by and said, “It’s all uneven.” Without hesitation, Lehna tore down what he had painstakingly built, and started all over again.

Once more when it was done, Guru Nanak looked at it and said he wasn’t satisfied with the work. Once again, without complaint, Lehna started from scratch. Guru Nanak’s sons watched all this, and told Lehna not to pay any attention to “the crazy old man.” Lehna ignored them and continued obeying the Master’s wishes.

Finally after many attempts, the job was done and met with the Guru’s approval. A teacher has to test a disciple’s obedience and ability to surrender. Yogi Bhajan told us, “To be a great leader; you first have to be a great student.”

The Third and Final Test

Guru Nanak had observed Lehna’s behavior closely for a long time, and one day he placed his hand upon Lehna’s head and called him Angad—a “limb” of his own body. It seemed pretty obvious that Angad would be Guru Nanak’s successor, but there was still another test that proved that he was the right choice for this exalted position of leadership and responsibility.

When Guru Nanak was out walking with his sons and a group of Sikhs one day, they came upon a platform on which there seemed to be a corpse covered with a sheet. Guru Nanak said, “Eat it.” Everyone just laughed at this shocking order. Angad said simply, “At which end should I begin, Master?” When the sheet was pulled back, it revealed food spread out on a table. Before eating anything himself, Angad offered food first to Guru Nanak and then the others, saying that he would eat whatever was left over. This principle of first sharing with others is known in Sikh Dharma as Vand ke chakna.

Angad was 25 years old when he became the Second Guru. He went into seclusion to meditate; however, after six months, he was convinced to return to active leadership. As a leader, he set an ideal example, living and serving as Guru Nanak had done.