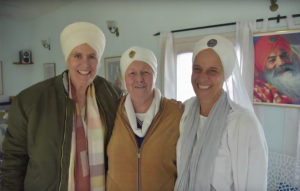 I have historically avoided yatras. They seemed like a lot of work and money for too much activity and rushing from place to place. In short, yatras were too much about doing, not enough about being. Kabir asks, “Is the pilgrimage greater or being God’s servant?” In Japji Sahib, Guru Nanak says that pilgrimages and other rituals bring only an iota of merit. One obtains salvation cleansing and meditating at the Sacred Shrine within the Self.

I always figured it was better for me to stay home and meditate. Other people went on yatras, not me. At the same time, my prayer has always been to transform the meditation in the home to a walking meditation in the world; to be a presence of the Guru’s love, which is the essence of the Authentic Self.

“If your presence doesn’t work, nothing will,” the Siri Singh Sahib told us. “A true spiritual person is one who lives for Infinity and whose presence creates peace.”

The Shabad Guru Yatra to Anandpur Sahib this past November was the perfect yatra for me. It was a yatra focused on two goals; building the Guru’s presence within by meditating on the Divine Sound Current, in all its many facets and experiencing the Guru’s presence in the sacred places that hold the memory and the legacy of that vibratory frequency. Here was the yatra of being, with the doing only to support the being. 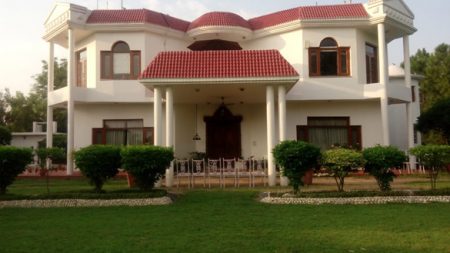 It was 11 days of being in the City of Bliss, living in the Siri Singh Sahib’s magnificent house and retreat center, Dashmesh Sadan, and taking a beautiful course called the Light of the Shabad Guru (level 2). The entire yatra was conceived and taught by two masterful teachers, Siri Sikdar Sahiba Sardarni Guru Amrit Kaur Khalsa and SS GuruKirin Kaur Khalsa, whose combined presence and expert tutelage definitely worked to create a space for deep spiritual and personal work; healing, sharing, intimacy and community. Ad Purkh Kaur Khalsa (formerly of Vancouver, now of Portland, OR) helped arrange all the logistics for a very graceful experience. She always had smile on her face. The doing or pilgrimage portion of the yatra was led by Dalbir Singh, our intrepid and incomparable tour guide, who regaled us with priceless stories of Guru Gobind Singh Ji and tales of living history of the area. He accompanied us to many of the Gurdwara Sahibs of Anandpur and Kiratpur and brought them to life with his colorful and animated discourse. Dalbir’s motto was “Every Gurdwara is a service station for the soul.” And so we were filled up at every one. Dalbir also brought along his lovely wife and precious 7-year-old daughter, Twinkle, who captured our hearts and infused us with her effervescent joy. 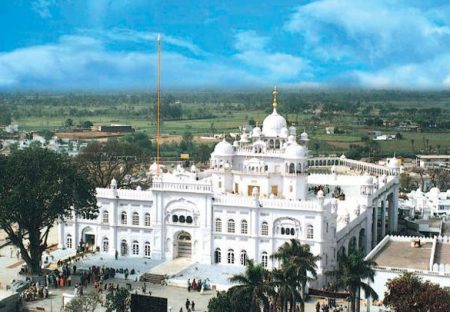 Each day began with a trip in the Amrit Vela to Keshgar Sahib, the Takhat where Guru Gobind Singh created the Khalsa. We arrived for Asa di Var to experience the Guru’s Prakash each morning. We became very familiar with the Sangat of Anandpur Sahib after days together in the Amrit Vela to witness and participate in a “call and response” form of chanting between the men and women after the Guru arrived each day. They began with the shabad, Darshan Daykh Jeeva Gur Tayraa (Seeing your Blessed Vision, I live O Guru) and ended with a rousing Dayh Shivaa, the exhortation to live righteously and courageously in the victory of the Khalsa with the blessings of God. This daily visit held us in its container of grace; a very inspiring and uplifting start to each day, which opened us to the work that was to come.

After personal reflection time, the morning continued with a delicious breakfast. All the meals were beyond fantastic at Dashmesh Sadan, whose management and immaculate upkeep and specially- tailored menu was due to the impeccable care of Siri Bhrosa Kaur, our very own resident spiritual nurse. Class was held in the yoga room. There were six of us in class, students and teachers, doing this sacred work together.

The Shabad Guru course was a perfect reflection of being and doing divinely interwoven. GuruKirin Kaur has developed a very complete roadmap in both her level 1 and 2 courses of the Shabad Guru for Radiant Spiritual Sovereignty. We dove deeply into 6 methods of applying this technology of the sound current, each of which represent deeper and deeper levels of being spiritually sovereign:

· Ardaas: being in prayer and surrender and knowing how to ask and receive

· Dhyaan: being in meditation and creating the heat of transformation

· Simran: being in a state of constant vibrational remembrance, and creating the steam that holds the ineffable Presence

· Veechar: being in a state of awareness, knowing and contemplation as in watching the movie of life to know what to take note of

· Bhrosa: being in a state of spiritual trust that gives spiritual endurance and tells you what you need in order to sacrifice, and finally

· Seva: being in a state of divine service to all, flowing from the fullness and bounty of all the blessings of the previous states of being

Sardarni Guru Amrit Kaur interfaced each one of these states of spiritual being with the exploration of a Sikh virtue. This grounded the experience by bringing us into doing and gave us practical tools with which to manifest these virtues in our lives. We started with prayer and moved to compassion, courage, reverence, dignity, and finally nobility. We worked on acquiring and practicing specific skills that related to each virtue. For example, we learned how to handle projections and judgments in our interaction and communication with ourselves and others. We learned how to deal with overwhelming feelings and feeling lost and trapped in our lives.

We learned how to practice forgiveness of self, others and of God. The forgiveness piece sits deeply in my psyche as it relates to reverence. Sardarni Guru Amrit Kaur blessed us with the sharing of her own work in this process, which begins with an intention to forgive an experience and be free of it. The process continues with writing out the story, owning it and being real with it. Forgiveness needs to be done over and over until one arrives at a place of gratitude. Gratitude opens the gates to the heavens and one arrives at a state of divinity. And in that rich moment of openness and gratitude, it is essential to remember to ask the question, “What is the gift? What do I walk away with?” If one can ask and receive at that point, a spiritual wisdom and maturity comes in bringing one to deep reverence. This was a transformative moment for me in the course.

All of us had the opportunity for intimate sharing and we were guided and supported by Sardarni Guru Amrit Kaur’s uncanny perception, wisdom and caring throughout the process. All of us created deep bonds of connection. 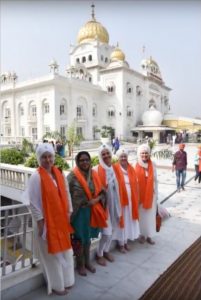 Afternoons were spent in motion, visiting and experiencing the places where these sacred teachings had taken root and grown. We spent time in contemplation at Bhora Sahib where Guru Teg Bahadur meditated for 27 years. We bowed our heads at Akal Bunga where Guru Gobind Rai asked the Sikhs to bow before the Will of the Almighty and be prepared for a struggle for freedom of faith and war against tyranny and injustice. We recited Rehiras Sahib at Guru Ka Lahore where Guru Gobind Singh got married. We paid our respects at Gurdwara Patalpuri where Guru Hargobind and Guru Har Rai were cremated and the ashes of Guru Harkrishan were brought after he died of smallpox in Delhi. And of course we stood on the bridge where the ashes of our beloved teacher, the Siri Singh Sahib were released.

With so many rich Gurdwara experiences, how could I possibly pick my favorite? One that is indelibly imprinted on my psyche is the visit to the Gurdwara of Bhai Kanhaiya, the Sikh saint and soldier of Guru Gobind Singh who gave water on the battlefield to all, friend and foe alike. When complaints of his succor to the enemy reached the ears of Guru Gobind Singh and he was asked to explain himself, Bhai Kanhaiya replied, “I see you alone my Master, in every person,” which greatly pleased Guru Gobind Singh. A modern Gurdwara was built in his honor by the British Sikhs and it has amazing acoustics in its dome.

We spent some time chanting there to experience the sound current. We practiced sending out the vibration in such a way that it was returned back to us. This was a powerful exercise. We practiced many mantras individually, and were captivated by the beautiful chanting of Ad Purkh Kaur. When it came to my turn, I was inspired to say that this was where I wanted “Akaal” to be chanted for me on my passing. GuruKirn Kaur brilliantly responded that since in reality there was no time and space, we could all chant Akaal for me right there and then. Which we did.

With my Akaal said and completed, I now feel complete and free to move about the Cosmos.

It was an unforgettable yatra, which I highly recommend to one and all. It gave me a better meditation than I ever thought possible anywhere on the planet. What I feel can be summed up by a hukam that followed Kabir’s original question, “Is the pilgrimage better or is being God’s servant?”

“So my brethren, the storm of Divine Knowledge has come. It has wholly blown away the thatched hut of doubt and even the bonds of mammon have not been left. Pause. The two props of double-mindedness have been thrown down and the beam of worldly love has been broken. The thatched roof of greed has fallen to the ground and the pot of mal-intellect has burst. The servant is saturated with the rain that has fallen after the storm. Says Kabir, my mind is illumined when I see the Sun rise.”

Thank you to Guruprasad Kaur from Los Angeles, CA, USA who shared this article about her experience on this yatra.