This excerpt about Ravidas Ji is courtesy of Sikhnet and written by Ramneet Kaur.

Bhagat Ravidas ji was a true and vehement devotee of Waheguru, whose devotion and ardent divine love poured out in the form of spiritual poetry. His compositions expressed deep love and strong passion for Waheguru and Guru Arjan Dev ji decided to include his compositions in Shri Guru Granth Sahib ji. The divine ditties of Bhagat Ravi Das ji in the form of 41 shabads in different raags are included in Shri Guru Granth Sahib ji Maharaj as Bani Bhagat de.

Bhagat Ravi Das ji was an inhabitant of Benaras. He belonged to a lower Chamaar class and his profession of making and repairing shoes was considered inferior in the society and his work was considered menial in those times. 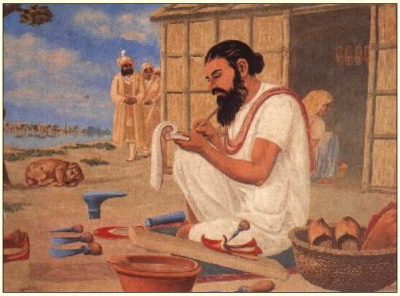 Bhagat Ravi Das ji was connected with Almighty Waheguru from his childhood only. He was an ardent devotee of Waheguru. He used to spend his lot of time in the company of holy people and he also used to spend his money to fulfill the needs of holy saints and poor people.

Bhagat Ravi Das ji expressed his passion and love for Waheguru through his divine poetry and music….He told the society of that time that a human being is recognized by his good deeds and not by his caste. He raised his voice against the wave of untouchability and caste system which was prevalent at that time. He advised his fellows that every human has the right to love and serve Waheguru. Devotion and service to Waheguru is done by pure heart and not by rituals.

By true love and devotion for Waheguru, Bhagat Ravi Das ji got elevated. By praising the virtues of Waheguru and keeping the company of holy saints, his status was uplifted in the society. By keeping Waheguru in his heart, he was revered by the people from other castes too and he became pious and was emancipated.

In this verse he is expressing his indelible relationship he has with his creator. He is saying, “I am in you and you are in me. We are a part of each other and absorbed into each other.” He compares his nexus with Waheguru to gold and bangle and then to water and tide.

By being immersed in devotion to Waheguru, he becomes a denizen of Begampura. By devoting his life and soul to Almighty Waheguru, he attains a blissful state of mind and in that state of mind he always feel happy and in euphoric state. This state of his mind is evident in his bani as:

The pivotal message we get from Bhagat Ravidas ji’s life is that, a human being is recognized by his deeds and not by his caste from birth. Bhagat Ravidas ji was a cobbler by profession, but he was connected to Almighty Waheguru. He was not entangled and engrossed in the vagaries of human life, but was ahead and beyond the petty things of human life. His intellect was way more than a normal human being and he could realize the divine presence and his bond with his creator in his life.