Editor’s note: This article was written in the 70’s and reflects the 3ho community of the day. This is in honor of the 12th barsi of Siri Singh Sahib Yogi Bhajan who passed away on Oct 6th 2004.

At about the time when Columbus made voyages a saintly young man named Nanak began travels on foot throughout India and beyond. Dressed partly in the garb of a wandering ascetic, he taught his gospel of humility, service to man and love of the One God. His tongue lashed out against the iniquities of his times, against the hypocrisy of meaningless ritual, the strife between Hindus and Muslims, the obsession with wealth and power, and the oppression of the caste system. He traveled as far as Assam in the East, Ceylon In the South, Mecca in the West and Tibet in the North. He came in contact with rich and poor, kings, thieves, sorcerers and spiritual seekers of many kinds. All of them he taught with compassion and understanding.

In his later years, Guru Nanak formed a spiritual community at Kartarpur. The disciples of Guru Nanak were called” Sikhs”, meaning seeker or student. The nine spiritual successors of Guru Nanak, each in his own time, elaborated upon his teachings. Each one demonstrated in his own life another way in which the teachings of Guru Nanak could be applied to daily life. They taught people to always relate to the Inﬁnite, to serve others and to respect woman as a manifestation of the Universal Creative Energy, Shaktee. They taught people to live together in group consciousness, for in the gatherings of people of good will could be found the True Guru, the Universal Wisdom.  The tenth Sikh Guru, Guru Gobind Singh (people tend to remember the man, but to forget the Truth that he taught) turned over the Guruship, the spiritual leadership, to the Siri Guru Granth Sahib, the collected wiitings of the Sikh Gurus and other saints and sages.

In California, in 1972, at the time of the Summer Solstice, a thousand young people who had been camping together in the mountains, stood at dawn to watch a white and gold ﬂag bearing the Aadee Shaktee, the seal of Guru Gobind Singh, raised above them. That morning, Yogi Bhajan their spiritual teacher of the past three years, spoke to them on Sikhism, the future of America, and the birth of a spiritual nation.

”I am working day and night. I have a purpose to fulﬁll, and that purpose is to lay the foundations of the future so strong and so perfect that time should not be in a position to crumble the walls. . . A nation is not built like a miracle. It is built with the blood and sweat of the people. When it is built, then it lives. We are going to build that nation. We sincerely mean it; we have no duality about it.” 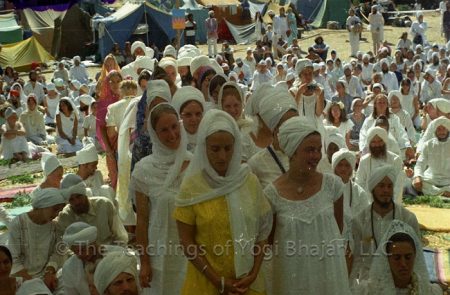 Later that week, many took the traditional Sikh vows: to rise in the early morning hours and praise God; to live naturally, leaving the hair unshorn, to live and earn righteously and to share with others; and to relate to the Word, the Siri Guru Granth Sahib, as guide and Guru. Others took vows as ministers of the Sikh Dharma, the Sikh way of life.

In 1969, when Yogi Bhajan began teaching Kundalini Yoga, students left their drugs in favor of this “natural high.” He taught Tantric Yoga to cleanse their subconscious minds of negative habit patterns of the past, He supplied them with a wealth of technical knowledge on how to live this life in the world with humility, grace and God-consciousness. In a short time, he had taught them a way of life.  Having supplied them with technical knowledge, he encouraged them to go out into the world and to stand on their own feet, not relying on him, or on any other man, for support, but to look always to the Guru within. He sent teachers to cities across the country to found ashrams themselves, for the training of other teachers. He encouraged them to prepare themselves to become leaders of the new age. 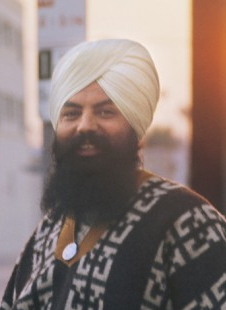 ” Those who will not serve the times”, he said,” will perish at the hands of the times.”

He encouraged his student-teachers to tie turbans on their heads so that their hair could be protected and could better perform its proper function of channeling solar energy, and so that the teachers themselves might stand out, thereby making themselves available to serve others. What the students, who had come to call themselves the Healthy, Happy, Holy Organization did not know, was that the way of life Yogiji had taught them, indeed his whole outlook, was drawn from the Sikh way of life, which he had learned from birth. 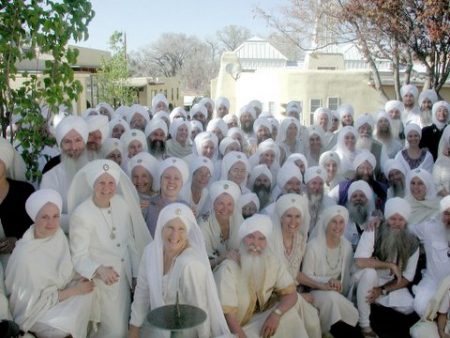 The transformation of the 3HO family from hippie, to yogi, to Sikh, was not a gentle one. As hard as it was for hippies to accept discipline and responsibility, it was at least as difficult for them to relate to a tradition which was older and bigger than they were. Haunted by the religious upbringing of their childhoods, the decaying institutions, the hollow rituals, the hypocrisies, they found it difficult to relate to anything traditional or to bow in humility before the wisdom of the past. Indeed, for many, this step was just too difficult to take. Others, however, sensed that 3H0 was more than a temporary association of individuals. They sensed that it was a foundation for the future, a seed of a future spiritual nation in America. They needed a source of wisdom and inspiration for themselves and their children: Yogi Bhajan would not be with them forever.

The binding, inspirational source which they found was Sikh Dharma. They understood that whether or not American Sikhism eventually succumbed to the rot of ritualism and hypocrisy which had been gnawing away at all traditional spiritual paths, would be determined by the extent of their own commitment.