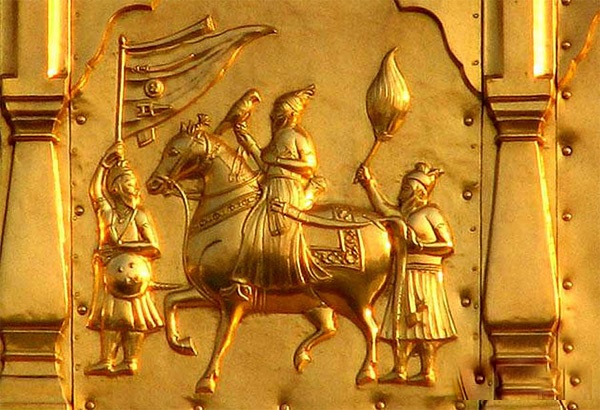 This is an excerpt taken from the book Heroes, Saints and Yogis: Tales of Self Discovery and the Path of Sikh Dharma, compiled by Shakti Parwha Kaur Khalsa and Guruka Singh Khalsa.

“Only when all other means have failed is it then righteous to take up the sword.” (Guru Gobind Singh)

Guru Gobind Singh (1666 – 1708), the Tenth Guru, was an outstanding example of the Sikh ideal of the “Soldier-Saint.” A courageous warrior, he was also an inspired poet, and a prolific writer. He is remembered as a valiant defender of the poor, the meek and the oppressed masses of India.

In times of battle, Guru Gobind Singh always shot arrows with solid gold tips. That way, if an enemy was killed, the man’s family would be able to pay for a good funeral and take care of themselves, and if the enemy soldier was injured, that gold could be used to pay for medicine for him and food to feed his family.

Gobind Rai, the young son of Guru Teg Bahadur, became the Tenth Guru on November 11, 1675, at the age of 13. He was the last of the Sikh Gurus in human form, because before his death, with his Khalsa name of Guru Gobind Singh, he installed the Siri Guru Granth Sahib as the next and perpetual Guru forever. The Tenth Guru molded Sikh Dharma into its present form with the formation of the Khalsa in 1699, and finished compiling the Guru Granth Sahib, which some consider his greatest achievement.

It is said that after the martyrdom of Guru Teg Bahadur, Gobind Rai declared that he would create such a spiritual family (Panth) that it would challenge the tyrant rulers in every walk of life to restore justice, equality, and peace for all of mankind.

As a prophet, Guru Gobind Singh is unique. His teachings are very scientific and timeless. Unlike some other prophets, he never called himself God or the only son of God or the messenger of God. Instead he said that all people are the sons and daughters of God, sharing His Kingdom equally. For himself he used the word “slave” (banda), which means servant of God.

“Regard me as one of His slaves and have no doubt whatever about it. I am a servant of the Supreme Being; and I have come to behold the wonderful drama of life” ~ Guru Gobind Singh

By the orders of the Mughal Emperor, Nawab Wazir Khan, in 1705, Guru Gobind Singh’s two youngest sons, Baba Zorawar Singh ji and Baba Fateh Singh Ji, were martyred by being sealed alive in a brick wall. His two eldest sons, Baba Ajit Singh and Baba Jujar Singh were killed during the prolonged siege of Anandpur that same year. Guru Gobind Singh himself was assassinated three years later by Wazir Khan.

Thus, the Siri Guru Granth Sahib became once and for all time the revered living Guru of all Sikhs, beyond all personality and human identity. The Tenth Guru consciously broke the ancient tradition of title by lineage and instituted the reality of legacy.

On October 20, 1708, Guru Gobind Singh, having consciously witnessed the sacrifice of the lives of all his four sons, handed over the sacred legacy of the Guruship to the Shabd Guru, embodied in the Siri Guru Granth Sahib. When he last spoke to his assembled Sikhs, Guru Gobind Singh said,“As ordained by the One Eternal, a new way of life is promoted. All the Sikhs are asked to accept the Holy Granth as the Guru. Guru Granth should be accepted as the living Guru. Those who wish to meet God, will find Him in the Word.”

The unique beauty of this is that the Siri Guru Granth Granth Sahib can neither be altered nor can it be changed in any way. It is a touchstone for all humanity that exists beyond the limitations of time and space, now and in the future.