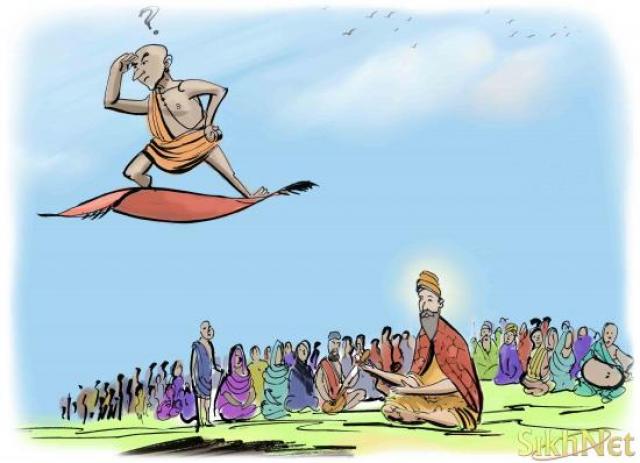 Guru Nanak, together with Mardana and Bala, his two friends who always served him, traveled together to the country of Kashmir. They came to the city of Sri Nagar. There the people knew who he was because of his grace and his light. The people were very happy and blessed to sit with him and learn from him. In that city there was also a Pundit named Brahm Das. He was very learned and through his devotion to the goddess he had gained yogic powers. When he heard that a great Guru had come to town he thought, “I don’t think I will be that impressed with this new-comer. It is I who has great knowledge and supernatural powers. I will show him my skill. Sitting on this carpet I will fly over to where he is and there is no doubt that he will be totally impressed when I arrive.”

Sure enough, he got on his carpet, levitated up and flew to where a large crowd had gathered around the Guru. Everyone seemed happy. He looked and looked but he couldn’t see Guru Nanak anywhere. He landed and asked the people, “Where is this ‘Guru’?” The Guru, with his sweet voice and beautiful face, was sitting right there, but the Pundit could not see him. The people were surprised and said to the pundit, “He’s sitting right in front of you!” But the pundit couldn’t see the beauty right in front of him. He tried to fly his carpet away but… it didn’t work. None of his tricks worked and he had to walk back on foot carrying his carpet under his arm.

Later he asked his servant, “Was the Guru really there?” “Oh yes he certainly was, he was so kind and beautiful and we all had a great time!” Everyone else seemed to understand and be filled with happiness but the learned pundit was confused, “Well if he was there, than why couldn’t I see him?!?” He was shocked when he heard the reply, “It is because of your pride that you could not see him.”

So the next day the pundit humbly walked on foot to meet the Guru. This time he did see the Guru among the crowd. The pundit bowed before the Guru, who is a friend to all. The Guru said, “Come sit over here.” Pundit Brahm Das sat next to the Guru and asked, “Respected Guru, when I came here yesterday… why couldn’t I see you?” The Guru said, “How could you see in such extreme darkness?” “Darkness? But it was broad daylight when I came here yesterday!” The Guru replied, “Is there any deeper darkness than pride?” These words struck the pundit, “Because you can fly you think you are so great. Look around, the birds can fly, the insects can fly. Do you want to be like them?”

The truth struck his heart and the pundit said, “Please forgive me, I see your wisdom great Guru. I have read sacred books and gained super powers but I’ll admit… I have not found peace and happiness. Please tell me how I can touch the feet of the Creator.” The Guru explained to him, “You worship gods and goddesses and just like humans they are temporary. You have followed men of great knowledge and you have become lost in that knowledge. That kind of knowledge which increases the darkness of ego, will not help you. Words are only meaningful when they are true and you live the truth they represent. All words are just symbols. Look within yourself and see the truth.”

The Guru sang a beautiful song…

“If someone is praised by all. If someone is powerful and tall. But there’s no internal sacred call, none of it matters at all. The Creator gives to all the same. Let us lovingly sing His Name.”

The truth dawned on the pandit.

“I have now learned to seek wisdom and happiness from inside and not from outside. In the future I will do my very best to get rid of my thoughts of self by serving others and remaining absorbed in the Naam by the grace of the Lord.”