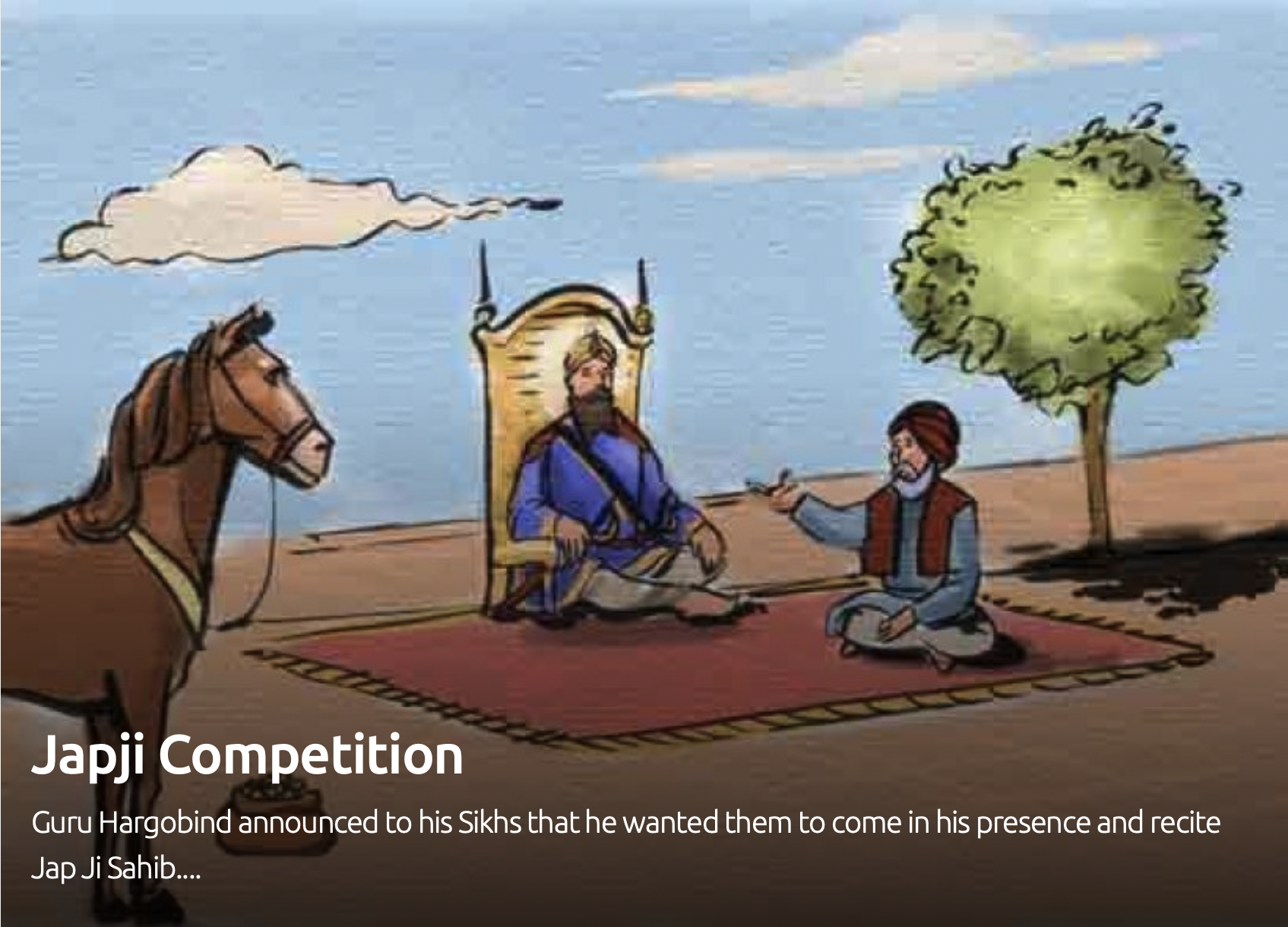 Guru Hargobind was the sixth Guru. He was very tall, very brave, and very handsome. He was a fearless and courageous warrior, but he also had the calm presence of Guru Nanak himself. He would talk about Japji and how it works. You know that Japji is the first thing that Guru Nanak wrote down for us, right? It is the most beautiful and sacred prayer.

Then one day, a man came in to sing Japji like everyone else. This man had great devotion in him, and he sang with deep purity and beauty. While this man was singing Jap Ji, the Sikhs of Guru Hargobind noticed that the Guru was slowly moving off his throne. They didn’t understand. Toward the end, after Guru Hargobind had gotten nearly completely off his thrown, Guru Hargobind jumped back onto his throne. When the man finished, Guru Hargobind blessed him and then offered him a beautiful horse and some gold for how beautifully he sang Japji Sahib. “Oh my God, Guru Ji, thank you so much! You’ve given me much gold and wealth and a what a wonderful horse you have given to me also! I am so blessed to serve you my King!” Then he bowed down to the Guru, took the horse and gold, and happily went back to his wife and his home

It was not very surprising to the Sikhs of Guru Hargobind that somebody would be blessed by the Guru with a gift of gold. But they were very curious about why the Guru was getting off his throne and then jumped back onto it while he listened to the man sing Japji. So they asked him, “Oh Guru Ji, Maharajan ke Maharaja, please tell us a true answer to this question. We don’t understand why you were getting off the throne and then why you jumped back onto it. Can you please explain to us why you did this Maharaj Ji?

Guru Hargobind said, “This Sikh’s Japji Sahib was so beautiful, he sang it with such a pure devotion and longing for God. He looked just like Guru Nanak when he sang. I was wondering how I could bless him for such perfect devotion. The truth is, there is nothing in this world that can compare to the Naam. The only thing I could offer him was the throne of Guru Nanak, which is immortal and beyond this world. What else could I bless him with? Being absorbed in this devotion, I began to get off the throne so he could sit on it.

Then, the man started thinking, ‘Oh, look at that healthy and expensive horse someone just brought the Guru! Oh and look, someone just brought him gold coins also. If the Guru is very much pleased with me, maybe he will give me the horse and the gold. I would like that very much.’ That is when I jumped back on the throne. You see, the gift of the Naam is beyond this world. When this Sikh of mine thought of worldly rewards, I knew that he couldn’t sit on the throne of Guru Nanak, which is immortal and beyond this world. The throne is priceless, and only one who is not thinking of himself can sit on it. A person who thinks of themself cannot sit on the throne which serves all humanity. Only the person whose mind is only attached to the Naam, every second of their life, only that person can sit on the throne of Guru Nanak.

The Sikhs understood what had happened, and they marveled at the Guru, for having such a perfect meditation that he could sit on this throne. Now you know the real value of Jap Ji. It is beyond anything in this life, it is more precious than life itself.