The Thirty-fifth Pauree gives you the breadth to do your duty and fulfill your responsibility. 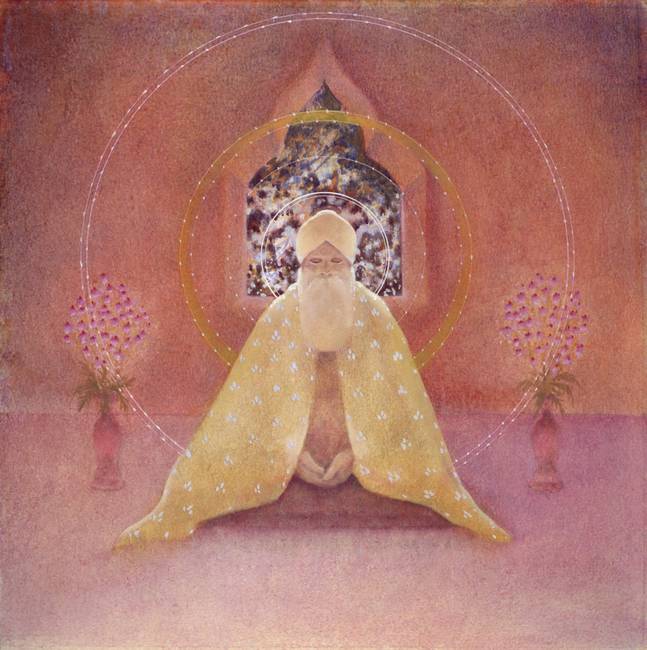 In the 35th pauree, Guru Nanak tells us about Gyan Khand, the realm of knowledge and enlightenment. He emphasizes the vast and unlimited nature of the cosmos by repeating the word kaytay, meaning limitless or uncountable. Gyan is the wisdom of spiritual matters and one who holds this knowledge is known as a gyani.

In the Realm of Knowledge we come to perceive that there are many worlds for clearing karmas. It is through this process of clearing one’s karma that beings are finally freed from the cycle of birth and death and merge wholly in the One. The wide-eyed manner that Guru Nanak marvels at the infinite expanse of the cosmos is innocent and almost childlike. He is in absolute awe of this limitless expression of knowledge, wisdom, and enlightenment. Guru Nanak exclaims in ecstasy, Naanak ant na ant! The cosmos is truly without end.

“Now in our life we have a fear of Ant. What will be your end? How will you be in your old age? How will you be in your young age? How will you be tomorrow? How will you be in the next hour? And some people reach to the point of insanity – how will be their next minute or the next second. But what Guru is saying is not what you are reading in the translation. He said don’t get into this ant because this world is created by the beant, the One who has no end. This world is a creation of the Endless.
This world is not a creation for the end, by the end, of the end. This world is of the Endless. The soul is endless; the soul is a part of Infinity and Infinity is a part of the soul. Soul takes a shape in the finite to experience, in finite, the Infinity. That’s the whole purpose on which the Sikh religion is based.”
– Siri Singh Sahib, Yogi Bhajan May 17, 1992 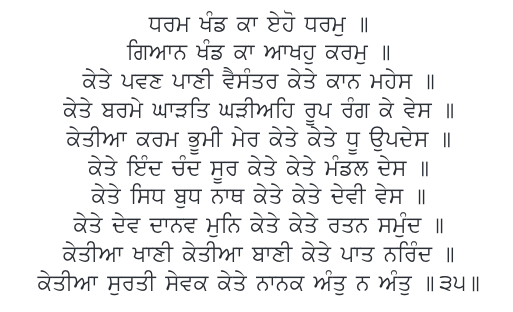 This is righteous living in the Realm of Dharma.

And now we speak of the Realm of Spiritual Wisdom.

So many winds, waters, and fires;

so many Krishnas and Shivas.

adorned and dressed in many colors.

So many worlds and lands for working out karma.

So very many lessons to be learned!

So many Indras, so many moons and suns,

so many worlds and lands.

So many siddhas and buddhas,

so many yogic masters.

So many goddesses of various kinds.

So many demi-gods and demons,

so many silent sages.

So many oceans of jewels.

So many ways of life,

So many dynasties of rulers.

So many intuitive people,

so many selfless servants.

O Nanak, His limit has no limit!

Enjoy these musical versions of of the 35th Pauree courtesy of the SikhNet Gurbani Media Center: