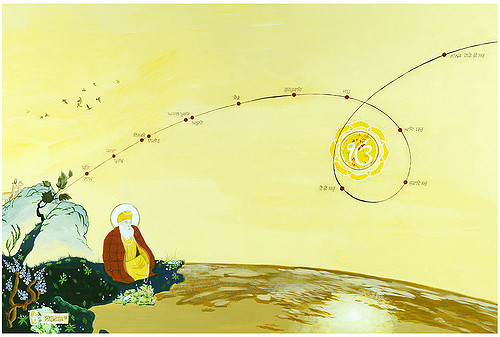 We have in Sikh dharma the base is called mool mantar. Normally in our life, our mind is not under control and mantra means something which can control the mind. Word mantra means man-tra.  Whatever sets the mind and the faculty of mind is called tra.  It means, brings the harmony; brings the balance. Tra is the word from word taal.  Taal means the, the harmony. You sing the music in certain notes and that you call is taal.  You call it notes and this way the sun is considered base in the life and sun is considered the base of the music, the harmony.  Because everything goes around the sun in a very great harmony. It is when the harmony on the orbit and the axle of the planet is out, the planet is out.  And within you the life as you prevail the life socially and you prevail the life personally, when that is out of balance, you are out, you are in trouble, you cannot be considered in harmony.

Tara is what brings the ultimate harmony.  Tarang is the projected wavelength of the harmony, when you project in a balance code. If I say that put a cannon here and fire at a certain longitude and latitude, I am giving the tarang to the gunner. I am explaining to you how the word means.  And mann tarang, how the mind project itself and then comes the word man-tra, what fixes the projection of the mind. The word mantra means a syllable, a code, a signal, a key, a sound which fixes the projection of the mind and that is what mantra means. Some people think mantra is some mystical word which we chant and it will do great things, because it will project through the mind the projection of that secret code.

So Guru gave us, Guru Nanak gave us mool mantra.  Root, mool means root.  The root of the mind can be projected how powerful it is.  And we have:

Some people only think the mool mantra is up to Gurprasad and some, Nanak hosee bhee sach, up to that.  But if you write down mool mantra from Ek ong kar in alphabets, you have to have one hundred and eight words.  That’s an essential second feature which some people forget.  But you know, I am not going to discuss it here and discuss this syllabical fight which is going on, so I like to cross that.

But basically, if you take Bihari, hosee bhee sach.  Bihari sounds as two, two sounds notes and then it makes hundred and eight. Sometime progressively right you will find.  That is why we think that we can go up to Nanak hosee bhee sach and it’s all right with us, but with some people who are technically key holders of the situation and that is almost to me it is a, it is a discussion which they enjoy to stimulate themselves.  But however, in this mool mantra, there is a one word Guru Nanak has said, it’s called Akal Moorat. Akal means the undying God. Para par Brahm, the God of Gods, the ultimate God, the source of all sources, the Infinity of Infinity and that is called Akal, which never dies.  Whatever is cause has a effect; whatever effect has to disappear.

Whatever moves, must stop; whatever is high, must have a low; whatever is right, must have a left; what is good, must have equal bad. This is the law of God, which you are supposed to accept and you don’t. You only accept with religion and without religion, God has a halfway. All good things come from God, from where the bad things come, from me? What are you talking about? On one hand you say God is all and then you say God is all, but my God is what gives me good.  That’s ridiculously making God cripple. So we all have a very, very cripple God. That is why, to satisfy you, Guru Gobind Singh even did the namaskar to roag, soag, vijog; sadness, disease and separation.  He bowed to it.  He saluted, because he believed that is also from God.

If you read the bani of the tenth Guru, Jaap Sahib, you will find all polarities are saluted. So Guru presented the wholesomeness of the God, which we are not willing to accept.  And this wholesome, how to accomplish this wholesome?  If we get the mool mantra in us, then the root of root is, our root is our soul.

In our one trillion cells, which have three trillion parts of it, there is a root which combines it and that is the soul, atma, pran shakti, prana.  Prana comes from the Pavan, PavanGuru.  That’s why Guru comes riding on the pavan, Guru comes from shabad.  Pavan means the power of the prana which makes you to talk or makes you to listen, makes you to see.  That is why word is Pavan Guru. Guru, the word, the prana, the sound comes on the pran, pran comes through the air. Some people think it is oxygen.  Oxygen is always there.  You pump the oxygen in the body, will a person live forever?  That is not true. Prana makes the oxygen come;  prana makes you to live.  It is the basic force, elementary force and it’s the root of the human body, human mind and it is the soul.

……So I mean to say everything has a one aspect to it, good and bad but looking at the bad aspect and bowing to it… When I see something wrong I bow. I said namasting, I said namo because I see bad and I was seeing bad and I am ‘Thank God, I am not doing that bad’.  That’s where I thank.  And when I see very good, I know I am not that good also, but I am, I am grateful. I bow to that because, I see something great.

So great and not great are always there. It is for us to see and salute both and learn from both and that will nurture our root and that is what we call mool, root, mool, total sum, mool, the basic self, the naked self.  The soul is called mool, mantra means which projects the mind in the direction of that. Now seeing that in that mool mantra of the Sikh there is a one word Akal Moorat.  Akal which is not subject to kal.  Kal means death.  Kal means time.  Time means you come and you go.  That is how you measure the time.  Life and death makes the time phase.  Sun rises and sunsets.  That’s makes the time; that’s makes the day.  Moon, it’s all circulation of time and that is called kal.  Desh means the space; kal means the time.  When time and space meets, vidi bandia, then things happen, action happens.

So we have a mool mantra, but in that mool mantra the most important thing is Akal Moorat, ‘you are the picture of deathless God’.   That’s exactly what literally it means. Guru Nanak said it and Guru Gobind Singh gave it. Guru Nanak said it.  It was said by Guru Nanak.  Akal Moorat.  It is in the mool mantra.  It is the very root lesson of us.  Akal Moorat.  And Guru Gobind Singh gave us and we in the west call it bana. Now question has been asked, when we wear bana we separate ourself and we freak out lot of people and I am going to answer those two questions. We separate ourself, true.  We separate us, because Guru says us to be separate; not to harass people, but to serve people. You only want to remember one part of it.  You do not want to remember the second part of it. You have been dictated.  You have been told to separate yourself, to serve, to love, to elevate others. You have not to be told to separate yourself, to bug others, to play holier than thou others, to put down others and to insult others.

If what I am saying is not true, then why a priest should wear the habit?  Habit means this is his daily way of life.  Habit means habit, habit don’t spell anyway.  Habit means it is my habit and he wears a habit.  His habit is to wear that habit so everybody knows he is a padre, he is a father.  So everybody can talk to him freely and understand that this man is separate.  He is not a man.  He is a man, he is a father living in the body of a man and it is habit he is wearing, so that the entire congregation may know where he is. So when you wear a bana, you are in a great difficulty.  I appreciate that because you are separate and people approach you with the idea what are you doing…..