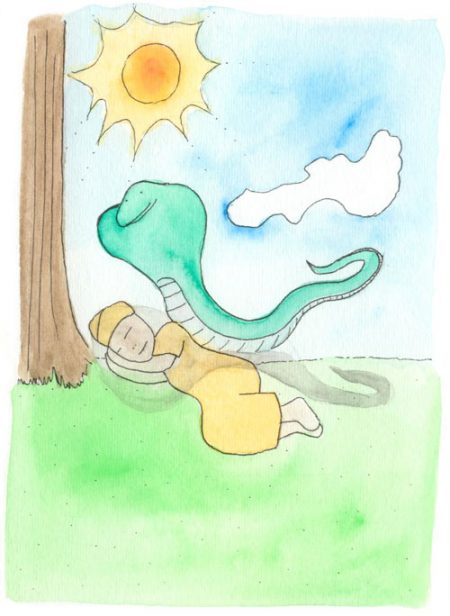 When Nanak was a child he loved to meditate on God. Even when he was sleeping, he was with God. Once he fell asleep under a tree. The tree was shading his face from the sun. As the day passed the sun moved and the tree couldn’t protect Nanak’s face from the sun. His skin was going to get burned by the hot sun. When someone is with God they are actually with everything there is, because God is in everything. All the animals, birds, fishes and even snakes are reminded of God around a person of God.

When the child Nanak was sleeping under a tree a big poisonous snake called a cobra saw him. It was a really big cobra with a huge hood. The cobra saw Nanak in his divine sleep and noticed something. The sun moved so the tree wasn’t giving shade to the child anymore. The cobra thought, “I wouldn’t want him to wake up becausssse of the hot ssssun! We are all here to sssserve God’s people. Thissss boy issss very holy and I shall sssserve him. The cobra spread it’s hood over this great child to give shade from the hot sun.

While the cobra was hovering over him like this, someone came riding by on a horse. It was Rai Bular who was the head of the village. He thought, “Dear God! There is a huge cobra over Nanak. I must go and rescue him from being bitten. That child is very special, I have to protect him!”

As Rai Bular rode over to rescue Nanak, he noticed something odd. He felt how the child was in a divine sleep and the cobra seemed like he was meditating too. Rai, Bhullar thought, “It doesn’t seem like a dangerous situation, it actually looks like a peaceful scene. The snake was just making a shadow for him with his hood spread out and he didn’t move in as though he was going to bite. Not only was the snake not going to harm Nanak, he was actually protecting Nanak from the sun. Great are the saints of God!

When Rai Bular saw this he felt overwhelmed. It was so beautiful and precious! It was so sweet and sacred. It was so amazing. He never forgot that day. He always loved Nanak very much.