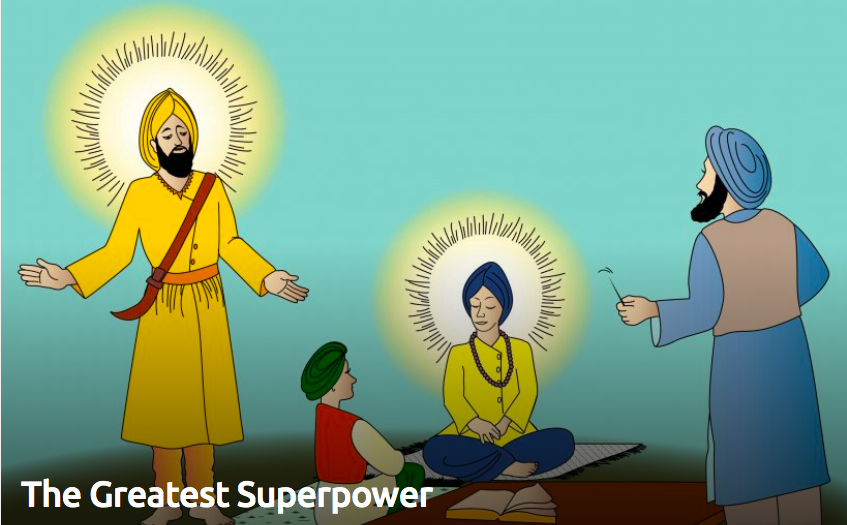 Have you ever heard of Super Powers before? Not super powers from TV or the movies, but real people who have super powers. Perhaps you’ve heard of people who could raise someone from the dead or be able to stop the rain from falling, or make gold appear out of thin air… All over the world there have been many people who could do these kind of things… in real life.

Someone asked the Guru, “great Guru, both of your children are very handsome, they’re both very intelligent, and both are very spiritual & humble. How can you possibly decide which one will be the next Guru?” Guru ji came with him to where the two boys were and told him to do a test as the boys were reading from the Adi Granth.

“Take a needle to the table where they are reading the Granth Sahib. Try to poke the needle into the wood of that table. If it is read with love, everything will become soft and the needle will easily go in.” And the man replied, “Yes Sir, Wahe Guru!”

So the man saw the younger son, Baba HarKrishan, reading, “Ik Ongkar, Sat Gur Prasaad, slok Mahula Panjvaa . . . ” Baba HarKrishan read with great devotion and love. As the boy was reading the man came to the wood table and slowly put the needle there. It went in, smoothly, as if the wood was made out of wax! And the Guru said, “HarKrishan my son, please explain to everyone the meaning of what you just read.” Then Guru HarKrishan replied, “Yes father, God is in every heart! Once the heart remembers it’s home it is happy and we are God.” Baba HarKrishan’s explanation filled everyone with bliss. People were blown away. 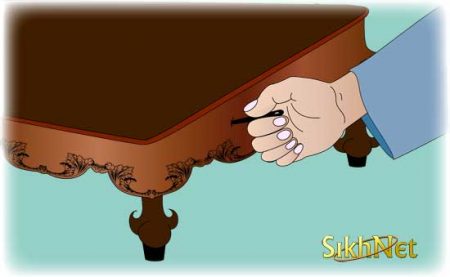 Then the older brother, Baba Ram Rai, took the seat and started reading the same section. “Ik Ongkar, Sat Gur Prasaad, slok Mahula Panjvaa . . . ” RamRai read very beautifully and sweetly too. As he was reading, the man tried to pull the needle out of the wood, but it was stuck.  It wouldn’t come out! The wood had gone back to being hard, just like normal.

The Guru said, “Ram Rai my son, please explain to everyone the meaning of what you just read.” And Ram Rai replied, “Yes father, this section was rather eloquently explaining something you may well want to understand. The chatrik  bird is famed for it’s particular behavior . . . ” Baba Ram Rai’s explanation was very convincing and everyone was so impressed.

This time the man tried to take the needle out of the wood, and it came out smoothly without any effort. He said, “Huhahah, Wahe Guru! Wahe Guru! How did this happen? It is so beautiful! Wahe Guru!”

How did the wood melt? Why did it become soft like wax? Why could the needle only come in or out when Baba HarKrishan read? No one else seemed too sure which of the boys would be the next Guru, but a few people now knew. They saw with their own eyes which of the boys had more love.

Later it became known that Baba Ram Rai had spiritual powers. He could read minds; he knew about people’s past lives; he could make correct predictions about when someone would die; he could become weightless and he could make jewels appear out of thin air; he could make himself invisible, so one one could see him and many many other things. Many people were amazed at him and thought he was a great holy man, but they were only looking on the outside; they weren’t looking on the inside.

Baba Harkrishan became the next Guru when he was five years old. He became Guru HarKrishan, the child Guru. Can you imagine a 5 year old boy being a great leader of people? Guru HarKrishan was truly a great leader. And true power is something you never see; it lives inside.