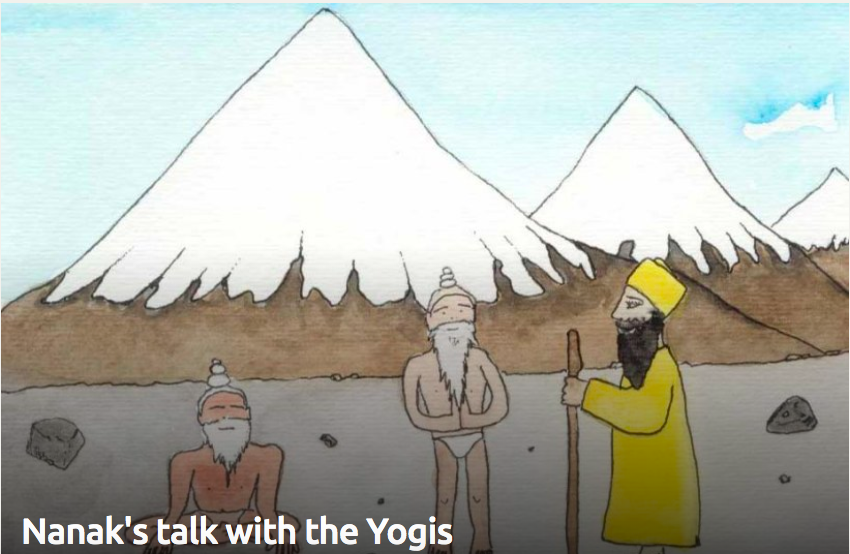 When Guru Nanak went out to the world he began spreading his message. He went to many spiritual centers, and everywhere he went he helped people and enlightened their minds. Many times he confronted the priests in charge and talked them out of blind rituals in favor of an honest true longing for the Creator.

Once he visited a sacred site high in the Himalayan mountains. Recognizing his spiritual light many yogis came to see who this young new comer was.

First they tested him. As he and Mardana were approaching a lake in the mountains, they started to hear strange sounds. Soon ghoulish figures appeared and tried to frighten them. Guru Nanak paid them no head. Soon the Yogis started to emerge from the forest and caves.

Charpat the Yogi said, “Well boy, have you come to join us?” The Guru said, “Join what? A group of people running away from the world?”

The Yogi said, “You seem like a true spiritual aspirant. If you want to complete your spiritual journey you have to renounce the world. Renounce your desires and join us.”

The Guru said, “You have not renounced the world, you have run away from it. The world is on fire. You have the knowledge of how to put it out. What kind of spirituality is this that leaves humanity to suffer?!”

Charpat gently said, “Look here son, take this urn and fill it with water from the lake.” So Nanak took the urn and went to the lake. When he got there, there wasn’t any water. The lake was full of rubies, diamonds, gems, silver and gold.

He came back to the Yogi with an empty urn. “Well boy.” Said Charpat, “Did you bring back water from the lake?” The Guru replied, “I couldn’t. There wasn’t any water in the lake.” Charpat was actually tricking the Guru and he passed the test.

He wasn’t afraid of the scary figures and he wasn’t tempted with the gold and wealth. One of the Sadhu’s said, “You really are great, why don’t you join us here. This is the way to true spirituality.” The Guru said, “Let me ask you Sadhu . . . you know how to levitate in the air, you know how to manifest material, you have many spiritual abilities . . . has this brought you closer to God?” Everyone was silent.

Guru Nanak continued to reprimand the Sadhus and Yogis for leaving behind humanity. He fearlessly spoke to them in a way that no one had before.

He told them, “Renounce the world while being in it, that is what is intended for us by our Creator. We must live house holders’ lives and help other people.”

They would have a teaching to counter him every time, they would tell him that he must be a renunciant like them. Every time he spoke a simple and common sense truth. Many considered him an enemy. They even threw rocks at him.

Some hearts were moved and some expanded their views. Guru Nanak left the mountains after confronting the Yogis and took the next step of his journey. Shining a great light onto the world he continued to spread his message of universality.