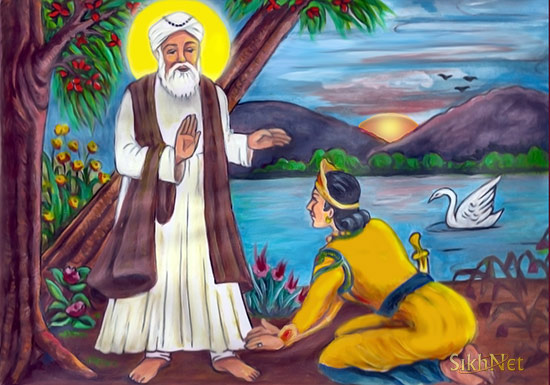 There’s a kingdom at the southern tip of India, an island kingdom called Ceylon. At this place, lived a very rich raja and he wanted to know more about God, and he had heard of Guru Nanak.

His friend had told him about Guru Nanak, saying, “A holy man with sacred knowledge is sharing some very deep experience with people. He says that if you can’t see God in all, you can’t see God at all. His name is Guru Nanak and he shares with everyone.”

And the raja said, “humm, that is just the person that I would like to meet and know and learn from. How can I meet him?” The friend replied, “If you pray very sincerely with just love in your heart I think surely he will come.”

Then the raja said, “I will do that, I will do more than that. I will make something grand for him. Tell me about him, what does he like?” And the friend explained, “Well, Guru Nanak loves to be under the trees, under the stars. He loves best of all to be outdoors with nature.”

Then the raja replied, “The very best thing for me to do is build a beautiful place for him, and I will pray very hard and he will come.”

So he did. He made this beautiful garden, with lots of big trees, shade, and a little sparking brook going through the garden, and it had all the flowers and all the things, a beautiful wall around a nice ornate gate. And he began to pray every day, pray for Guru Nanak to come.

And they would come into his garden and each time he would be excited and think it was Guru Nanak but when he came he knew by the actions of that person that it was not the Guru. And he decided, “Well I can’t waste my time coming down and checking all these people out anymore. I know, I will create a test for them.”

So every time someone would come into his garden and sit and meditate and act as a holy man, and perhaps some were very good, and perhaps they were charlatans or playing tricks on him just for his money. He never bothered to find out, he just sent his dancing girls.

And they would say, “woohoo, he’ll never be able to resist us.” And wine and food and test the men out. And every time they failed, of course, they ate too much, they drank too much, they enjoyed the beautiful girls, saying, “heheh ha ha, oooh please come sit down, rest. You must be tired from your travels. Would you like something to eat, drink? Maybe some music for relaxation. We can dance for you… uhh, some holy men these guys are! They’re not holy at all!”

And he knew that was not the Guru, as the raja said, “I’m not going to bother with this anymore! The Guru doesn’t seem to care, I guess he’ll never come. No more testing people, it’s a waste of money, from now on, no one is allowed in my garden anymore.”

And the months went by, and the years went by, and the raja was very very disappointed and sick of it all. He neglected his garden, he didn’t take care of it anymore, and the weeds grew up and the trees grew weak. And everything looked all deserted and strange and no one went there any more.

And then the time came when Guru Nanak was in the very south of India, and he said to Bala and Mardana (his traveling friends), that had been with him since he was a boy, one Hindu one Muslim….

He said, “We must go across to Ceylon. There is a friend waiting for me.” Mardana then asked, “but my Guru, how will we get there?” And Guru Nanak said, “Well, if the name of God, Sat Nam, can take you across the terrible ocean of life and death – surly, it can carry us across to Ceylon.” They all said, “Sat Nam, Waheguru.”

And they started across and the waters opened, and a path was made and he walked in the water through the path to Ceylon.

And when he got to the city where the raja lived, he of course went straight to the garden, the gates opened and in he went. Immediately there was some sparkle and shine in the whole area. And the plants began to perk up as if they had been given a wonderful drink of water. And trees stood straight and all and shady and the little brook began to bubble and spill its water once again, and everything looked very very beautiful.

Guru Nanak sat under one of the beautiful trees, Mardana began to play, and Guru Nanak began to sing of God’s Love.

Someone walked by and looked in through the gates and saw this scene, and was totally amazed and ran quickly to the raja, saying, “Oh you must see. Its amazing! Someone has come and your garden looks beautiful again.”

The raja replied, “Every time another holy man comes, everyone gets excited. I’m not impressed. Call my dancing girls. Send them in with special food and don’t bother me anymore.”

The man did it, he got them dancing girls, oh were they excited, saying, “Woohoo, he’ll never be able to resist us. Haha, Yaaey!” It had been quite awhile since they’d been able to flirt and dance and they were all excited. And they put on their full skirts that twirled around, they put on their bangles and bracelets and they giggled and laughed as they headed toward the garden area. And they were just having the grandest time thinking of all the things they were going to do to make this person look very foolish.

But when they came to the gates, and they came through and they saw the Guru immediately all those thoughts were gone from their minds. They expressed, “Wooah, it’a a miracle. Wow, yeah! Do you feel that? It feels holy.”

He knew these dancing ladies loved their job of  teasing men, so he ran quickly to the raja and he said, “Now you have to come my lord. You have to come. This is a miracle, I cannot believe it with my eyes. You have to see it!” And the raja replied, “Well, I better go.”

He could see the dancing ladies siting gracefully as the grace of God, at the Guru’s feet, but he could not get in and he knew that this must be Guru Nanak.

And the raja said, “Uhhhhh! I closed my gates, I closed my hospitality to guests. I even closed my heart. I closed my prayers, I closed the most important thing there is. I closed my faith in the Guru. Now I am being closed out. Auhh! I’m getting what I deserve. But seeing the Guru and not being able to be with him is like torture. Oh God, I pray, please forgive me. All I want is to see the Guru.”

And then he felt so ashamed in his heart that he had not remembered and kept up, that he had gotten diluted and lost his faith that the Guru would come, and he had tricked so many people and he had acted so foolishly. And the tears were streaming down his face, as his heart was truly humbled.

And the gates swung open! And he went and fell at the Guru’s feet, and begged for forgiveness, and of course Guru Nanak touched him and sang to him. And the raja said, “Forgive me Guru Ji, I am the biggest fool of all. I doubted you, I was just trying to test you, please forgive me. Please, please forgive me.”

And he begged the Guru to stay and teach him, saying, “Please stay, don’t leave yet. Please stay for awhile.”

And Guru Nanak did stay, and all the people came. And from that day on, this man had an open heart; he shared with all, his garden was open to all, his langar was always available and the dancing girls served with humility and grace.