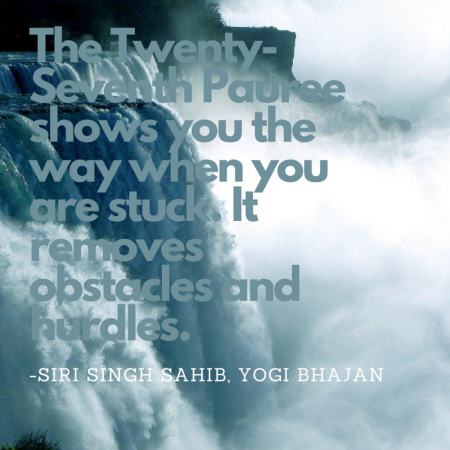 “When you are stuck and you cannot see the window of opportunity before you, the twenty-seventh Paurī shows you the way.  It removes obstacles so you can leap over hurdles.”

Reflections on the 27th Pauree from Sat Hari Singh Khalsa: Where God Lives

In the beginning of the 27th Paurī Gurū Nānak tells us about the gate to God’s home. Everybody now is interested in getting information about God’s home, like a Google Map to God. They are perhaps more interested in receiving a miracle than a description of the path. At least we get to know, that it is a very beautiful place full of musicians, orchestras, Rāgis, and singers, with all kinds of musical instruments playing.

But where is God Himself, where is His dwelling? We know from some teachers’ tales that God actually became totally bored by us humans coming to him over and over again, in endless rows asking the same stupid questions about enlightenment, or placing wishes before Him for more beautiful or understanding partners, and faster cars.

He chatted with Shiva about a place, where He could hide, so that no human may ever find him again. They tried the highest Himalaya Mountains, but then the Chinese came to Tibet. He moved to the loneliest islands in the wide ocean, but they became the most recent destinations of the cheap airlines.

Now, where to go from here? So Shiva had the brilliant idea to make God hide in people’s inner being, because that will be definitely a place no human will ever look for God. It worked. God is gone. His home was absolutely unknown.

But as God is endless creativity, he cannot just stay silent. He needs to spread his creativity in thousands of different cosmic frequencies, sound currents, Bāṉīs, Shabads, children’s songs, melodies, mantras, vibrations, music of the spheres. So he makes everybody sing and lets everybody enjoy the joy of singing.

People start saying: “God loves us, when we sing,” because God is love. People learned that God must be near when they feel joy in their hearts. And actually there is no one in the whole universe, who wants to miss out on that joyous loving feeling.

Therefore every body, every cell, every being, every molecule, every mineral, flower, animal, angel, goddess, solar system is participating in God’s great chorus and overflowing with joy. Everybody can feel that love in their hearts while participating in his wonderful universal singing symphony. 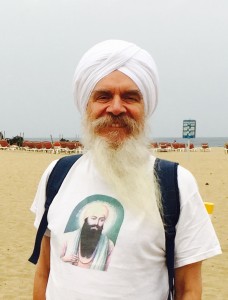 He holds a degree in Education and Arts from the University of Hamburg, but decided that the true nature of teaching was to be a Yoga Teacher. Yet, in the beginning of his career he served at Golden Temple Restaurant Hamburg as a baker, waiter and manager, as the Ashram needed a solid financial foundation. In 1986 he started the EU Yogi Tea Business.  His love has always been the song, the Shabd, and he recorded ‘Soul Rise’ Sadhana, ‘Servant of the heart’ and ‘Song of the Soul‘ (with Hari Bhajan Kaur and Thomas Barquee). Lately he inspired the Golden Temple Teahouse, the German Kundalini Yoga Festival and the Guru Ram Das Aquarian Academy into life.