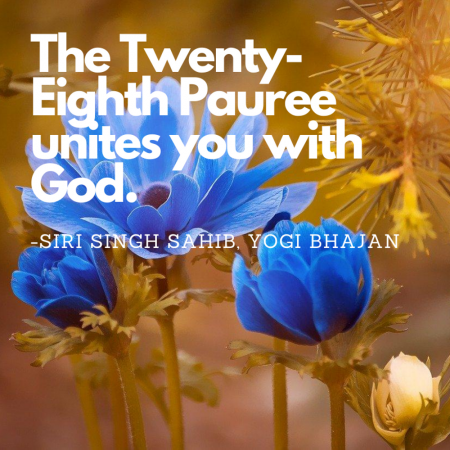 “The twenty-eighth Paurī is the strongest permutation and combination of words in the world. It unites you with God.”

Reflections on the 28th Pauree from the Siri Singh Sahib, drawn from a lecture given at Khalsa Women’s Camp (2):

This Pauri from Jap Jī is very important. Mundā santokh, tolerance and unlimited patience, is the highest power you can have. Mundā are the earrings, which yogīs wear in the solar center to denounce the world. It is the sun meridian point: this little lobe represents your head with the central part of your intelligence in the center. When it is pierced, intelligence is denounced. It can seal up again, but the nerve is gone. Yogīs do it. With the extreme patience it takes to wear the mundā, you declare your tolerance; you are absolutely calm, quiet and peaceful. You have denounced your own ego, your own intelligence.

Saram pat jholī, a bag hanging in front is a jholī. Saram means very conscious about it. You have the deepest, the highest commitment and it is conscious, it is the jholī. You haven’t been forced or told by somebody. It is not a fake or fashion. It is your highest commitment.

Khinthā kāl ku-ārī kā-i-ā. Khinthā are the two sheets worn underneath and over to cover your entire body. Nobody can take it off. Khinthā is kāl or death. Your body is standing against that cover of death.  Khinthā kāl is the death cover around your body. Your body cannot die, if your Radiant Body is not weak. So long as your Radiant Tenth Body is in this perfect alignment with you, the Prānic energy can continue.

Ā-ī panthī is a yogic sect, who believe in the manifestation of God. They are very powerful, humble and highly intuitive, knowing people. Panthī means the path. Sagal jamātī, all classes have a direct communication with God.

Man jītai jag jīt. If you win over your own mind, you will win the whole world. But, first, how do you win the mind? One is a path of Bhaktī or devotion where you give your mind to the Gurū, take the words of the Gurū and proceed. You don’t use your own intellect and intelligence. When you want to sell yourself, you can’t win your mind. When you are on sale, there is a bargain. Life is a business. Sometimes you sell yourself. You go for an interview and especially dress up. You want to look so that they will hire you, though after a week, they will be sorry. But at that moment you want to convince the world that you are the best.

God said, “You have to conquer it. It is your mind. I gave it to you. Keep it as yours.” Nānak says, man jītai jag jīt. This means if you can keep your mind as yours alone, the universe will serve you: one hundred and eight Elements, five Tattvas, three  Gunas, and the Ten Bodies. 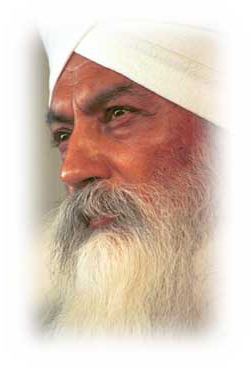