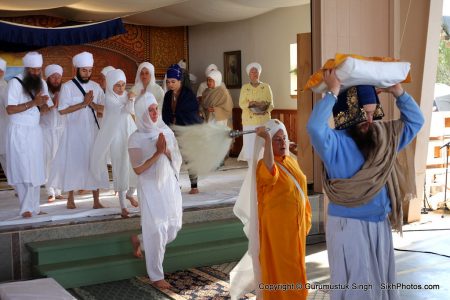 The impact of the Shabad Guru comes from its masterful use of the technology of sound and rhythm. It is a “quantum technology.” A technology is the application of a science. The sound patterns of the Shabad Guru are based on the science of sound. In the West this would be the science of reflex to create changes in neurotransmitters to command the state of the brain and mind. It is “quantum” because it manipulates the smallest particles of sound and energy into effective combinations and patterns. It uses the quantum patterns like seeds that act as blueprints for constructing larger patterns. The atoms of sounds build the molecules of language, thought and mind.

In time we will unravel many of the mysteries of this complex relationship of sound, brain, neuro-endocrinology, psychology and behavior. We will elaborate an intellectual model of the entire sequence of quantum sound technology. From the movement of the tongue to its reflexes to the neuro-endocrine cascades to the change of mental state, we are at the beginning of that study and modeling process.

The techniques of the Shabad Guru codified in the Siri Guru Granth Sahib wait for us to mine their secrets. Every person can use them to elevate themselves, to heal, to develop stamina, to increase intuition. They do not need to know the science of the process. They only need to apply the technology of the Shabad Guru.

Because the reflex points are stimulated by the movements of the tongue, you get the maximum benefit from the pattern of a Shabad by consciously repeating the sounds out loud. That is called Jappa – conscious, conscientious recitation. Rotating the tongue over the 84 reflex points in the pattern of the Shabad produces the maximum impact on the gross level of the neuro-endocrine system. As the Shabad gets established in the nervous system and your subconscious, every cell of your body will vibrate the pattern with you. That is called the state of Ajappa Jap – of repeating without repeating. In that ideal state the resource released by the Shabad Guru is always available to you regardless of the momentary focus of your attention on daily tasks. It is the result of great devotion, much practice and mastery, or grace. When that state is reached you still repeat the Shabad out loud, but the dimensions of joy and awareness that accompany the practice are without limit. You recite the Shabad in the beginning of the practice of the Shabad Guru in order to clear the mind, and attain an awareness. When you reach a stage of mastery, you still recite the Shabad out loud because you have become the Shabad and the Shabad has become you. There is a merger between the personal experience of you and the impersonal experience of Infinity beyond you and within you. The core technique to precisely vocalize the Shabad of the Shabad Guru is useful and true for the most novice beginner and for the most exalted master. The repetition of the Sutras of the Shabad Guru is a tool as timeless and unconditional as the Shabad Guru itself.

The ancient seers and the Gurus have left us maps and tools to guide us into the territory we want to explore. They also give us the clear warning not to confuse the maps for the actual territory. They implore us to realize that no amount of study replaces the knowledge which comes through experience.

The human body is analogous to a musical instrument. It is constructed with72 strings. Each string or “sur” acts like a meridian – it is a flow of the energy of life called prana. The inflow of cosmic energy into the body cascades through the crown of the head, the “tenth gate,” like a waterfall and collects in seven pools or special vortices. Those pools are called chakras or energy centers. The 72 strings are controlled by three central strings or channels. These are called the ida and pingala – the left and right channels to either side of the spine, and theshushmana – the central channel up the middle of the spine. The upper centers vibrate with the release of each independent thought. The thoughts of the mind are released at a rate as high as a thousand per blink of an eye. These vibrations or patterns of thought “pluck” those strings. The strings vibrate into 72,000 channels. Their vibration creates the shape and function of the physical body, the emotional body and the mental body. Just as you stroke a string on an instrument and it forms a shape in the air.

If you can vibrate a pattern in the central channel it will induce a synchronous pattern throughout all the rest of the strings. To vibrate a Shabad in the central channel you must become still, bring your full attention to the sound pattern and let go of your attachments by devotion or surrender. To vibrate perfectly it requires a combination ofShakti and Bhakti. Shakti is the power of precision and discipline in the repetition. It is the pure energy which enforces all implementation without human tiredness. Bhakti is the feeling of surrender and devotion; it is the devoted dedication which provides the energy to complete everything. It is form and flow, sun and moon, rhythm and tone in perfect blend. That opens the intuitive knowledge of the central channel – Gian.

The thousand thoughts released by the mind can distract you. They can pull you away from the Shabad. But the rhythmic Naad of the Shabad Guru engages and synchronizes the flow of thoughts. The pulse of the atoms of sound produce a pattern of energy that structures the space of the mind to link with the Shabad. This produces an active stillness, a shuniya, a zero-point in consciousness. In that stillness you are like an instrument perfectly played in an orchestra. Your instrument merges into the larger tune.

Another map for the mechanism and impact of the Shabad Guru traces the reflexes between tongue and brain. The body is perfectly designed to use the Naad or rhythm of the Shabad Guru. There is a connection between the movement of the tongue in the mouth and the chemistry and neuro-transmitters in the brain. One end of this connection is an array of 84 reflex points on the upper palate of the roof of the mouth. The palate has two parts: hard and soft. The hard palate is located directly behind the teeth; the soft palate is located on the roof of the mouth. 64 points (32 pairs) are located along a “U” on the hard palate near the base of each tooth. 20 more points are in a ‘U” on the roof of the mouth. The exact location varies in each person to conform to the unique shapes of the mouth.

The movement of each part of the tongue stimulates these meridian points. The points are like a keyboard input to a computer. The computer is located in the hypothalamus area of the brain. It receives the impulses from the repetition of the patterns of sound in the Shabad. This is translated into instructions that regulate chemical messengers that go to all vital areas of the brain and body. The hypothalamus lies just below the thalamus in the midline of the brain. It is connected by blood vessels to the pituitary gland – the master gland of the body. The hypothalamus is known to regulate vital functions like hunger, drinking, body temperature and sleep. It also triggers the regulation of moods, emotional behavior and sexuality.

The special patterns of the Shabad Guru stimulate the hypothalamus to change the chemistry of the brain. This adjusts the functions of the endocrine system and the metabolism to create a neutral balanced mind, and to strengthen the immune function. Many sophisticated states can be stabilized in the mind using the Shabad Guru. It can conquer depression, enhance intelligence and intuition, and open the power of compassion.

Another approach to understand the impact of the Shabad Guru is to follow the functional changes in brain metabolism and the neuro-endocrine system. We wondered if we could see some trace of such an effect using brain imaging technology. Many years ago, we set up a pilot study at the University of Arizona using a P.E.T. scan – Positron Emission Tomography. We used an isotope of glucose to see changes in metabolism in different areas of the brain. We took a baseline scan after a period of activity – walking and normal internal dialogue. A second scan was taken in the same subject after a period of walking while using a basic Shabad Pattern, i.e., 2 repetitions of thePanj Shabad followed by one repetition of the Guru Mantra Shabad: Sa Ta Na Ma, Sa Ta Na Ma, Wha Hay Gu Ru. The researchers expected little change with such a subtle variation in activity. The results showed a powerful shift in the function of the left hemisphere to the right frontal and parietal regions. The metabolic shift suggests a strong mood enhancement, countering any depression. The metabolic drop in some regions of the left hemisphere corresponds to a lessening of inner critical voices. The areas of the right frontal cortex suggest alertness and hypervigilence, which creates a readiness to respond to unusual stimuli and to creative thoughts. Some other areas seemed affected, like the anterior cingulated gyrus, but it will take further research to map the changes completely.

This was a small initial study to sample what we could notice using this instrumentation. What is important about this study is that it is the first study to show a significant brain shift from the use of the Shabad Guru. The brain can be shifted in specific patterns by the use of Jappa (meditative, conscious repetition) with the Shabad Guru. It opens the way to begin the exploration of the tongue, sound, shabad, neuro-chemical, brain connection.

These technological approaches and brain connections open the way to teaching a broad audience about the benefits and use of the Shabad Guru. For some, devotion is the natural approach. For others it is the immediate difference it makes in their lives. The explanations need to be practical and accessible, so the Shabad Guru can be known as a quantum technology anyone can use.

For a more extensive explanation of some basic links between the brain, its structures and the use of sound, see Appendix III of this paper. (Not yet on-line.)

Understanding the technological process of the Shabad Guru in this way invites its use to alleviate many modern-day maladies. In fact, we have investigated for over 25 years the application of this technology in many social programs to end addiction, and a range of psychological problems from anxiety, to depression, to sexual disturbances. In every area we created change, alleviated symptoms and changed lifestyles. Just as the Gurus created social change and provided food and education to change people’s lives, the Shabad Guru approached as a quantum technological process can be used to alleviate many personal and social ills.

Affirmations and positive statements are helpful and good to use. Mantras are effective and gradually create changes. But the Shabad Guru as captured in the Siri Guru Granth Sahib is unique. The patterns are a perfect weave of rhythm, sound, tone, focus and meaning. They act as informational DNA for the spirit. There is nothing as effective and universal as those patterns.