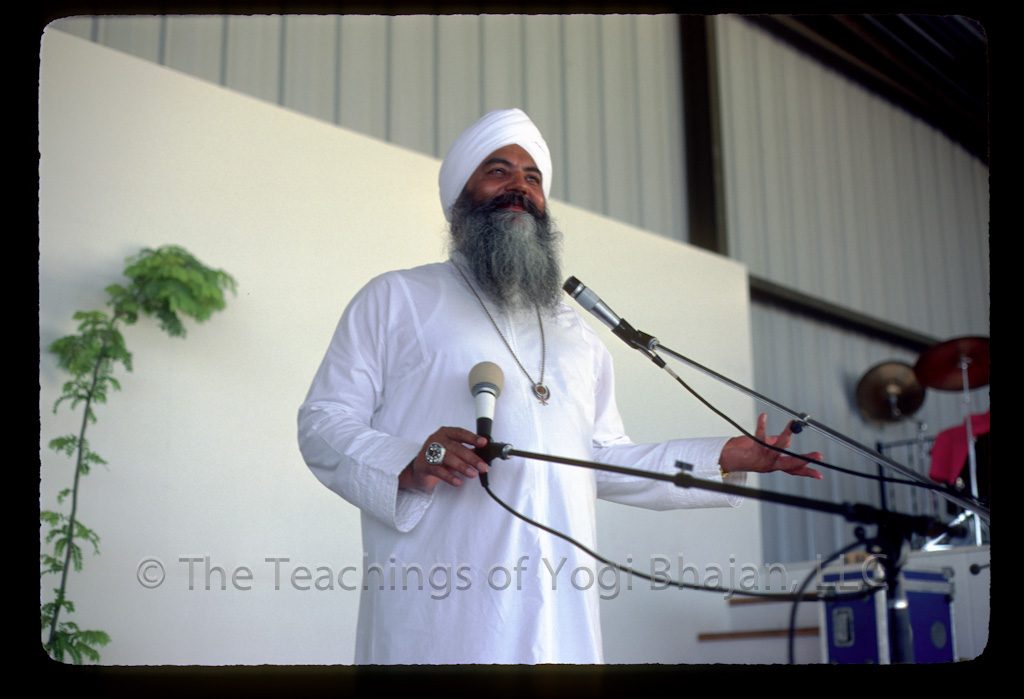 Excerpted from a lecture given on November 20, 1988 in Los Angeles, California, U.S.A. by the Siri Singh Sahib, Yogi Bhajan

Some will take more time, some will take less time, some will never make it, some will deny it, some will accept it, that’s a matter of fate and destiny but those who want to travel the distance to destiny must understand what Guru Gobind Singh stands for as a character and a caricature. If Mickey Mouse can have an empire, why not you? Are you not worth a Mickey Mouse? If Santa Claus can live in a subzero temperature in North Pole and can make the reindeers fly, and walk into everybody’s chimney in their privacy against human rights.

And throw the sacks of gifts through the chimney and they never get black, if all that is believable, what is wrong with you who are alive, radiant and existing in God’s image? Don’t hate people, love them. Give them what Guru Gobind Singh gave you, give them what Guru Nanak gave you. You know, have a relationship, love Guru Ram Das and love him good.

I tell you and I tell you very honestly, I have loved lot of people, I have tried to love lot of people, nothing happens right. Then betrayed and betrayed and betrayed, that’s all I have seen. To me A, A is just called A, B is betrayal, C they cast me to death, D they did, I should be dead, my alphabet is very bitter, more bitter than even you can spell it. I was betrayed by those who were supposed never to, I was betrayed by those where scriptures says:

Some people ask me where you got educated, where you learned, who was this, who was that, it’s a waste of time. I wrote in my own poem out of sheer mercy and love, Guru Ram Das adopted me. I did say in my own pen, neither I read nor read, God taught me everything and people after that poem do not believe they can read it, they can understand it, they don’t want to believe it. They still want to know where I got this. I didn’t get anywhere, I got when I had nothing. I reached a point of total being nothing.

I remember the day that I didn’t have a blanket to be warm, I believed that day I saw it when for seven days I had nothing to eat, I have a day when I walked in United States without, without shoes in a snow of Canada and I know when my own relative put meat in a vegetable dish so I cannot eat it next morning and I know when I came at night and I had to sleep outside in a subzero temperature they will not open the door of my house to me, and I know when I became a janitor to clean a whole factory, so that I can do my morning Sadhana and take bath because the house they told me three o’clock you get up, do bath, you disturb our sleep.

When I was thrown out of my clothes, my possessions and my everything, Guru Ram Das at that time stood by me. When my relatives looked at me and they started asking what you have brought, what you will leave? How much money you make? I met the swamis, the holy men, how many students and Ashram I have got. My dear folks, my beloved one, I have seen all, top to bottom and I tell you something, they are worth nothing. Neither they were, neither they are, nor they are going to be. One thing only worked for me, my siriya and savariya, jinn siriya, taney(tinney) savariya with Guru Ram Das. You can hang me for this and you can worship me for this but fact is a fact, that’s why people who say I love you.

And I am pretty phony about it because I have got a good brain, I remember what they love me for and people forget about that. I see aura and I understand love has a definitely color and aura and she is telling me she loves me, she doesn’t have that color, how can that be? Rose is a rose, you are not going to tell me bamboo stick and tell me this bamboo stick is a rose, I mean that, not I am that stupid.

People think I am more stupid than this, they think, they will give me a brick and tell me it is a flower. I tell them today I just accept it because Guru says,

They give me a break, they say it’s a flower.

But I pray, let God give him. I pray to my Guru at that moment, give him the power to give me a flower. I don’t pray to Guru Ram Das for everything, I say, Guru Ram Das make these flowers of thine, so their fragrance can be all over the world, that’s I do. To me you are the flower children God gave to me, aren’t you flower children.

Am I not the teacher of that Yug, that age, flower age? I know you forget. Greatest song we sang, flowers in the rain, the best song, you should always sing it, it’s peaceful, it is tranquil and teach it to your children, they will love it, that’s what we all are. We are flower in the rain, we waited to be to born, we are born now, now we have a job to do; take the fragrance all over the world, that’s what we are. Take this fragrance all over the world, take the Guru’s word everywhere, that is,

Watch the video version of this lecture excerpt