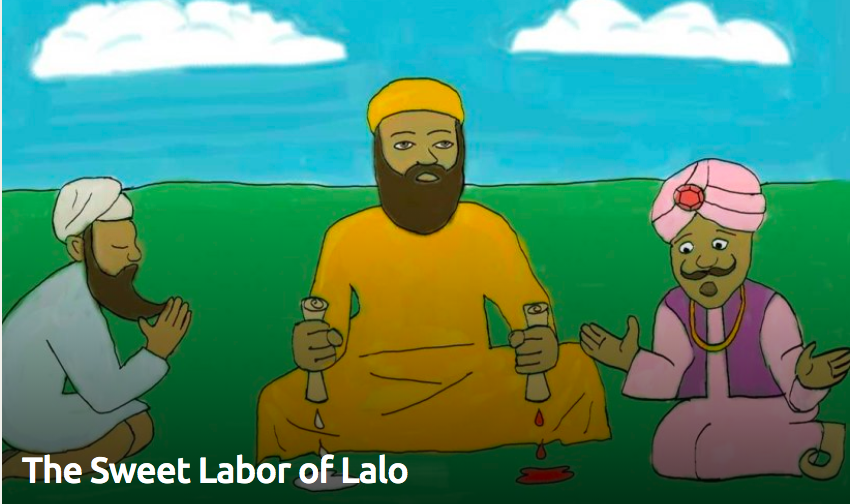 Guru Nanak used to travel all over India with his companions Bala and Mardana. Wherever they went, they made beautiful music to help people understand God and spread truth. This story takes place when they visited a remote village in Northern India.

As Guru Nanak and his companions walked toward this village, the people had heard the news and were excited that Baba Nanak was coming. Lalo, a simple and hardworking carpenter, ran out to meet him. He had heard of Baba Nanak and wanted to serve him. He was determined to invite the Guru to his home. He fell at Guru Nanak’s feet, saying, “O Baba Ji, my soul is honored to see your divine presence. Please come to my house so I can serve you.”

Guru Nanak agreed to Lalo’s pure request and went to the carpenter’s modest home. He and his companions ate the simple food offered. It was a typical meal in the region, with rice, daal, yogurt and chapatis. Even though it was simple food, it was made with love and Guru Nanak enjoyed eating it very much. Lalo and his wife were very hospitable and serviceful. When Guru Ji left they felt very blessed to have had such a saint in their house.

In the same village there was also a very rich man named Malik Bhago. He was the governor of the area. He didn’t treat people very nicely but every year he organized a huge festival to please God. His servants brought expensive, rare, and delicious food imported from all over India. It took them days to prepare the meal. When he heard Guru Nanak was in the area, Malik Bhago sent a messenger to Guru Nanak to ask him to join him in the feast at his home.

First, Guru Nanak said he could not come. But the messenger became afraid, “He might beat me if you don’t come back with me to the feast.” So Guru Ji went with him. When he got to Malik Bhago’s house, he didn’t eat anything. Instead, he just sat by himself meditating.

Malik Bhago was offended. He had found out that the Guru had eaten at Lalo’s house just the day before. He approached the Guru angrily, asking him, “Baba, why haven’t you eaten any of this food? You can eat at the house of a low caste carpenter but not my food?! It is the most exotic, expensive, rich food you can get, why won’t you eat it?”

Guru Nanak said, “I will show you why.” He then asked someone to go to Lalo’s house and bring some of the food back. When the food arrived, Guru Ji took a chapati from Lalo’s house in one of his hands. He took a chapati from Malik Bhago’s feast in the other hand. He began squeezing the chapatis and something amazing happened. Out of the Lalo’s, milk came out! Everyone was amazed! It was a miracle. But out of Malik Bhago’s chapati came blood. Everyone was shocked.

Malik Bhago arrogantly asked, “What does this prove?!” Guru Ji patiently replied, “Lalo works and earns honestly. His wife cooked the food with love and they served it with kindness and devotion.” Lalo’s food was like milk to a saint. Guru Nanak continued, “Your servants made the food with fear. They are afraid of what will happen if they do anything wrong and angry at you for treating them like you do.” So Malik Bhago’s food was like blood. “Only food that is made with love is truly good for the body.”

We know that we must eat food to nourish our bodies. But if it has bad energy in it, then why should we eat it? It’s not really good for our bodies. It’s always best to eat food made with good energy.

Malik Bhago learned a great lesson that day and became a student of Guru Nanak’s. He realized being mean to people all year and then making a feast just once, doesn’t make God happy. He became a fair man who treated others lovingly. And from then on he was devoted to his holy saint and teacher, Guru Nanak.