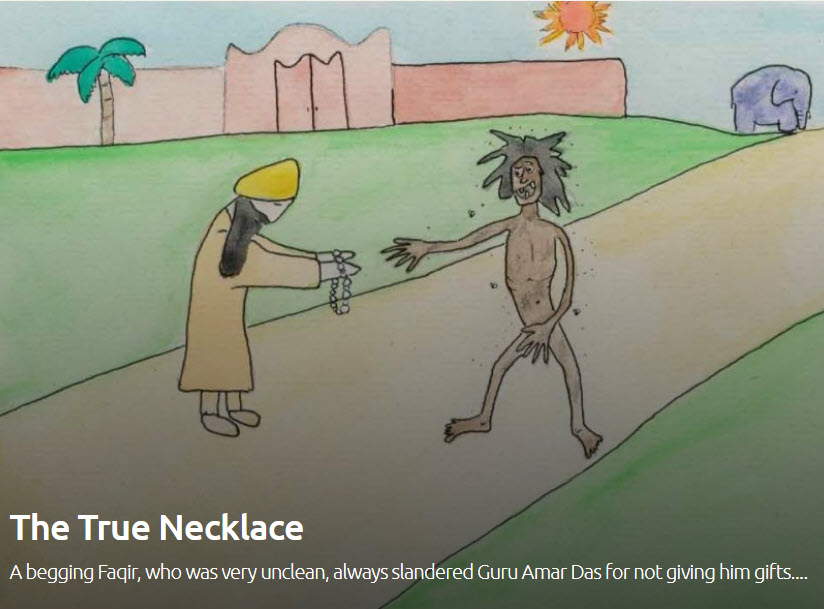 Listen to this story:

Once a rich man once came to see Guru Amar Das. He wanted to pay respect to this kind old saint, who was the third Guru of the Sikhs. He offered many expensive and valuable things. He brought out a most amazing necklace with pearls and valuable gems and said, “Guru ji will you take this humble offering of mine and bless me?”.”I am too old to wear a necklace. Put the necklace on the Sikh who is always holding me in his heart.” Said the Guru. The rich man said “Dear Guru ji, please put the necklace on some one of your choosing.” People were wondering who the Guru would put the necklace on. Guru Amar Das came over to Bhai Jetha ji. Bhai Jetha ji was very, very serviceful, he always remembered God and always did seva for the Guru. His devotion was incredible. The Guru loved this man so much he later gave him the name “Ram Das”, and his devotion was so great the he also became the Guru. At this time though, Jetha was young and not yet the Guru.

Guru Amar Das ji gave the necklace to Bhai Jetha. Jetha ji thanked the Guru and put the beautiful necklace on. Later Guru Amar Das ji was taking a walk by the river, as he did often. In this area there was a fake Faqir. He never cleaned himself so he was dirty and smelled bad, he was completely naked, he took drugs that clouded his mind, he was a very crude man but he claimed to be a holy man, a Faqir. When this man saw Guru Amar Das he rudely yelled out, “Oh, this Guru, I know you. You are very stingy, you don’t share with holy beggars like me. I bless people who give, but you never do.” This had happened before and Guru Amar Das was just very patient as he quietly walked on by. One time Bhai Jetha was with the Guru and they went on a walk together on the river bank. This naked man yelled out like he always did, “Oh, the Guru is so stingy, he never gives to anyone…” The Guru and the Sikhs ignored his rudeness like usual and calmly walked on. Jetha ji however, walked over to the dirty man and asked him “Why do you slander the Guru?” The man said, “Because he never gives me anything. Why don’t you give me that necklace you have on. It’s beautiful!”

Bhai Jetha simply took off the pearl necklace and said, “Here, take it.” They all kept walking for their long walk. On the way back the Faqir saw them again. Instead of slander, this time he praised the Guru. “God bless you, savior or the poor, may you be remembered forever.” Guru Amar Das said, “Someone must have given him something valuable, he has changed his act. Who gave him a gift?” Bhai Jetha spoke up, “I gave the necklace to him. You, my master, have given me the jewel of the name. I wear ‘Satinaam Waheguru’ around my neck at all times. This necklace I gave to him just looks nice and it sparkles in the sun. I gave it to him in honor of you.”

Guru Amar Das looked at him with love and said, “God bless you my son. Bless your children’s children.” The chanting of ‘Satinaam’ and ‘Waheguru’ is more valuable than any gold or jewels or fine clothes or any kind of riches.