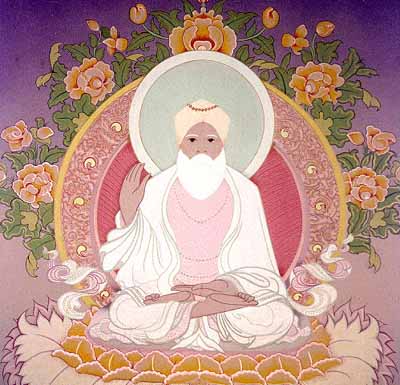 Guru Nanak, the first Sikh Guru, had an experience of divine enlightenment. He was immersed under the waters of the Kali Bien River for three days. When he was found his first utterance was, “there is no Hindu, there is no Muslim”. At first this statement may seem confusing, but it expresses an idea that became the foundation of all the values that would later be known as Sikh Dharma. Implied in this statement is the concept of “One God” – the idea that we do not need names such as Hindu or Muslim that separate one group from another because we are all come from the same divine source. That single idea generates others: the Oneness of all things in the universe connected by a single essence; the fellowship of all people worshiping the same divine creative force; Equality of all people, regardless of gender, color, caste, place of origin, and beliefs; the Tolerance of all people, of all spiritual paths.

Traveling on foot for 21 years, Guru Nanak spread his wisdom over a huge area throughout the Indian sub-continent and the Middle East. He encouraged the flow of ideas and culture, interacting with people of all faiths wherever he traveled. His message was one of acceptance and tolerance. Guru Nanak never passed up an opportunity to learn from someone or to share his insights. Rather than trying to convince people of other faiths to adopt his beliefs, Guru Nanak often encouraged them simply to follow their spiritual path with more devotion, dedication and discipline, going deeper into the underlying essence of those beliefs.

Throughout Sikh history the Gurus always taught to respect and even defend the rights of other faiths against oppression and tyranny. When the most sacred of Sikh temples was constructed, the Harimandir (Golden Temple), it was created with four doors. Each door was oriented toward one of the four cardinal directions, with the intention to welcome people of all faiths from any “quarter” of the Earth. Later, the ninth guru, Guru Teg Bahadur was requested to come to the aid of the Hindu priests of Kashmir who were being persecuted by the Mogal emperor. Taking a stand against religious intolerance, he was imprisoned, tortured and then martyred. Although Sikhs have fought many battles, they never fought in the pursuit of land or wealth – every battle was in self-defense or in the defense of religious freedom.

Perhaps Yogi Bhajan’s most well-known quote is “when you can’t see God in all, you can’t see God at all.” It reminds us of the “Oneness” of all things, the “Oneness” of all people. It reminds us of the virtue of being open-minded, accepting and tolerant to all things as expressions of the same infinite energy – to see the “other” as “you”. From the time of Guru Nanak’s first teaching, to the present time of racial and religious struggle, it is clear that all of humanity needs more acceptance and tolerance – in our interactions with each other externally; but also internally, with our own pursuit of personal self-acceptance and self-tolerance.

There is a parable from the East about an old sage who was asked by a student about how the old man had begun on the path of encouraging people to be in a continual state of acceptance and tolerance. The old sage said that as a young man he had been filled with a passion to reach out to everyone he could find to convince them to be kind and tolerant. But as he grew into his middle age, he thought he could have more success if he just concentrated on spreading this practice among his friends and family. And now that he was in his old age, he only hoped that he, himself could be more accepting and tolerant.

Each of us must struggle to find our own way through the inner obstacles that keep us from living in acceptance and tolerance. Guru Nanak recognized this and encouraged us to do this inner work with his words in the 38th Pauri of Japji, “Let self-control be the furnace and patience the goldsmith. Let understanding be the anvil and spiritual wisdom the tools”. Through our daily meditative practice we slowly bend and shape our consciousness to gain neutrality – the ability to be non-reactive to the people and situations we encounter in our lives. We gain the strength of character to put aside our petty fears and prejudices. We learn to accept the truth of each moment, as we encounter it in our life. We gain the vision to see the “Oneness” of all things with acceptance and tolerance. Although the values of tolerance and acceptance are not unique to Sikhs, we can all be inspired by these Sikh virtues to elevate the world through our personal excellence and consciousness.