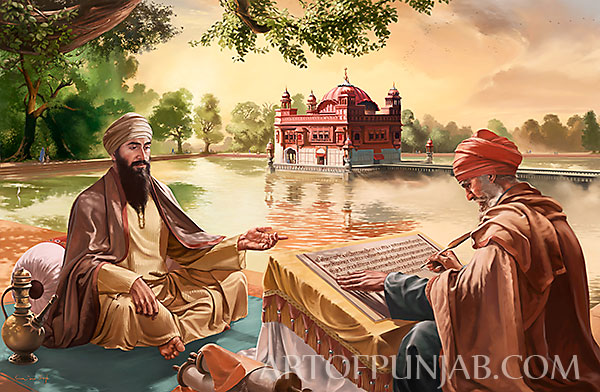 The following is an excerpt from the book Heroes, Saints and Yogis: Tales of Self Discovery and the Path of Sikh Dharma, compiled by Shakti Parwha Kaur Khalsa and Guruka Singh Khalsa.

Guru Ram Das had three sons. The child who was to become the Guru was the youngest. Born April 15, 1563, he was named Arjan Mal. Each of the boys had very different dispositions. The eldest, Prithi Chand, was clever in social and worldly affairs. He managed the Guru’s household and most efficiently administered the running of the common kitchen. He really wanted to become the next Guru, and he knew that it was service, not lineage, which had earned that position for Guru Angad and Guru Amar Das. He made a conspicuous show of serving his father, but his motives were easily seen by Guru Ram Das.

The second son, Mahadev, was a recluse and, contrary to the Guru’s teachings, he adopted the ways of an ascetic. He wasn’t interested in becoming the next Guru.

From his earliest childhood, Arjan Mal, the youngest of the three, was serenely tranquil and calmly in tune with the Infinite. One day when he was just a baby, Arjan crawled up on Guru Amar Das’ seat and sat there quite contentedly. The Third Guru smiled and said, “(He) will carry the Sikhs across in the ship of the Nam.”

The Birth of the Guru Granth Sahib

It preserved the original sacred Hymns composed by the first four Gurus and protected them from being distorted by impostors. It is an everlasting guiding light, a physical and spiritual touchstone.*

Along with verses composed by the first four Sikh Gurus plus his own, he also included the divinely inspired words of other enlightened men: Sheikh Farid, a Muslim saint; Bhagat Kabir, a Muslim weaver; Bhagat Ravi Das, a shoemaker from Uttar Pradesh; Dhanna, a farmer from Rajastan; Namdev, a calico printer from Maharashtra; Bhikhan, a Sufi saint; Jai Dev, a poet from Bengal; Trilochan, a Brahmin from Maharashtra; Sur Das, a blind poet; Pipa, a king from Uttar Pradesh; and several more, all belonging to different walks of life, sects, and both high and low castes.

Additional note by SatKirin Kaur Khalsa:  The criterion for all hymns to be included was: the words had to describe the oneness of God and Creation (that includes that the words have a rythmic Naad that imparts that experience which imparts the experience of the essence of God within).

Guru Arjan Dev himself was a gifted and prolific poet. More than half of the Siri Guru Granth Sahib is made up of his writings. 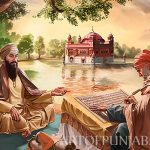 This beautiful image of Guru Arjan and Bhai Gurdas Ji is by Kanwar Singh.  Visit www.artofpunjab.com to view the story behind this painting and Kanwar Singh’s library of paintings.