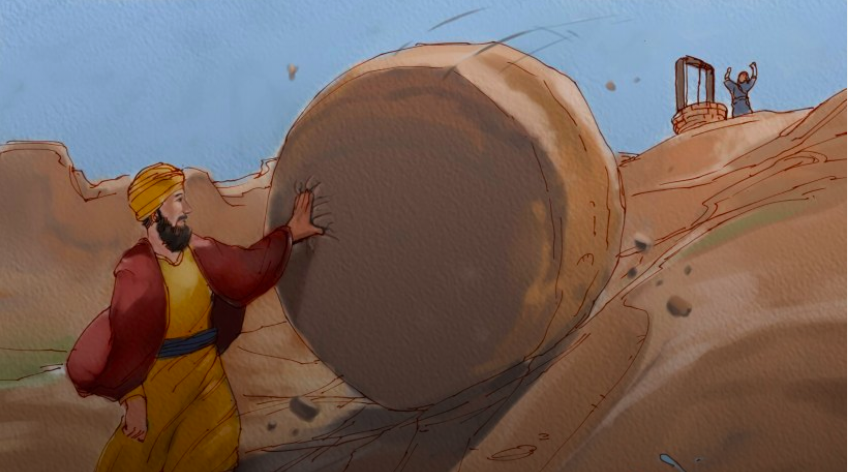 Guru Nanak Dev Ji used to travel on foot everywhere with his companions and musicians, Bala and Mardana. One day they were walking and Mardana felt very thirsty. It was very hot outside and they had been walking for a long time. Finally they reached a hill with a dwelling at the top. They were sure they would be able to get water there.

A man lived there and had a well that everyone in the nearby village used to get water for washing themselves, growing food, and drinking. But he was very greedy and charged money before anyone could use the well.

So Mardana came back down the hill and told the Guru what the man had said. Guru Ji told him to go again and ask the man for water in the Name of God. Mardana did exactly that and again the man refused. Mardana again came back and told Guru Nanak what had happened.

Guru Ji said, “We must give a person three chances to do what is right. Go again and ask him in the Name of God to share some water with us.” So Mardana respectfully asked the man for the third time, “Please sir, share some water. I ask you again in the Name of God. I’m sure if you share, God will bless you.” The man said, “I don’t care! If you don’t have money, go away. Stop bothering me.”

The man had now been given three chances and still Guru Nanak, Bala and Mardana were very thirsty and hot. So Guru Nanak sat down and said, “Don’t worry. God always takes care of us.” He found a small stick and dug it in the ground. And an amazing thing happened: a spring of pure, clear, refreshing water came up.

The three were so happy. They drank their fill of the delicious spring water and felt refreshed. Others from the village saw what had happened and joyfully joined them in using some of the fresh spring water.

The greedy man had been watching them from the top of the hill and saw everything. He looked into his own well and realized it was drying up. The water was going from his well to the spring at the bottom of the hill where all the people had gathered around Guru Nanak and his companions. The man became furious.

The man spotted a huge boulder nearby and had an idea to crush Guru Nanak. He mustered all his might, and with great effort he managed to roll the boulder over the hill, down toward Guru Nanak and the group near the spring. The boulder rolled down the hill and gained speed as it went.

People in the group were scared and quickly rushed out of the way. That is, everyone except Guru Nanak, who was now sitting peacefully in meditation.  The huge boulder was headed right for him and it looked like it would run him over and even kill him.

He realized that what he had done was terrible and ran down to ask forgiveness. He bowed to the Guru and begged to be taught how to live in a more spiritual way.

Everyone was awestruck with the power of God and so happy they now had fresh water they didn’t have to pay for. The boulder had been stopped in its tracks and the greedy man had changed his ways.

From then on he became a kind and generous man. He had realized whatever God made was meant to be shared, and dedicated his life to sharing with others and teaching them to share.