Jaap Sahib is Guru Gobind Singh’s Bani (sacred hymn) that uplifts the soul, gives the experience of infinity and expands the radiance of the human psyche. It is Gurbani, the Guru’s hymn, and recited in Naad, the sacred sound current.

“crippled mentally and physically and downgraded to the extent that if a Moghul soldier spat at you and if you didn’t catch the spit, you could be beheaded. Ten, twenty, a hundred thousand men were picked up and their blood was fed to the emperor’s hounds. That was the price of life.” (July 21, 2016)

Into this challenge of time and space, Guru Gobind Singh gave the technology of Bowing Jaap Sahib Kriya to awaken the warrior spirit. The Gurbani, recited in perfect Naad, combines with the technology of Kundalini Yoga to directly stimulate the infinite potential energy we call Kundalini. When the bani says Namo, Namastang, or Namastavang it is a command to bow. Bow to what? Bow to God.

The Bowing Jaap Sahib Kriya is simple and extremely effective: Sitting on your heels in rock pose, hands resting on your thighs, with each repetition of a different aspect of God, you bow. The repetitive movement of the lower spine, combined with the power of the Naad, stimulates the fourth vertebra, the seat of Kundalini energy. Heat builds at the navel and Kundalini travels through the spine to the higher centers in the head. This practice is said to give you the courage to face your enemies and strength to claim the victory.

The Siri Singh Sahib shared this technology as it was taught to him. 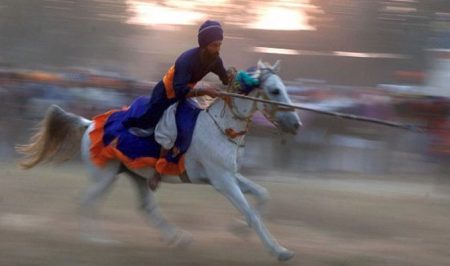 Guru Gobind Singh composed Jaap Sahib in 1686 at the age of nineteen at Paonta Sahib on the banks of the Yamuna River. In Jaap Sahib there are 199 stanzas. Each stanza is in four parts. Guru Gobind Singh named and explained God in over nine hundred ways.

In the words of the Siri Singh Sahib: “Jaap Sahib is the salutation to God in which Guru Gobind Singh recites every facet of God.”

Jaap Sahib is the first section of Guru Gobind Singh’s collected writings, the Holy Dasam Granth. It is one of the five Banis recited by practicing Sikhs each day. It is composed in five languages: classical Sanskrit, Arabic and Persian and the common spoken Punjabi and Hindustani.

Below is a tiny sample of the creative expression of Guru Gobind Singh’s love and devotion from this powerful bani:

The rhythm of Jaap Sahib is like that of a galloping horse, a driving drum beat instilling martial spirit into the heart. The cadence of the Jaap Sahib is used for marching, martial practice, and the Gatka sword dance of the pantra (footwork pattern).

“If you can practice this [kriya] meditatively, then whatever people say, you will always compute what people mean. It will take away unawareness, foolishness and nonsense. You have to understand one thing. The Sikhs of Guru Gobind Singh were in a position to run at the speed of a horse. What was the miracle that gave them such power? Jaap Sahib.”

SS Dr. Kirpal Singh Khalsa is an ordained Sikh Dharma Minister. He served as director of Guru Ram Das Ashram in Boulder, Colorado, from 1971 to 1991 and continues today as President of Sikh Dharma of Colorado. He received his PhD in sociology in 1986 from the University of Colorado and taught Kundalini Yoga as a fully-accredited course at universities in Colorado, Oregon, and New Mexico. From 1992 to 2003 he served as Academic Director for the Sikh Dharma Education International in India and was a founding member of Miri Piri Academy in Amritsar, India. He is an accredited Kundalini Yoga Teacher Trainer, a member of the International Khalsa Council and an active member of the the Espanola Sikh sangat.