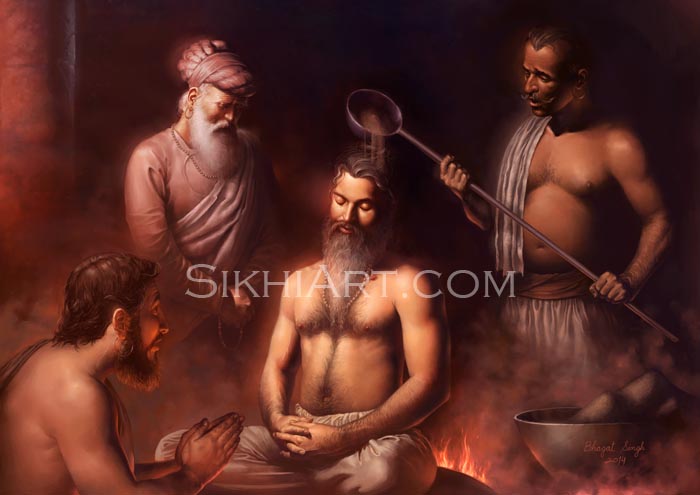 Guru Ram Das had three sons. The child who was to become the Guru was the youngest. Born April 15, 1563, he was named Arjan Mal. Each of the boys had very different dispositions. The eldest, Prithi Chand, was clever in social and worldly affairs. He managed the Guru’s household and most efficiently administered the running of the common kitchen. He really wanted to become the next Guru, and he knew that it was service, not lineage, which had earned that position for Guru Angad and Guru Amar Das. He made a conspicuous show of serving his father, but his motives were easily seen by Guru Ram Das.

The second son, Mahadev, was a recluse and, contrary to the Guru’s teachings, he adopted the ways of an ascetic. He wasn’t interested in becoming the next Guru.

From his earliest childhood, Arjan Mal, the youngest of the three, was serenely tranquil and calmly in tune with the Infinite. One day when he was just a baby, Arjan crawled up on Guru Amar Das’ seat and sat there quite contentedly. The Third Guru smiled and said, “(He) will carry the Sikhs across in the ship of the Nam.”

Emperor Akbar was already convinced of the spirituality of the Sikh Gurus. During one of his campaigns, he had come to Goindwal where he ate langar, sitting on the floor like everyone else before paying his respects to Guru Amar Das. A Muslim Pir, the Saint Mian Mir from Lahore, loved and served Guru Arjan Dev and the Sikhs.

Mian Mir was very revered by the Emperor Akbar. Consequently, when charges were leveled against Guru Arjan in Akbar’s Court by a few impostors (Prithi Chand and his son Meharban) and some jealous Hindu Priests (Brahmins), the charges were totally disregarded. The complainants were virtually thrown out of King Akbar’s court.

The House of Guru Nanak had gained enormous popularity under the guiding light of Guru Arjan Dev. Both Hindus and Muslims flocked to the Guru to pay homage.

The dismay of fanatic Orthodox Muslims at the growing number of Guru Arjan Dev’s followers was heightened by the malicious manipulations of Chandu Shah, a Hindu revenue official at the provincial court of the Emperor at Lahore. Chandu Shah had once offered his daughter in marriage to Guru Arjan Dev’s only son Hargobind, but the offer had been refused. “Hell hath no fury…”

But Akbar did not reign forever. Emperor Jehangir was of a different caliber. He wrote in his biography, “A Hindu named Arjan lived at Goindwal . . . simple-minded Hindus and ignorant and foolish Muslims have been persuaded to adopt his ways . . .  this business has been flourishing for three generations. For a long time it has been in my mind to put a stop to this affair and to bring him into the fold of Islam . . . ”

Jehangir summoned Guru Arjan Dev to Lahore. He wanted to have him executed for inciting rebellion. However, on the recommendation of Pir Mian Mir, he commuted the sentence to a fine of 200,000 rupees plus an order to erase a few verses from the Granth Sahib. Guru Arjan Dev would not do it. The Sikhs of Lahore offered to pay the fine, but the Guru refused to let them.

The Guru was imprisoned and brutally tortured. He was made to sit on a heated metal plate, and burning hot sand was poured on his naked body as he sat exposed to the scorching heat of the June sun.

Pir Mian Mir asked the Guru why, with his yogic powers, he did not stop the torture. The Guru told him to close his eyes and watch. Mian Mir saw the Guru sitting on the iron plate pouring the hot sand on himself and also stoking the fire beneath the hot plate. He immediately realized that everything was happening according to God’s will and this was the Guru’s destiny. The Guru said, “Thy will is sweet to me, O Lord. Nanak craves for the wealth of God’s name.”

The torturers placed Guru Arjan Dev’s blistering body in the cold water of the River Ravi. There, his soul was set free. Guru Arjan Dev was the embodiment of devotion, selfless service, and universal love.

In other words, he exemplified spiritual excellence. He contributed deeply to the welfare of the society in which he lived and he stood steadfast for the principles he believed in and for which he gave his life, experiencing the first martyrdom In Sikh history. Before he died, after serving 25 years as the Fifth Guru, Arjan Dev chose his son Hargobind, to follow in his footsteps and carry the light of Guru Nanak for all humanity.