Pritpal Singh hosted our fifth HomeKirtanChat Facebook Live Video program on May 15 with special guest Tarn Taran Singh, focused on the Mool Mantra and its relevance for these times. Includes live music, stories and discussion.

Tarn Taran means “One who swims and inspires others to swim.” Tarn Taran Singh’s spiritual and musical roots come out of the alternative youth culture of the late ‘60s. In 1972, he and his wife, Tarn Taran Kaur, joined a Kundalini Yoga ashram in Tucson, Arizona. Six months later they were on a plane to Amsterdam to join the young 3HO community in Europe. During his 25 years in Europe, Tarn Taran Singh became the 3HO European Regional Director, founded the Guru Ram Das Ashram in Hamburg, Germany; the European Yogi Tea Company; the 3HO European Yoga Festival; and the first European Kundalini Yoga Teacher Training program. In 2005 he moved to New Mexico to become the Executive Director of the KRI International Teacher Training Program. Since his retirement two years ago, he continues to travel and teach and play music around the globe. He has recorded eight CDs of mantras and original songs, collaborating with various musician friends, such as Snatam Kaur, Guru Dass Singh, Gurudass Kaur, Sada Sat Kaur, SaraAvtar and Kumari&Manvir.

The Mool Mantra Removes the Fate and Changes the Destiny to Complete Prosperity. Learn more here. 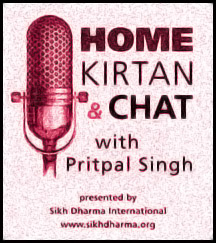 In these unprecedented times of isolation and quarantine around the world, connection with each other and global sangat feels more important than ever before. Sikh Dharma International is offering this new weekly program –  Home Kirtan & Chat with Pritpal Singh – to offer comfort, connection and upliftment during these times.

We will offer an interactive live video session every Friday at 3 p.m. (EST) on Facebook livestream, Pritpal Singh will bring on a different guest musician to play a shabad with special relevance for these times, and then to chat about it. There will also be time for audience interaction and Q&A!

You are invited to participate in this new and interactive live Shabad Guru program. We hope it will nourish your soul during these challenging times.