This year marks the 350th anniversary of the birth of our beloved Tenth Master, Guru Gobind Singh Ji. He was born in 1666 as Gobind Rai, and spent most of his childhood in the town of Patna (Bihar-India).

As a child, Guru Ji shared his love and touched the hearts of many. In everything he did, whether playful or serious, he was always teaching, always blessing. There are many accounts of his service and inspiration to others.

For instance, a Rani (queen) in Patna had no children of her own, and wished for a child similar to Gobind Rai. Guru Ji understood her longing and said: “There can only be one like me – accept me as your own son.” The Rani was overwhelmed with joy and began to treat Gobind Rai as her own child. She served him with great devotion and Guru Ji would address her as “Ma” (mother).

In 1699, Guru Ji called for a gathering in Anandpur Sahib. He stood on a stage in front of thousands of people and asked for five to sacrifice their heads. Many were confused and some ran away thinking that the Guru had gone mad. But one by one, five came forward and answered his call.

He decorated them with Bana and they were transformed, radiant. He purified and liberated them with the celestial Naam. Mata Sahib Kaur, in pouring the sugar crystals, helped to create the first Amrit, which Guru Ji then bestowed on them, creating the “five beloved ones”—the Khalsa, devoted to purity in thought and action.

Gobind Rai, out of his boundless humility and compassion, became the disciple by kneeling before the five and asking them to baptize him with the Amrit. At that moment he became Guru Gobind Singh. 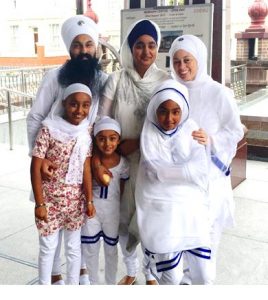 Guru Gobind Singh Ji taught the concept of Bana (the projection of a Sikh through the way s/he dresses), Bani (scriptures), Seva (selfless service to all mankind) and Simran (meditating on the Divine Naam). The Bana helps sustain a raised state of consciousness and includes the 5 Ks:

Applying the technology of Bana gives us a beautiful and powerful grace, which defines our values and identity, and the experience of “Chardi Kala”. The Siri Singh Sahib taught us that Sikh Dharma is a living and practical way of life, and it is not ritualistic in any way. 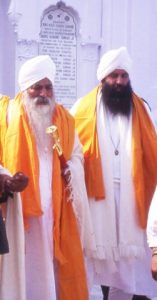 In the 1990’s during his visits to the United Kingdom, the Siri Singh Sahib would travel from one Gurdwara to another, teaching about Sikh Dharma. Following a Baisakhi procession, he spoke about the importance of wearing the outer Bana, but also building our inner spiritual grace through meditation.

He gave the example of the five beloved ones being dressed in orange Bana for specific processions. He said that the outer “orange color” is significant, but that the inner self should also reflect that color and its meaning.

As Ministers, it is vital that we have a balance in our appearance and practice. A strong daily Sadhana and the reading of Banis help to control and elevate our mind and actions. This practice gives us a higher consciousness and connects us with the Divine. Selfless service reminds us to be humble, treating everyone as unique but equal.

In a lecture on February 19, 1979, the Siri Singh Sahib spoke about Bana: “Wearing the Bana gives us discipline. When there will be living in you a very distinct, disciplined life, Guru Gobind Singh promises that he will inject in you the entire cosmic power of radiance and spirit.”

We are truly blessed to be a part of this legacy, so that we may aspire to live as elevated human beings and serve all those around us. 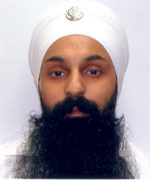 SS Kulwant Singh Khalsa was born into an Indian Sikh family and took Amrit at the age of 10. He was ordained as a Sikh Dharma Minister in 2011. Kulwant Singh had the opportunity to be in the presence of Siri Singh Sahib Ji during his tours to the UK and at Solstice in the 1990s. These experiences have inspired and guided his life ever since. He has served in professional childcare and education for almost 20 years and manages a Sikh school for young children. He works extensively in the Sikh community, serving the Guru and Sangat through Kirtan and seva. Kulwant Singh is a loving husband to Jagdip Kaur Khalsa and grateful father of three girls and one boy. He lives to serve as a son of Guru Nanak through Guru Gobind Singh and is grateful for being able to live as a Sikh in this lifetime..