March 11, 2011 changed many of our lives in Japan. When northern Japan was struck with the mega earthquake, the tsunami, and the explosion of the nuclear plant in Fukushima, many families lost literally EVERYTHING: including— and of foremost importance—their loved ones. The Japanese National Police confirmed 15,891 dead, 6,152 injured, and 2,584 missing until this day.

In 2011, the tour bus companies started volunteer trips to the northern villages and towns, making it widely accessible for people to join the recovery work from other regions, including overseas (thank you). Prior to the earthquake, many of us had never volunteered to serve the families and devastated towns, let alone held a shovel, axe, or saw to break down the houses, ranches, and greenhouses. 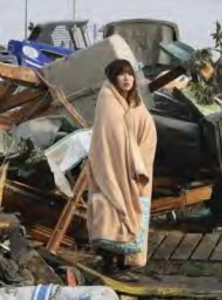 Many of us joined the volunteer trips simply because we wanted to help. What we witnessed was a pure grace and hope in the cold and dark chaos. In response to our efforts, people who had lost family members, homes, and jobs supported us in return. The towns they grew up and lived in were wiped out by the tsunami. Yet, in spite of their despair, the people were ready to serve one another. It is in the midst of crisis, when we are stripped of our attachments, that we realize we are the instruments of God’s peace. It is in our human instinct to give a helping hand when we see someone that needs help.

Through serving others we are all serving God in each other. In April 2012, Minami-Soma, a city next to the Fukushima nuclear plant, permitted entry for the recovery work. Much of the fieldwork in Miyagi region had been completed and the tour bus companies stopped offering volunteer trips. Over the course of a year, a group of us had become very close, as many of us went every weekend to help out. We decided to form a private volunteer group.

We began the trip to Fukushima in July 2012. The first time I went, I was shocked and speechless. It felt as if time had completely stopped on March 11, 2011. Nothing had changed. Huge numbers of cars and large ships stood in the middle of the rice fields. Some houses remained torn apart from the earthquake. The fields were covered with overgrown grass. There were no children; there was no one working in the rice fields; stores were filled with broken glass. The town was deserted. It remained this way for at least another year.

Minami-Soma, unlike the towns in Miyagi, faces issues that are not only visible to the eye. The people are living with emotional trauma of knowing that they can’t go back even though they want to live in the town where they grew up. This beautiful town of 100 cherry trees that blossomed every spring has been devastated. Now, wild animals roam where humans once lived. Currently, a man who has never missed a weekend leads these volunteer trips. He and a few more retired men have been steadily going to Minami-Soma twice a month, even though many others including myself go less and less. In their selfless service, they exemplify Guru Harkrishan, who sacrificed himself in his healing of the people suffering from smallpox. It is my honor to introduce the men and women who are devoted to help heal our people and our land. It is said that it will take 40 years for the northern part of Japan to heal from the earthquake and tsunami, so our journey of seva continues. Sat Nam. Harinderpal Kaur studied with SS Mahan Rishi Singh and SS Nirbhe Kaur Khalsa in Yardley, PA in 2008-2009. Shortly after finishing up the KRI Level 1 teacher training, she went back to her native Japan. She currently teaches Kundalini Yoga in Ibaraki and Tokyo regions. She and other Kundalini Yoga teachers in Japan are working to offer Level 1 teacher training and develop bigger Kundalini Yoga communities in different areas of Japan.