Over the past several weeks, I’ve been reflecting on the Subtle Body in relation to my actions as a Sikh Dharma Minister. I first pondered on how I actively minister, since I rarely perform ministerial duties such as weddings and other ceremonies. I believe that we minister all the time—in our work, play, family life, and in the way we move around in the world.

In my experience, the action of ministering in those circumstances is rarely overt. Most of the time, ministering involves being as present as possible in the moment. The sensitive, intuitive, sophisticated Subtle Body gives us the capacity to serve in this way.

I had an experience recently that clearly illustrated this for me. Earlier this week, I went to pick up my husband at the train station south of Santa Fe. The train was an hour late, so I was waiting around with others who were either taking the train as it continued south or, like me, were waiting for a friend or family member. 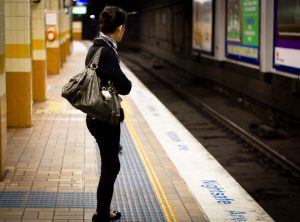 A young woman named Crystal and I sat down on the curb by the bricks leading up to the train tracks and started to chat about life. She was waiting for her mother-in-law. Crystal is in her early twenties, the mother of two girls. She was distinctively dressed in a Day of the Dead skull sweatshirt, a short black skirt, high-heeled motorcycle boots, black fingernail polish, and heart-shaped sunglasses. She was well put together and full of sassy style with a distinctive tattoo on her left calf muscle.

We spoke about life—when she chose to get married, her father’s drinking problem and how she navigates that with her children, and all the various entanglements, joys and sorrows of a young woman’s life. I started sharing my own story and while I’m doing so, I began to become aware that repeating the travails of my life isn’t doing anyone any good.

So I switched to just being present with her. I consciously experimented with the Subtle Body. I listened calmly. I invited in the Siri Singh Sahib and Guru Ram Das to be present with us in our conversation. I asked Crystal questions and she gave me so many great answers, showing me photos of her children, and talking about the challenges surrounding adopting her eldest child.

There’s nothing tragic in Crystal’s story. She wasn’t asking for my help. It’s just life. But in this experience I have a true awareness that ministering is very much about relaxing, getting out of my story, and simply being present. 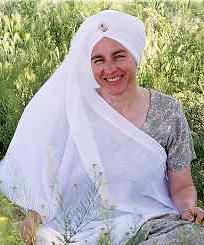 SS Dev Suroop Kaur is an ordained Minister of Sikh Dharma, an accomplished musician and recording artist, and Professional Level Trainer in the KRI Aquarian Trainer Academy. She studied directly with the Siri Singh Sahib (Yogi Bhajan) for most of her adult life, and gratefully shares what she has learned. She trains students and teachers of Kundalini Yoga in the science of Naad Yoga (sacred sound current), conscious communication, and how to access the beauty and power of their personal voice. She lives with her husband in Espanola, New Mexico, is certified as a Registered Yoga Teacher through Yoga Alliance and holds a Masters of Business Administration from the Claremont Graduate University.