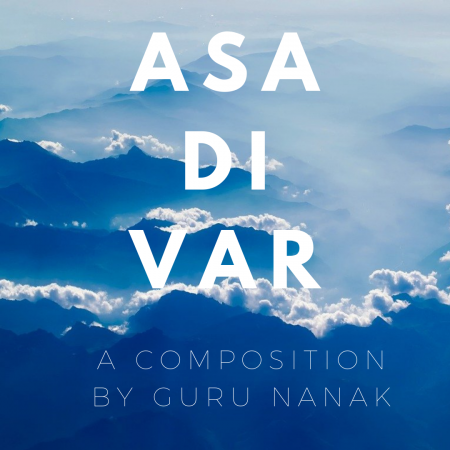 Asa di Var is a collection of 24 paurees or stanzas written by Guru Nanak Dev ji (Sri Guru Granth Sahib, page 462-475). The founder of Sikhism, Guru Nanak wrote the first nine together on one occasion, and later wrote 15 more stanzas on a different occasion. These two parts were then compiled together by the 5th Sikh Guru, Guru Arjan Dev ji in 1604 AD.

When Guru Arjan Dev ji was assimilating the Holy Granth, he added a few Sloks of Guru Nanak and in some cases Guru Angad Dev ji, the second Guru of the Sikhs. These Sloks are tied together in a way that they relate to the same theme as highlighted in the pauree. In its present form, Asa di Var contains a few more shabads recited by Guru Ram Das, the fourth Sikh Guru.

The Asa di Var kirtan is recited in the early morning hours in a very melodious way and style, as mentioned by Guru Arjan Dev Ji, called “Tunde Asraje Ki Dhuni” after the name of the contemporary brave and pious king Asraj. One of the hands of the king was amputated, so he was called Tunda, meaning crippled. The deeds and the ode of this king was sung by the bards in that typical fashion, which was extremely popular at that time, and melodious, and was therefore adopted to performing Asa di Var.

The Message of Asa di Var

Asa di Var does not tell a story, its theme is “how to become a spiritual person”- a devta, “a spiritual being.” In it, Guru Nanak also warns us against [religious] rituals. . . The most important thing is how to build up one’s character, and how to remove the obstacles that lay in the path of a disciple, the most important of which is the ego, selfishness or conceit.

Even holy persons, who are outwardly very good and kind, often suffer from religious pride. Sometimes so-called religious people, commit heinous crimes through self-righteousness and bigotry. It should be remembered that ego, in its pure essence, is self-awareness or identity, which when regulated is essential, for it is the basis of one’s character or moral nature.

When regulated by right motivation and active service, it is positive and beneficial. But if uncontrolled through self-pride of position or riches, it becomes selfish and mean.

The effects of the ego are particularly contemptible and disastrous when disguised by the apparent holiness or tradition, which exploits ordinary people’s ignorance and credulity. The practice of humility and love are the most effective qualities for keeping people away from sin, far better than all recitations and rituals of religion.

Initially, it is the fear of God’s wrath or displeasure which inspires the seeker to offer worship and prayer. Over the years this fear should become gradually replaced by love and self surrender, so that he loses his Impatience with those who are imperfect. He is in sympathy with them, for they are like strayed sheep. Only by self-discipline and serving other people, can one become worthy of divine grace. Associate with holy persons and learn from them, the secrets of spiritual wisdom.