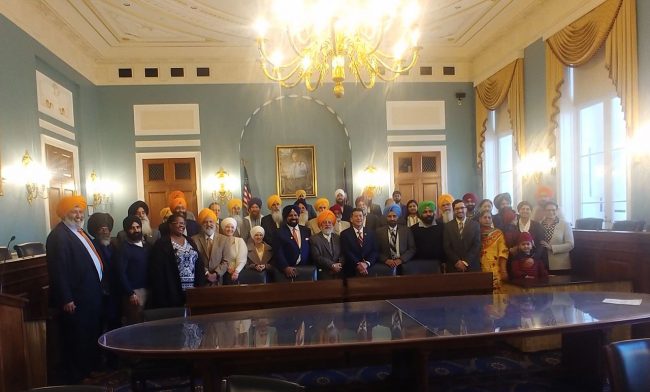 Founded in 2013 by Congresswoman Judy Chu (CA-27) and Congressman David Valadao (CA-21), the American Sikh Congressional Caucus is a bipartisan group of approximately 50 Congressional Representatives who have volunteered to serve on it. In 2014 the Caucus added Representatives John Garamendi (D-CA) and Pat Meehan (R-PA) as Co-Chairs.

The Caucus focuses on addressing the interests of the American Sikh community. They address topics including: military discrimination preventing American Sikhs from enlisting due to restrictive appearance regulations that ban turbans; violence against American Sikhs that has increased in the wake of the September 11 terrorist attacks in 2001; bullying being experienced by a disproportionate number of Sikh boys; racial profiling due to well-intentioned but misguided law enforcement policies, and employment discrimination.

Representative John Garamendi (D-CA), co-chair of the American Sikh Congressional Caucus, addressed the importance of tolerance in his remarks, especially for turban-wearing Sikhs in the United States. He said he is interested in continuing to partner with the Sikh community to address issues of concern.

Congressman Jim Costa (CA-16) acknowledged the importance of Baisakhi to the Sikh community and said he looked forward to celebrating Baisakhi in Livingston, CA this year. He said that he shares with Sikhs the commitment to equality and to promoting peace throughout the world. He said that Sikhs and immigrants are vitally important to the fabric of American communities, and that he has observed the generosity with which the Sikh community gives back to communities they are part of. He said that he places high importance on ensuring immigrants have opportunities in this country.

He said it is unacceptable that extremism based on hate takes many forms in today’s society, and that sadly Sikhs are often victims of hate crimes, including in his district. He said it is important that we remember that as Americans we are all in this together – “we the people,” is written into the Constitution and is a founding principle of this nation. Our goal should always be to “form a more perfect union” as our Constitution calls on us to do. Congressman Costa stated that in these times it is our collective responsibility to strongly speak out against hate crimes and atrocities directed against all groups and remind ourselves we’re all vulnerable to attack. He said Americans are strongest when we stand together.

Congresswoman Sheila Jackson Lee (TX-18) said that she associates values including justice, freedom and dignity for all with Sikhism. She said she is grateful for the American Sikh Congressional Caucus, which has continued to grow in recent years. Congresswoman Lee stated that religious freedom is one of the founding tenets of this nation, and that the U.S. cannot abandon this value but rather must continue to shine the light of freedom of worship around the world. She said she is committed to speaking out and standing with the Sikh community against atrocities.

Congressman TJ Cox (CA-21) expressed gratitude to the Sikh community in his district, and said that they played a major role in his election victory. He acknowledged the significant contribution of Sikhs to the agriculture industry in California, and said he is currently working on environmental legislation for clean air and clean water that will be for the benefit of all.

Finally, an award was presented to the Chardi Kala Sports Club, honoring their service to the Sikh community in Virginia, Maryland and Washington D.C. Chardi Kala Sports Club is a non-profit organization that utilizes fitness and sports in an effort to bring Sikh youth closer to their faith. Since their founding, they have held events such as turban tying competitions, powerlifting meets, blood drives, and kabaddi tournaments.