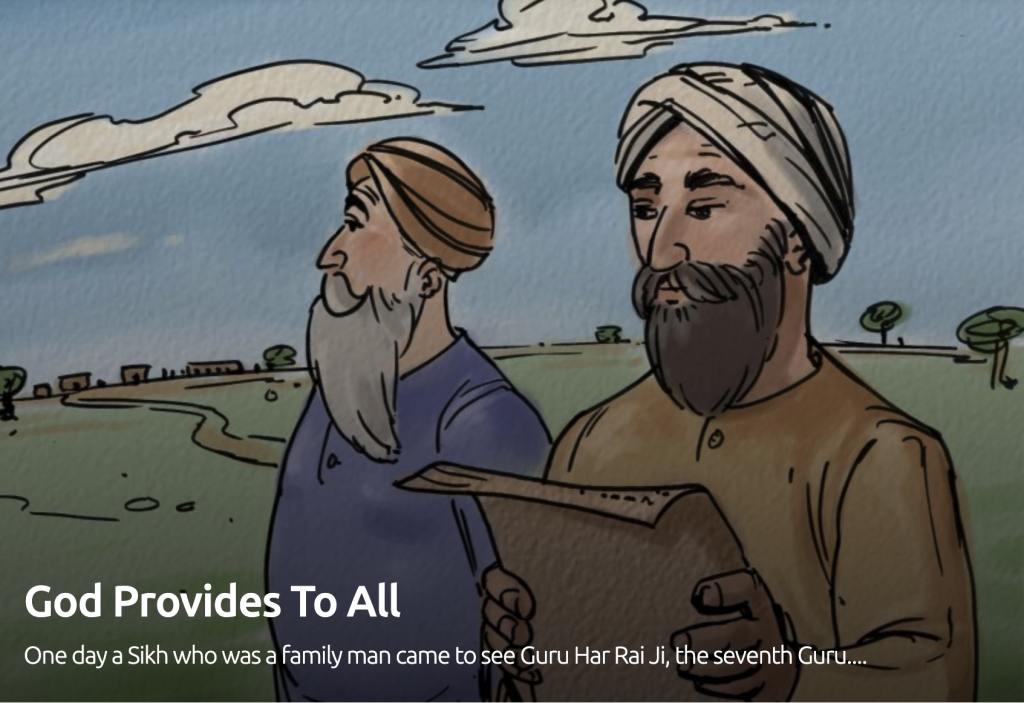 Listen to this story, courtesy of Sikhnet:

One day a Sikh who was a family man came to see Guru Har Rai Ji, the seventh Guru. This man worked hard to take care of his family but when he came to see the Guru, he was very troubled. He told the Guru that for many years he had wanted to leave everything and come stay in the Guru’s service. He said, ” I want only to serve you and earn salvation in the next world”. Then he told the Guru how he had a son who would have taken over the family responsibilities but, sadly, the boy had died. “All my hopes are shattered, what can I do?!” he asked the Guru.

Guru Ji asked him how many people he had in his family. “O True King, I have two younger sons and a daughter, and their mother, my beloved wife. I am the fifth member of the family. As far as money, whatever I earn is needed to feed us all,” replied the Sikh. Surprisingly, Guru Ji told him that if he wished to serve then he should do it. “But Guru Ji,” the Sikh asked respectfully, “how will they survive without me? Maybe you can give me faith that they will be taken care of.” But the Guru did not answer and instead told him to go on an errand. The instructions from Guru Ji were, “Take this letter to a Sikh of mine. Then make sure he has read the whole letter before you come back.”

So, the man went as quickly as he could. “Guru Ji will surely give me the answer and a lesson when I get back!” he thought. When he gave the Sikh the letter, he blurted out excitedly, “I have a message from Guru Sahib for you. Please read it quickly. Once you finish the whole thing, I can go back to the Guru and get my lesson!” So, the Sikh read the letter, and here is what it said: “Dear Beloved, capture the man who has brought you this letter and make sure he does not leave your sight for the next six months. Treat him kindly and with respect. After six months you may then free him.”

The Sikh who received the letter was obedient and knew he would follow Guru’s order. He asked the man to come to another room and then he locked the door. Then he said through the door, “O brother, I am truly sorry, but I can’t let you leave for six months. That is what the letter from the Guru said.” The other man pleaded, “Please sir, I have four people to look after, and they need me. They can eat only if I earn and provide food. Without me they will starve. Please, let me go.” But the Sikh couldn’t and wouldn’t listen. He followed the order, and even managed to convince the family man to trust the Guru and follow it too. So, the family man stayed there and spent his time meditating on the Guru’s lotus feet.

Meanwhile the universe was in the process of taking care of the man’s family. The first night he was gone they went without dinner. But the neighbors found out that the father was missing and decided to help out. To start with, each neighbor family brought one tray of flour each. Since there were fifty houses in the neighborhood, fifty trays of flour were collected in the space of 2 hours! That gave the family enough to make chapatis for a really long time. Next, the people living in the entire area helped them find jobs. The two sons became assistants to skilled workers, and they started earning some money. And another lady from the neighborhood gave their mother and little sister embroidery lessons. Once they learned that, they were able to do sewing jobs. With all this help and support from the community and their jobs the family didn’t have any more problems buying their food.

Six whole months went by, and the father was free to go. He immediately rushed home to see his family. He had been really worried, thinking that without food they might not even be alive. When he got home his heart almost burst out of his chest. They looked so great and healthy! The wife explained: “When you were gone the neighbors all pitched in to give us food. Then they trained us which helped us get good jobs. With all of us earning now, we are very successful. We have more than we ever had before. There was never anything for you to worry about.”

Now he understood the Guru’s play. This was his lesson in faith. He knew his family were fine without him. God would take care of them, and he was free to serve the Guru. He went to the Guru and gave himself in gratitude and service. He felt such happiness and bliss serving him. He allowed himself to serve his heaven instead of just his earthly responsibility and doing this his earthly life was covered. Instead of staying a slave to a lifestyle of work, he realized that when he served the Guru God still provided. And his family not only survived, they thrived!

God Provides to All from SikhNet