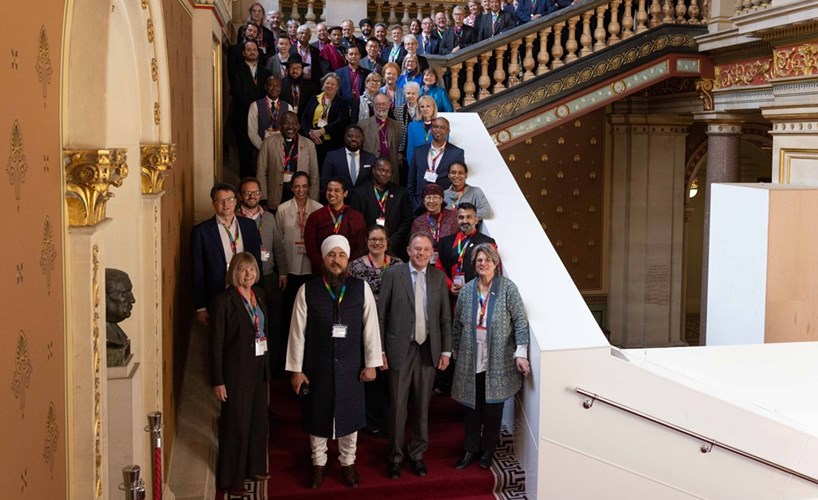 Members of the Global Interfaith Commission on LGBT+ Lives and conference delegates, in the Foreign, Commonwealth, and Development Office, on March 22, 2022.

This article was originally published in Church Times. It was written by Ed Thornton.

Six “safeguarding principles” have been published by the Global Interfaith Commission on LGBT+ Lives, designed to protect people who are rejected by their religious communities because of their sexuality or gender identity.

The principles were published on Tuesday evening, at the end of a two-day conference in the Foreign, Commonwealth and Development Office, hosted by the commission, which was launched in late 2020 (News, 18 December 2020).

The conference was attended by more than 150 religious leaders, academics, and lay leaders “from a range of faith backgrounds and 30 countries”, a statement said. These included the Primate of Canada, Dr Linda Nicholls; a former President of Ireland, Mary McAleese; and the Chief Rabbi of Poland, Michael Schudrich.

The principles, based on six safeguarding principles set out in the 2014 UK Care Act, are:

“Empowerment: We believe all individuals are made in the image of God, whom many call the Divine, and should be free to live a life of dignity, consistent with their sexuality and gender identity within their faith communities without fear or judgement.

“Prevention: We believe that we have a duty of care towards all LGBT+ people and so we commit ourselves to listen to the experiences of our LGBT+ members in order to identify and eradicate any harmful practice that inhibits the flourishing of us all.

“Proportionality: We recognize that for too long the needs of our LGBT+ members have often been ignored and side-lined, and so we commit to ensuring that LGBT+ people are always given fair voice.

“Protection: We recognize that many LGBT+ people face significant discrimination, rejection, and hatred, and so we commit to work to protect all LGBT+ people from harm, wherever it occurs in both religious and secular contexts.

“Partnership: We recognize that for far too long those of us who are LGBT+ have been excluded from decision that impact our lives and so we commit to always work in partnership so that together we can prevent, detect and report spiritual abuse.

“Accountability: We believe that no one is above the law and that there must always be transparency in all areas of safeguarding and so commit to work with our LGBT+ members to regularly monitor progress.”

During the conference, delegates discussed the findings of research reports into the practice of conversion therapy in Hungary and the Caribbean. The two reports, the statement said, “provide hard evidence of the harm inflicted on LGBT+ people, particularly LGBT+ children and young people, in cultures that are hostile to them”.

There was evidence, too, it said, of “significantly higher levels of suicide attempts, suicidal thoughts and self-harm” among those who have undergone conversion therapy than among LGBT+ people in those countries who have not. Conversion therapy, furthermore, is “often encouraged and practiced by their parents, healthcare professionals and religious leaders”.

The former Bishop of Liverpool, the Right Reverend Paul Bayes, who is co-chair of the commission, said on March 22, 2022: “For too long, many innocent people have been left totally undefended, with no one to turn to for help. We are now uniting to champion their cause and ensure that this abuse, which has gone on for far too long, stops.”

The commission’s director, Jayne Ozanne, contended that the principles, once adopted, would “transform the lives of thousands of LGBT+ people from Africa to Australia and from Asia to Argyll.”