There are brilliant teachers of philosophy, and there are knowledgeable professors of Sikh theology, but there are very few teachers of Sikh Dharma. Sikhism, by its very nature, is difficult to teach. Sikh Dharma is a way of life, not a dogmatic religion, and is rooted in a personal relationship between the Sikh and his Guru that is continually evolving and growing. As a teacher you can guide people in the process of delving into that relationship, but you can’t explore it for them. It is a path that each Sikh walks alone.

When Guru Gobind Singh ji left this earth, he vested the leadership of the Sikh nation in the Siri Guru Granth Sahib, and the Guru Khalsa Panth – a perfect union of divine wisdom, and inspired action. He left us the Rahit Maryada, the rules and traditions which define the Sikh way of life. However, he did not write these “do’s and don’ts” himself. Rather, he let the heroic aspects his life be the living document of how to be a Sikh. Many times since the late 17th century the rahit has been written by saintly and inspired souls. But you’ll find that in all cases, these documents are dated to the time and circumstances of the period in which they were written. An aspect of Sikh Dharma is certainly defined by the Rahit Maryada, but Sikh Dharma is also a consciousness, the Sukhsam Rahit, that is transmitted through living example or through the stories of the saints and heroes of Sikh history.

Guru Gobind Singh told his Sikhs to remember their history, to tell the stories of the Sikh Gurus, and to keep this alive in their communities. The stories of the lives of the Gurus are heroic and timeless – always applicable and never outdated. The ten Sikh Gurus were not gods incarnated on the earth; these were men with Godly natures. They were human, and they dealt with the pain and challenges that all human beings face. Their lives were filled with challenges, sacrifices, victory and exaltation. By remembering the history of the Sikhs, we learn how to be a Sikh and by telling these stories, we teach this consciousness to others. 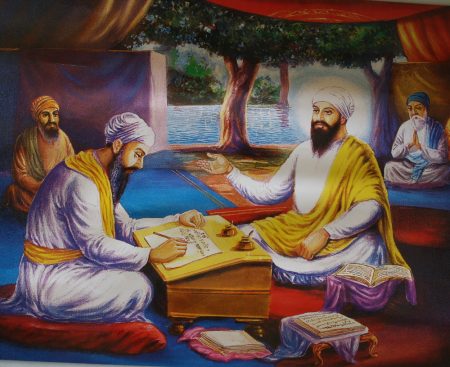 Learning Sikh history is in itself a journey and a challenge. The first writer of Sikh history was the great Bhai Gurdas ji. Bhai Gurdas Ji was born in 1551 in Goindwal, and was a devoted Sikh of the third Sikh Guru, Guru Amar Das ji from a very early age. He studied Sanskrit, Brijbhasha, Persian and Gurmukhi, and grew to become a brilliant teacher of Sikhism. Bhai Gurdas served as the personal scribe of Guru Arjan Dev Ji when he compiled the bani of the Adi Granth. It was Bhai Gurdas Ji who diligently wrote while Guru Arjan Dev ji dictated the verses that were later to become the Siri Guru Granth Sahib. Bhai Gurdas Ji wrote his own bani on the Sikh way of life and the spiritual nature of the human existence. In his work, Varan Bhai Gurdas, he tells us briefly about the first six Gurus, the only first-hand written account that exists.

After the death of Guru Gobind Singh, the Sikhs faced over one hundred years of dire persecution. To live openly as a Sikh was to invite certain death. The Mughal Empire was fading in India, but their intolerance of Sikh Dharma had never been more brutal. During this time, women maintained the farms while the men lived in the woods and jungles, the saddle of their horses being their only true home. Because of the dangerous environment they lived in, very little written text has survived from this period describing the history of the Sikhs. By the time life became less tenuous and more stable for the Sikhs, several generations had lived and died in the jungles and the opportunity to write first-hand accounts was gone.

However, the history of the Sikhs survived this time through the stories that were passed from father to son and mother to daughter. Faithfully learned and religiously recited, the glorious history of the Sikh Gurus, the saints and martyrs, were told around smoky campfires and warm hearths. Inspiring stories of Sikh heroes sustained the hearts of the Sikh nation during their time of trial and oppression.

Throughout the chaotic years of the 20th century and the independence of India from Great Britain, the preservation of Sikh history retreated from home and hearth to the University. While important scholarly work continued at Khalsa College in Amritsar and Punjabi University in Patiala, the aural tradition of the Sikhs disappeared from the family unit except among the most devout. The pressure of the family to be prosperous in the marketplace stripped the time for storytelling and within a few generations the preservation of history from parent to child began to dissolve. For many Sikhs, the rich and awe-inspiring history of their forefathers became a buried treasure that was now unknown and inaccessible. And true to the words of Guru Gobind Singh, as we forgot our history, it became more difficult to live as Sikhs in the modern world

Today the stories of Sikh history are emerging again, revived by the power of their own experience. The Sikh youth, both in the East and the West, are hungry for answers to their questions and are shocked and amazed when they find these answers come in the form of Sikh history. Bloody war and heart-squeezing beauty; treacherous betrayal and undying love; stories that are fantastic in their magnitude and astounding in their depth, make up the panorama of the history that is ours. Thanks to recent works of translation, bani such as Varan Bhai Gurdas, and the Dasam Granth of Guru Gobind Singh are now available for the English-speaking student to read and study, making transparent that which was once mysterious.

As each one of us starts the process of discovering our magnificent history, it is important to remember that these stories were meant not only to be read, but to be told. It is through the telling, that the spirit and energy of the Guru flows through the teller. This “rus”, or nectar, ignites the heart of the listener and brings the seeker to a new level of awareness. The telling of Sikh history is not reserved for the experts or the saints, it is the privilege of all Sikhs, and the duty of every Khalsa mother and father.

Shanti Kaur is one of the teachers at our Japji for the Aquarian Age Course.

Shanti Kaur Khalsa is a wife, mother, and business consultant who brings Khalsa values to every aspect of life. She is an engaging Sikh teacher and her involvement with Sikh youth has led to mentoring young people around the world. Shanti spent more than twenty years studying with Siri Singh Sahib Bhai Sahib Harbhajan Singh Khalsa Yogiji who inspired her on the path of Sikhism. She is an active kirtania, and has traveled widely giving inspirational kirtan and lecture programs. She is a published historian, and regularly contributes articles on both current events and Sikh history. Today, Shanti serves as the Executive Director for the Dharmic Public Affairs Office.