This content was originally published by the Sikh Research Institute.

When the Pandit asks Guru Nanak Sahib why he did not participate in the Arti ritual inside the temple, the Guru utters the Sabad (Arti), which refers to the natural Arti that is continuously taking place in nature.

Guru Nanak Sahib redefines the ritualistic Arti, urging us to imagine a different Arti. The Arti which takes down specific systems, power structures, and hierarchies, thereby equalizing creation to its original self. This Arti of the Guru is revolutionary, for it eliminates fear. This is the Arti of IkOankar, the Fear-Eliminator.

May the fragrance of this Arti enter our hearts and mind and make us fear-free. 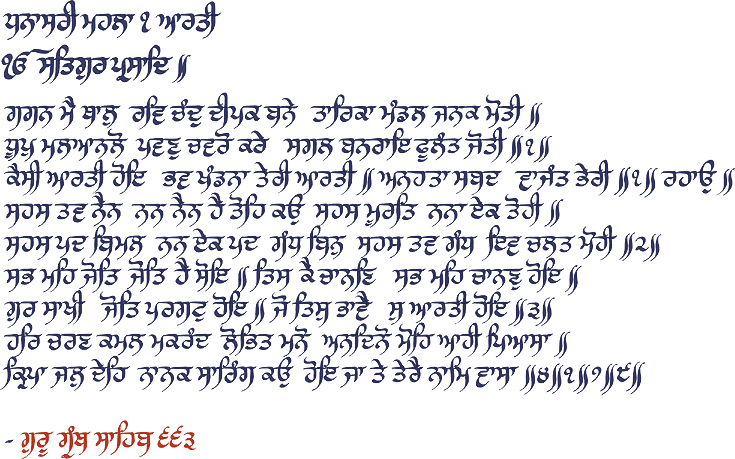 Guru Nanak Sahib sets this composition in the context of a common practice known to South Asians due to popular culture and tradition — the “physical” ritual performance of the Arti. In Hindu practice, Arti involves worshipping an idol, deity, or revered personality by rotating lamps in a circular motion. These lamps are lit and rotated four times up and down in a circular motion in front of the feet, twice in front of the navel, once in front of the face, and seven times in front of the whole body. Guru Nanak Sahib takes this element of the dominant practice and expands it by juxtaposing the physical Arti with nature’s Arti, shifting the practice from its individualistic context, and expanding it into the Arti of the cosmos, to include everything and everyone.

In this Arti of the cosmos, the sky becomes the salver, the moon and sun become the lamps, and the stars become the shining pearls. The fragrance of sandalwood from the Malaya mountains becomes the incense, and the wind the fanning fly-whisk. Everything in nature, all of the things around us, are continually performing this Arti all on their own, offering flowers to IkOankar (One Universal Integrative Force, 1Force), referred to by Guru Nanak Sahib here as the Fear-Eliminator. In this Arti, the unstruck sound echoes and resonates like a clarinet.

Guru Nanak Sahib then asks, what kind of Arti ought to be there? Again, Guru Nanak Sahib is expanding the traditional form Arti takes in everyday practice. Guru Nanak Sahib is asking us to imagine a new kind of Arti. One that has never been done, or rather is always being done — one that, instead of being used as a tool to maintain specific systems and power structures and hierarchies, is used to break them down, and equalize the creation to its original self. This Arti of IkOankar, the Fear-Eliminator, is revolutionary because it is accessible to all, happening all the time, whether we take part in it or not. This Arti is for the One who eliminates fear rather than for those people in power who instill fear, who rule by fear.

Guru Nanak Sahib is asking, How do I do Your Arti, Fear-Eliminator? How do I take part in this Arti of the cosmos? In this Arti, there is so much music being played. Unlike the music that is being constructed in performances and concerts for people in power, this music plays on its own. This music is unstruck, not produced to perform, but that does not mean one cannot hear it. This is the music we can listen to after we quieten the noise all around us, and listen closely to the sounds being played in nature all on their own.

Guru Nanak Sahib then moves from discussing the things present before us, the things we can see and hear and feel with our senses and asks if we can perceive things with those same senses that are not visible. Again, there is an expansion of shared understandings, this time of the dichotomy between a conception of a Divine that is Nirgun (transcendent), versus a Divine that is Sargun (immanent). Guru Nanak Sahib plays with these dichotomies by addressing the Fear-Eliminator and saying, You have thousands of eyes, and yet You have none. You have thousands of forms, and yet You have none. You have thousands of feet, and yet You have none. You have thousands of noses, and yet You have none. The senses again come into play here, but this expansion addresses the larger religious world that either believes the Divine has forms and features and tangible physical existences, or that the Divine has none of these things and cannot be embodied. This dissolving of the line between immanence and transcendence is an important acknowledgment of this Fear-Eliminator’s play and a challenging idea of a faraway and inaccessible Divine. We can get to IkOankar through the senses — it is not that the senses can perceive everything, or the whole picture, but they can perceive some of it. The perception of this play can captivate us and bring us closer to the One for whom the cosmos continuously perform Arti.

Guru Nanak Sahib then speaks about the Light. All of the grandness of the cosmos and the use of these senses to tune into the Arti that is happening all around us is a testament to the fact that everyone has this Light within them. Guru Nanak Sahib reveals, That One whose Light is in all is the Embodiment of Light. It is by the radiance of IkOankar that there is Light in all. Sometimes, we may not see it. This is where we struggle. This is where both the religious and non-religious world struggle — there is so much othering. We may not see that this Light is in everything because it is hidden. But the way that it becomes evident, the way we bear witness to it, is when the Wisdom enters our lives. When the Wisdom brings out recognition of Light everywhere, that is when we can take part in the Arti of the cosmos.

These senses, when we use them to Identify with IkOankar, entice our intellect and charm our minds. Once we are charmed, we are filled with love and continuously longing to Identify with the Beloved, IkOankar. Guru Nanak Sahib refers to himself here as a pied cuckoo, a bird that has a lot of patience, waiting for its thirst to be quenched. This pied cuckoo refers to the lover who loves with patience, and it is when we become loving like the pied cuckoo that we are able to Identify with IkOankar and taste the nectar of Grace. This comes after we witness the Light, and we embody love. This is when we feel the grace.

Even outside of the South Asian context, one could say that humans perform their own sorts of ‘artis’ in different ways. We do this through politician or celebrity ‘worship.’ We do this by participating in things that maintain systems and power structures and hierarchies rather than attempting to challenge those things with a radical sense of equity and equality. These are the things that are rooted in a kind of individualism that further separates people from one another, puts distance between creation and Creator, and does not honor IkOankar. Then, the ‘root-oriented’ don’t just preach oneness where all beings share attributes of the One; the radical Wisdom then allows us to practice 1Ness, where all beings are the attributes of the One.

The lover-being emerges when individualism is transcended, fear is eliminated, the Light is seen, patience is practiced, and grace is felt! That is when the Fear-Eliminator is seen as the 1-Light!

In Rag Dhanasari, Sabad revealed by Guru Nanak Sahib under the title ‘Arti.’
The creative and all-pervasive Force (IkOankar) is One, that is, unparalleled. IkOankar can only be realized through the grace of Wisdom (Guru).
In this creation of the Creator, the sky is like the salver, adorned by the sun and moon as the lamps. Constellations of stars are like the shining pearls.
Fragrance of the sandalwood plants from the Malaya mountain is like incense, and it is as if the wind is fanning the fly-whisk. It is as if the entire vegetation, flourishing by virtue of the all-pervading Light of IkOankar, is offering flowers to IkOankar, the embodiment of Light.1.

O IkOankar, the Liberator! What an amazing Arti is being performed in nature on its own. In this Arti, the unstruck sound (anhad-sabad) is echoing continuously like a kettledrum.1. rahāu.

The One whose Light is pervading all the creatures of the world, that IkOankar is the Embodiment of Light.
By virtue of the Conscious Force of IkOankar, everyone is illuminated with consciousness.
Through the Wisdom (Guru), this pervading light becomes evident.
Whatever pleases IkOankar, that alone is transpiring in nature; that alone is the Arti of IkOankar.3.

1 creative and all-pervasive Supreme Being; through the grace of the true Guru.
Sky is like the salver, sun (and) moon are (like) the lamps; constellations of stars are like the pearls.
Fire of the sandalwoods of Malaya mountain is (like) the incense, (as if) wind is fanning fly-whisk; (as if) entire vegetation is offering flowers to the Embodiment of Light.1.

O Liberator from birth and death (IkOankar)! What an (amazing) Arti is happening; in Your Arti the unstruck sound is resounding (like) a kettledrum.1. rahāu.

O Hari! (My) mind is tempted (to taste) the nectar of Your lotus-feet. Every day, I have a thirst (for it).
Bestow the grace of water on Nanak, the pied cuckoo, by virtue of which (I) may (always) have a dwelling in Your Nam.4.1.7.9.

In the stanza with ‘rahau’ (refrain/pause), the use of the adjective ‘bhav khanḍanā’ (the Destroyer of the pain of beings’ life and death) depicts the distinctiveness of IkOankar. Therefore, this is a eulogy.

The second stanza describes two forms of IkOankar; one is the all-pervading manifest (sargun) form, and the other is the transcendent (nirgun) state.

In the manifest form, all the eyes, forms, feet, and noses of the thousands of beings are those of IkOankar alone. Whereas, in the transcendent state, IkOankar has no forms or physical features like eyes, feet, or noses. Thus, at the surface level, the inherent contradictions presented here seem to give the impression of an oxymoron. But at a deeper level, only IkOankar is prevailing in both the manifest and transcendent states.

There are a total of twelve lines in this Sabad (a verse or a short composition in Guru Granth Sahib). There are thirty-six meters in the first and the eleventh lines, and thirty-seven meters in the second, fifth, sixth, and twelfth lines. Such a verse form is called karkha or karakha chand in Indian poetics. There are twenty-nine meters in the third line and seventeen meters in the fourth line. The seventh, eighth, ninth, and tenth lines have meters between fifteen and nineteen. These can be categorized under a four-line verse (caupade).

The Sikh Research Institute recently launched an ambitious, historic, and never-before-seen initiative – the Guru Granth Sahib Project. The project involves a team of over 35 scholars and translators based in different locations all around the world working on annotation, translation, interpretation, commentary and historical research.

Visit the Sikh Research Institute to Learn More about this Exciting Project!