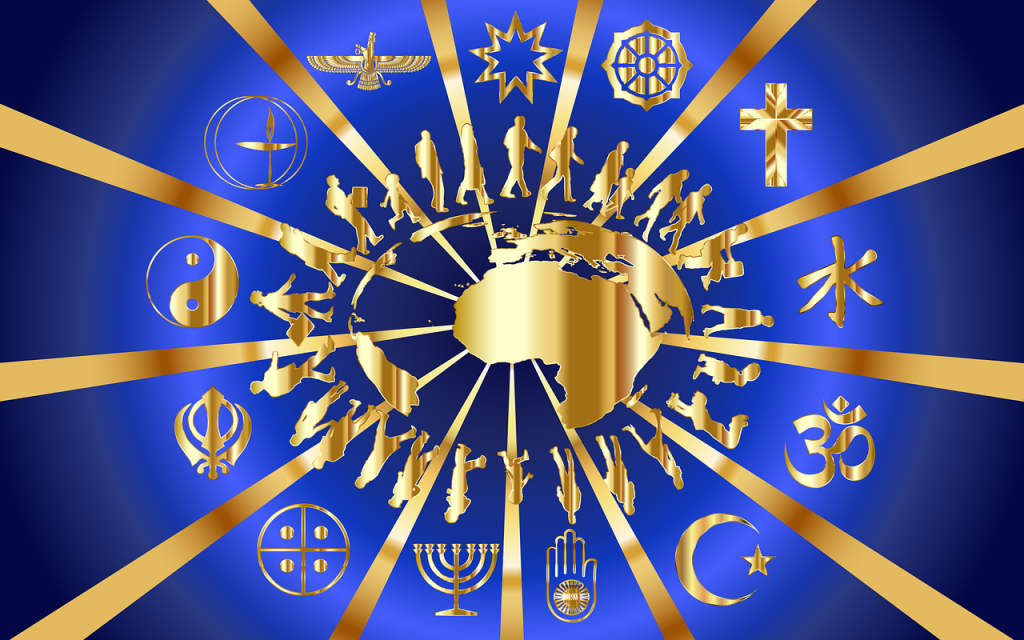 A Sikh by definition must respect and accept all other world religions. Further, the Sikh must protect, guard and allow the free practice of the customs and rituals of other religions.

“One who recognizes that all spiritual paths lead to the One shall be emancipated.”

Guru Teg Bahadur, the ninth Sikh Guru, sacrificed his own life to protect the well-being of the Kashmiri Pandits, who were Hindus. In 1675, the Sikh’s beloved Guru was publicly beheaded in Delhi by the Mughal Emperor Aurangzeb for not changing his faith.

“Hinduism may not be my faith, and I may not believe in various Hindu traditions like idol worship, caste system, pilgrimages and other rituals, but I will fight for the right of all Hindus and all other peoples of the world to live with honor and to practice their faith according to their own beliefs.”

This set a precedent and Sikhs are bound by the Guru’s teaching to respect and protect the rights of all other faiths.

Bhai Mardana, who was a Muslim, and Bhai Bala, who was a Hindu, were two associates and companions of Guru Nanak Dev ji. Both of them observed their own faiths and continued to practice their respective religions while accompanying Guru Nanak on his travels spanning several decades.

In the case of Baba Mardana, on his death, the Guru performed the last rites as per the Muslim custom. This demonstrates the complete acceptance and respect by the Sikh Gurus for other religions.

The Four Doors of the Golden Temple

Sri Harmandir Sahib Ji, also known as Sri Darbar Sahib Ji, and informally referred to as the Golden Temple, is a Gurdwara located in the city of Amritsar, Punjab, India. It is one of the most revered spiritual sites of Sikhism.

The construction of Harmandir Sahib was intended to build a place of worship for men and women from all walks of life and all religions to worship God equally. The four entrances (representing the four directions) to get into the Harmandir Sahib also symbolize the openness of Sikhs towards all people and religions.

All who visit Sri Harmandir Sahib may partake jointly in the free community kitchen and meal (Langar) regardless of any distinctions, a tradition that is a hallmark of all Sikh Gurudwaras.

Bhai Kanhaiya ji was born in Sodhara near Wazirabad in Sialkot District (now in Pakistan) of a wealthy family and left home when still young. He traveled with yogis and other religious groups. When he met Guru Teg Bahadur Ji, he became a Sikh and settled down. Bhai Kanhaiya set up a religious center at Kavha village, Attock District (now in Pakistan) from where he spread the Guru’s message.

His special mission was the performance of selfless service (Seva) to humanity with no distinction of nationality, caste or creed. In 1705 CE when on a visit to Anandpur he found the area entrenched in battle with a combination of hill troops of Hindu Rajas and the Mughal imperial army soldiers littering the countryside with wounded and dying people. After the frequent skirmishes, Bhai Kanhaiya would roam around serving water to the wounded and the dying –  both friend and foe.

Guru ji said, “These brave Sikhs are saying that you go and feed water to the enemy and they recover to fight them again – is this true?”

Bhai Kanhaiya Ji replied “Yes, my Guru, what they said is true. But Maharaj, I saw no Mughal or Sikh in the battlefield. I only saw human beings and they all have the same God’s Spirit – Guruji have you not taught us to treat all God’s people as the same?”

The Guru was very pleased with the reply. He blessed him and told the Sikhs that Bhai Kanhaiya had understood his teachings correctly. Guru also gave him medical balm and said, “From now also put this on the wounds of all who need it.”

Bhai Kanhaiya died in 1718 CE after retiring to Sodhara. His example is a tribute to a universal message of compassion and kindness to all.