Early in my career as a knife / kirpan, sword, and jewelry designer and maker, the Siri Singh Sahib Yogi Bhajan wrote me a letter urging me to ‘make things that uplift and inspire people’. Since then, my team and I have consciously dedicated consistent efforts toward conceiving, creating and offering affordable artwork that uplifts and inspires.

After nearly four decades of working as a custom knife and sword maker, I’ve developed Kirpans that are often referred to as the ‘World’s Finest’. They are excellently made, beautiful, useable and sharp kirpans – because we believe you should be able to protect yourself and/or the weak and innocent if ever you are confronted with that necessity.

Our beloved Yogiji put me up to some pretty grand sword projects over 30 years. In the gallery at KhalsaKirpans.com, you will find images of several of the swords that he requested – manifesting design details he wanted. Following those complex projects, we received orders from other successful Sikh business people to create special swords for their family members. Over decades and through a worldwide economic recession, admirers of those beautifully engraved and gem-encrusted swords have requested more affordable versions.  Almost five years ago, we began developing a more affordable full-sized sword with the same high quality, excellent design and functionality of our more ornate swords.  Recent events have proven that this new model called “Song of the Khalsa” has the inspirational value that is now one of our production standards. 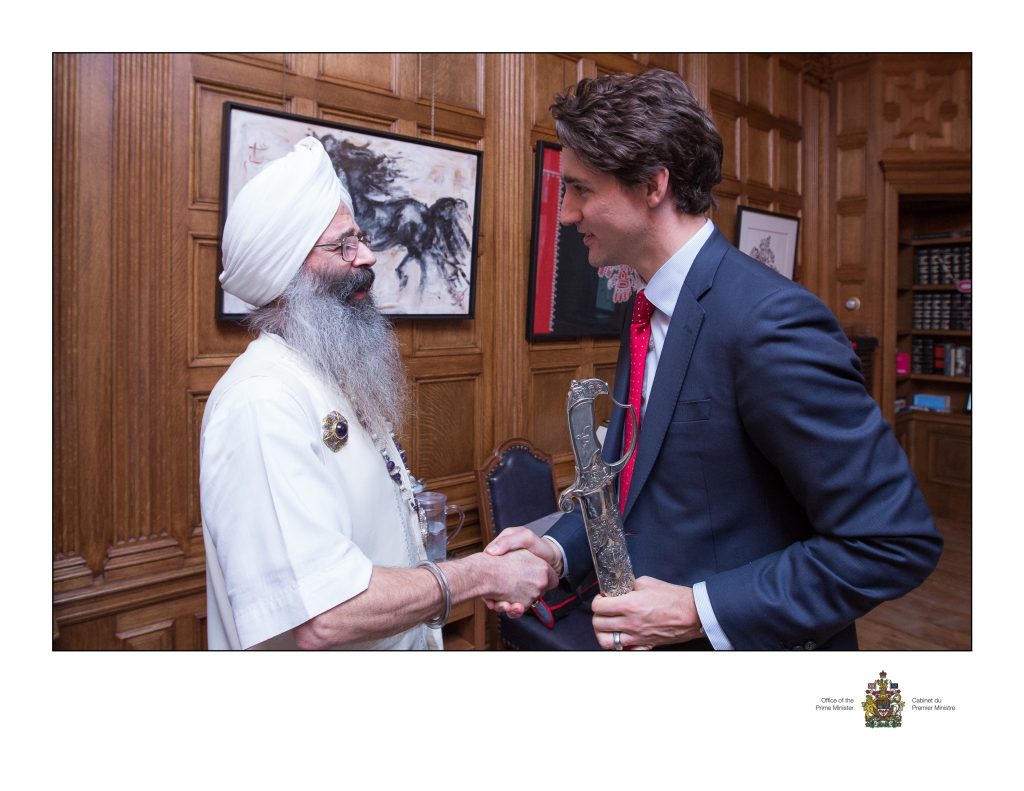 Randeep Sarai, a kind and generous friend whom I met at Khalsa Men’s Camp in BC, Canada, is now a member of Canada’s Parliament. Randeep Singh contacted me earlier this year about the possibility of presenting the Canadian Prime Minister, Justin Trudeau, with one of our new swords – to honor his efforts to support the diversity of Canadian culture, including Canada’s large Sikh population. Seventeen Sikh members of Parliament and the Prime Minister’s cabinet commissioned the sword. The formal presentation, which I was invited to attend, took place April 11, 2016 during a Gurdwara program held on Parliament Hill in Ottawa, Canada. We had personalized and ‘inspirationally blade etched’ one of our early prototypes of these swords, for the Canadian Prime Minister.

It was my pleasure and blessing to stay with long-time friends Siri Bandhu Kaur and Harimander Singh Khalsa, who own a lovely, vegetarian B & B within walking distance of the Canadian Parliament.  They also accompanied me to the Gurdwara and sword presentation. We were delighted to see and hear that another Khalsa Council member, Dr. Harjot Kaur Khalsa of Canada, had been asked to offer kirtan and the Ardas. 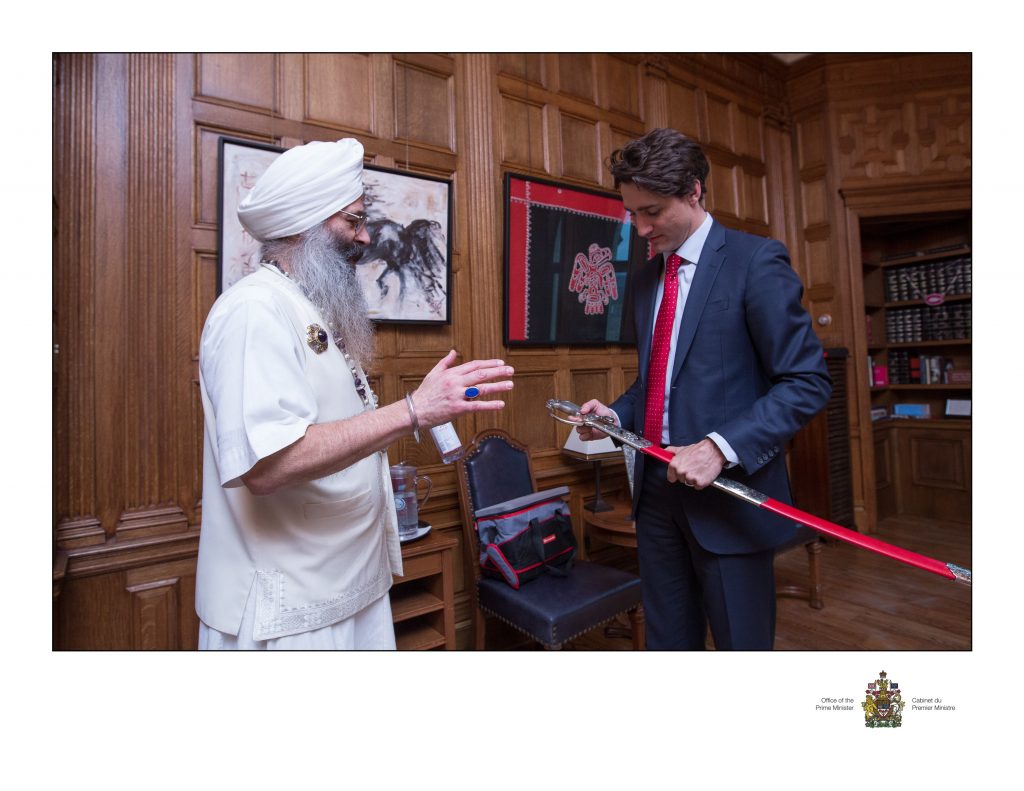 After the Gurdwara and presentation, Siri Bandhu Kaur, who was keeping me company, and I were allowed a private meeting with the Prime Minister, where I provided him with details about his sword and explained the significance of the sword for Sikhs and the Khalsa.  He requested to know what the etched words, ‘Deg Tegh Fateh’ meant, and was inspired enough by the spirit behind the meaning that he spontaneously reached out and hugged me.

It was a great privilege to be a part of this auspicious occasion for the Sikh Panth, Canadian Sikhs and Canadians generally, who brought honor to themselves, as well as to their Prime Minister, in this open demonstration of universal brotherhood and sisterhood and respect. 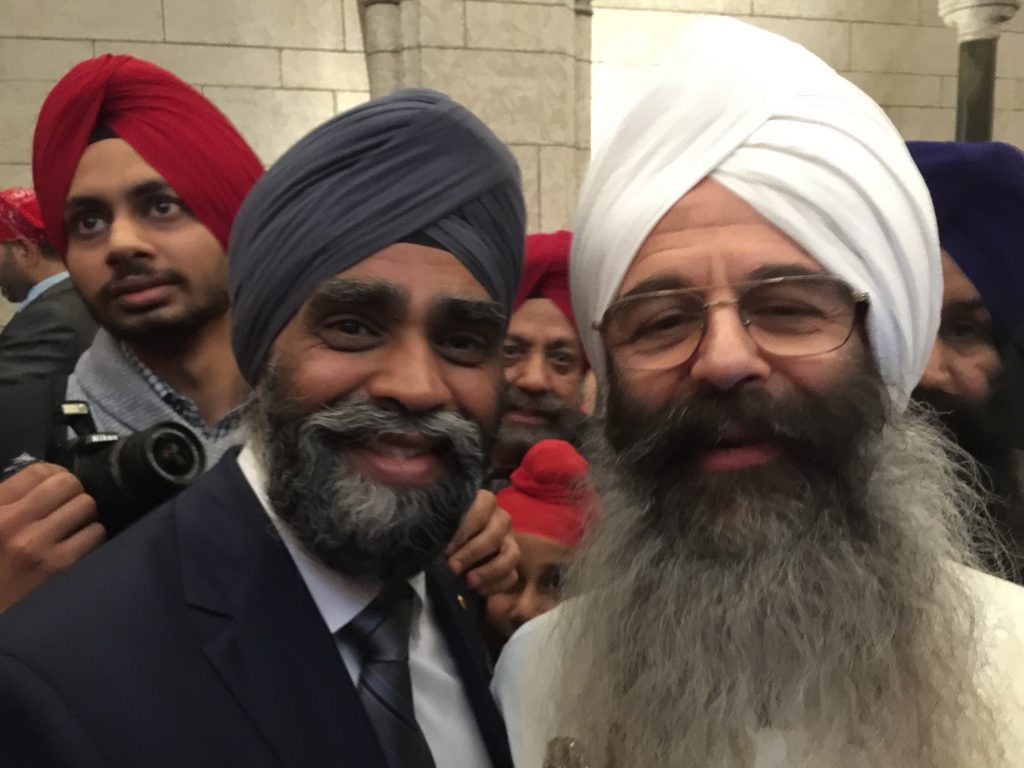 Jot Singh at the Canadian Parliament in Ottawa with Canadian Minister of Defense, Harjit Sajjan 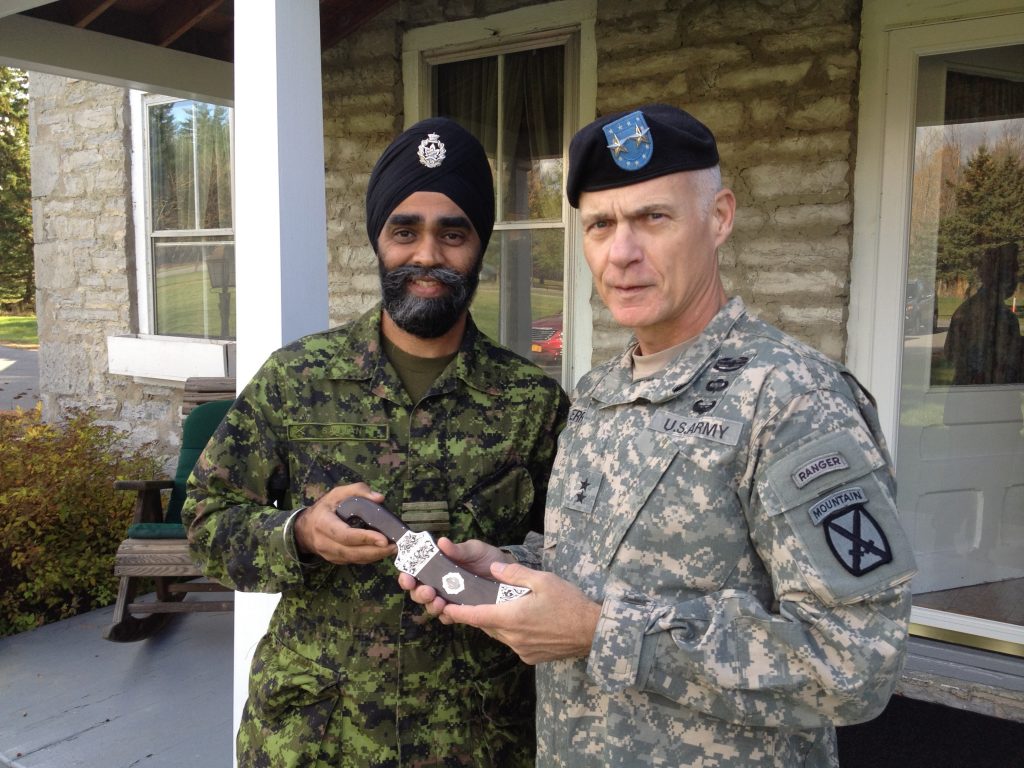