Part of me is optimistic about the state of the Golden Temple. Not to be overly revisionist or reductionist in my opinion on the place, I like to remind myself that politics, ideology, and the like have always been at work in the world of the Harimandir Sahib. Problems apparent now are probably just a trade-off for problems of the past. But there is one thing that I cannot shake: the brash lack of care for our material heritage as seen in the conservation or otherwise of the buildings and art in and around Darbar Sahib.

Living as I do within the holy city precincts the folks at Kashi House, who are behind the incredible book The Golden Temple of Amritsar: Reflections of the Past (1808-1959), asked me to assist in a ‘then & now’ project. I was to take a few photos from the same angle and framing as a handful of iconic pictures from the book that date between 1850 and 1900, the dawn of the photographic age. I was happy to oblige but little did I realize just how memorable and thought-provoking the experience would be.

My friend, Hari Mitar Singh, and I set out first to capture the towering structure of Baba Atal Rai from across the Kaulsar sarovar. A seven story octagonal structure topped with a minaret, the area around it is peaceful in comparison to the bustle around the shrine itself next door. Armed with the vintage image by way of comparison, the changes are fairly obvious: entire buildings are gone; new ones exist; different arrangements of trees. But the biggest changes can’t be seen from this angle; they lie on the inner and outer walls of the building. Centuries old fresco murals are in disrepair or have been entirely painted over. Then you have the gilded brass work that is finer than lace that is allowed to tarnish or has whitewash dripping over it. History is literally being whitewashed.I cannot claim to know the process for making these types of decisions but I have heard that some of the paintings, which depict Hindu deities, are being removed or allowed to deteriorate due to their “anti-gurmat” or “Brahmanistic” nature. I do not know if this rumor is true, but what I do know is that I feel pained when I see beautiful works of art discarded like trash. 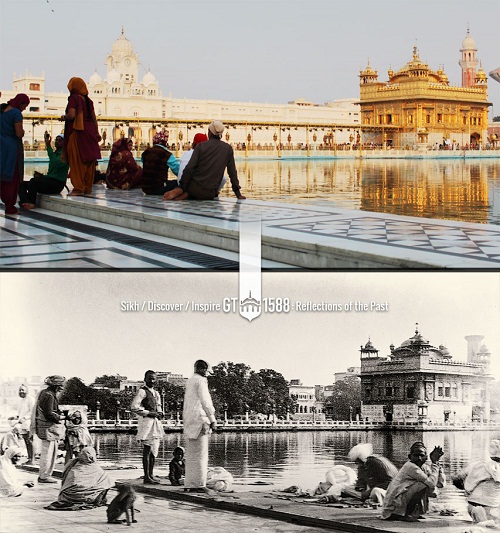 For our next comparison we took a series of photographs from across the sarovar looking at the temple itself. Several of them were obscured by modern structures. As pilgrims noticed what we were doing, a large group of people coalesced around us. Each onlooker offered tidbits of history or voiced appreciation at the old photographs. Two sevadars dressed in their orange cholas and tall yellow turbans approached us, spears in hand. Not sure as to their motive, I smiled and waited.

They glanced over our shoulders into our viewfinder and started enthusiastically telling us the precise location and angles from which each photo was taken. Both of them, I’m sure, had spent days in every conceivable spot around the parkarma. They quickly noticed, before we did, that the Dukh Banjan Beri was completely different from the way it once was. In fact, the temple is now obscured by a gurdwara built around the tree, which can still be seen growing through the roof. They pointed out that the tree we were photographing to the right of the gurdwara is far to the right of the original tree in the photo; the same tree now growing in the gurdwara.

We continued our journey around the parkarma snapping away. The face of each person who saw the old photographs would light up. There was a certain reverence in the eyes and tone upon seeing the black and white images.

Our next shot was facing the Darshan Deohri with the temple to our left. The original photo was a well-known one, depicting several boys with comically messy turbans sitting on the parkarma, their Punjabi teacher standing behind them. In our modern-day version, there just so happened to be a large group of Israeli tourists trekking around Asia in matching  t-shirts. We thought that their group would make a nice touch, showing the change of the Harimandir Sahib from an institution of learning and spirituality to, in many cases, a tourist attraction to the outside world.

My inner dialogue is conflicted. As a Sikh, I value the principles of a person over their religion, race, or creed. I try to live by principles over rules and value inner faith and goodness over outer physical identity. Why, then, should I be so concerned with the outer representation of the buildings that house the true object of desire to the Sikhs: the Guru? Shouldn’t I be unattached to such maya, such worldly, transient matters and be happy that I have a peaceful place to bow to the Guru and meditate? 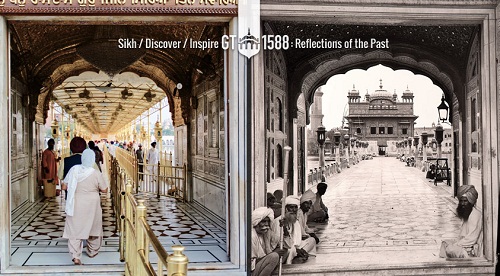 Of course I appreciate this place enormously. It is a sanctuary to millions including myself. But the destruction and streamlining of the buildings that surround the Guru, buildings that once served as schools or as rest houses represent much more. To me they represent the loss of the very essence of what the Guru represents: creativity, learning, light, universality, love, hospitality and service. That murals (such as in Baba Atal) are removed because they depict Hindu deities honoring Nanak at the Harimandir betrays an attitude of small mindedness and dogma. It speaks of orthodoxy and limited ideology – and a rewriting of our physical history – over simple faith, truthfulness, and inquisitiveness.

Capturing these images and juxtaposing them with the old was a fascinating project. I gleaned new insights into how the complex once looked and felt. The refashioning of those physical surrounds has as I’d previously acknowledged had a variety of impulses. However it is my hope that members of our community will step up and demand that this heritage be maintained not just for Sikhs, for by definition the Sikh is universal, but for all of humanity.

For a daily dose of Sikh heritage and history and to view the ‘Then & Now’ photo series go towww.facebook.com/gt1588 and for more on the Golden Temple book and historical articles see www.gt1588.com

For more details on purchasing the book:  The Golden Temple of Amritsar:  Reflections of the Past (1809-1959), published by Kashi House, see the info below and visit the Kashi House website

Have you ever wanted to:

USING THE DISCOUNT CODE:
To take advantage of this offer use the discount code 25B425 when placing your order onhttp://kashihouse.com

Here are the instructions on how to use it:http://kashihouse.com/pages/using-discount-codes