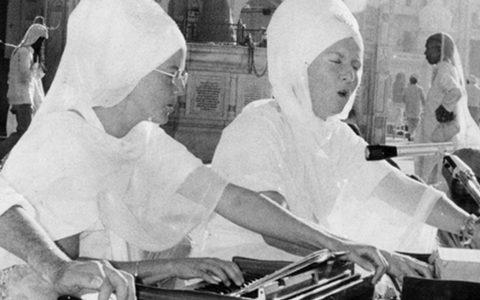 The Shabd Guru—I love this topic! It is so dear to my heart and so relevant in my personal and teaching life.

It’s amazing to reflect on Guru Nanak, who never actually had a human Guru. In his day, you had to have a human guide and teacher, but his guide came to him through the Jal Samadhi—his awakening in the river—when the Infinite came to him directly delivering the words of Japji Sahib.

The first non-human guide of the Shabd Guru came through this channel, and it continued through 10 human masters. The immense gift of Shabd Guru is that the state of ecstatic bliss that our Gurus experienced is transmitted directly to the reader, the listener, or the speaker of these sacred hymns.

The Words of the Saints

Guru Arjan Dev Ji did an incredible thing by collecting the words of many saints and sages and giving them the status of the Adi Granth. It was not the human being but the words that came through them that inspired and uplifted. Still, we know that people love the eloquence and guidance that comes through the human channel.

When Guru Arjan Dev Ji installed the Adi Granth inside the Golden Temple, he bowed to it as his Guru. I have not seen it written that people in those days went directly to the Shabd Guru, the sound current, for guidance. They went to Guru Arjan. 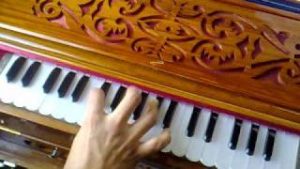 There are many avenues for gaining an understanding of life’s meaning—advice through the written word, guidance from a master, and inspiration through music. In 1973, Yogiji told me to travel to India. “You’re going to learn about Sikhi,” he said. This was a three-month excursion with Bibiji and family, Bahadur Singh, Dr. Sat Kirpal Kaur and others. He said we were going to do a 40-day seva at the Golden Temple. This was a deep longing of mine, after having seen a photo of the Golden Temple.

When we arrived the heat was unbearable—it was over 120 degrees. Imagine my naivety and my negativity! I was really looking forward to swimming in the nectar tank. There was not even any water! The nectar tank is drained every 50 years, and this was that time. We spent the day carrying mud from the bottom of the tank in pans on top of our heads. We were either soaked with perspiration or dirt.

That was my first challenge. The second: when I heard the kirtan at the Golden Temple, I couldn’t relate to it. The raag scales were very foreign to me. As a musician, I was out of my comfort zone.

The third challenge became a gift. While in India, I became intensely ill with dysentery and was sent to stay with Siri Singh Sahib Ji’s uncle, a medical doctor. During my stay, a neighbor loaned me The Sacred Writings of the Sikhs. The book contains poetic translations of Sukhmani Sahib, Japji Sahib, and portions of Asa Di Var. This was my first transformative experience of Gurbani through reading this book in English and feeling the impact of its words so deeply that I would read all through the night.

When I finished the book and was well enough to travel, I understood that I needed to return to the Golden Temple. This time I dipped in the nectar tank and had a profound experience of guidance for my life. And when I heard the kirtan the experience was so different from before. Listening to the wonderful, comforting, elevating Gurbani emanating from the blind ragi Bhai Gopal Singh, I felt I had come home.

The journey from total negativity to steady transformation to ever-deepening search for my life’s purpose continued. After taking Amrit at the Akal Takhat, I had a vision while standing on the Darshani De-ori, the area between the Golden Temple and the Akal Takhat. At that moment the answer to life’s big question came. My whole purpose was to be a woman of God; everything else was unimportant. The rest of my life was to be dedicated to live it, speak it, and teach it. 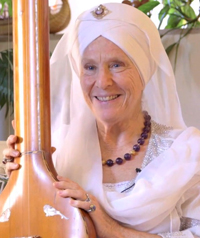 SS Satkirin Kaur Khalsa has been a devoted student and teacher of Sikh Dharma since the 1970s. She helped found the 3HO Kundalini Yoga Ashram in San Diego in 1971 and Guru Ram Das Ashram Gurdwara in Los Angeles in 1973. In 1974, the  Siri Singh Sahib Ji appointed her as Guru Granthi to the Los Angeles Gurdwara, where she served for 18 years, during which time she was appointed to serve the Office of the Bhai Sahiba. She subsequently served the Manhattan Gurdwara for 24 years. Satkirin Kaur is dedicated to sharing the infinite blessings of Shabd Guru through Naad Yoga, the yoga of sound, teaching workshops internationally and online and offering live kirtan performances. She has produced 18 celebrated kirtan albums.