This article is courtesy of Japjeet Kaur from Miri Piri Academy 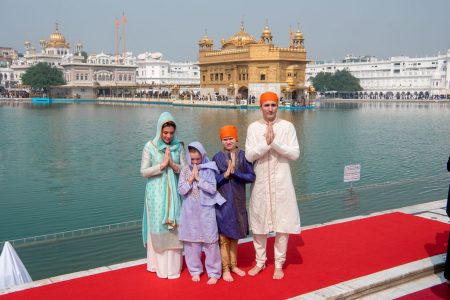 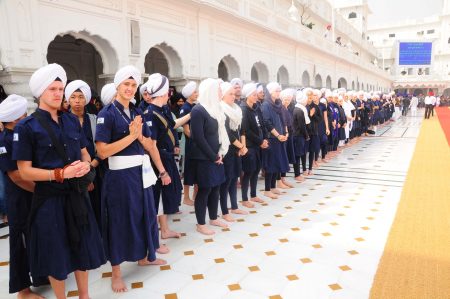 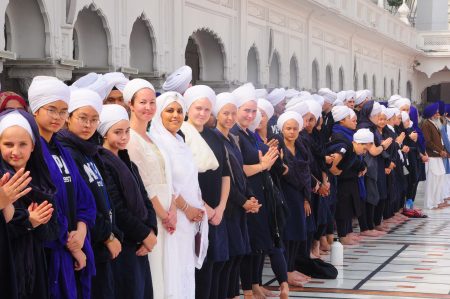 We stood in two long lines as we waited for the PM with the girls in the front and the boys in behind. When Mr. Trudeau first approached the students he stopped, looked down at the line of students and folded his hands in prayer, taking time to acknowledge the students. He then continued to walk along the parkarma acknowledging the students as he went. He stopped again half way through our cohort to greet Dr. Harjot Kaur who was with us. Dr. Harjot Kaur is a student of the Siri Singh Sahib’s and was one of his doctors. She lives in Calgary and serves as a member of the Siri Singh Sahib Corporation board. 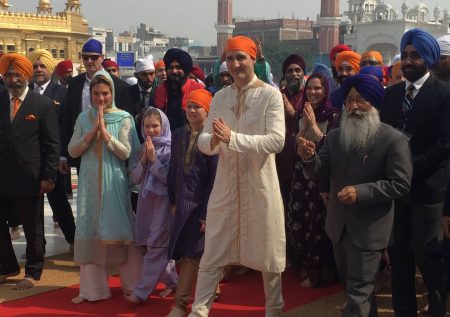 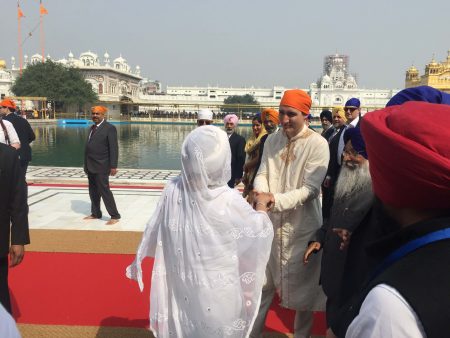 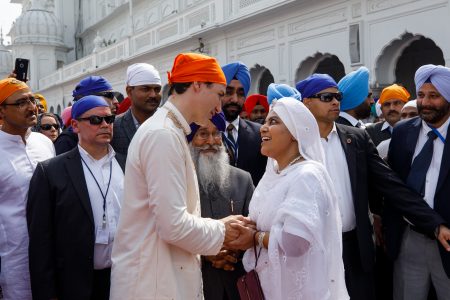 After the delegation passed, we exited the Golden Temple looking to make our way to Bharawan da Dhaba for some well deserved lunch. We had been instructed to be in our spot on the parkarma at 9am but arrived at 7:30am thinking that we would run into road blocks, traffic, a long walk and security. As it happens, we arrived in a record 22 minutes (maybe in reference to the Canadian TV show ‘This hour has 22 minutes’!) By the time the delegation passed by us on the parkarma, it was about 12:45pm. The students did exceptionally well being patient with the process. Many brought Nitnems and read their banis, practiced a quiet meditation or successfully slept sitting up. MJ Gurprakash Singh said he loved it and read ‘all the banis’ while waiting. ‘Not just the five main ones!’ 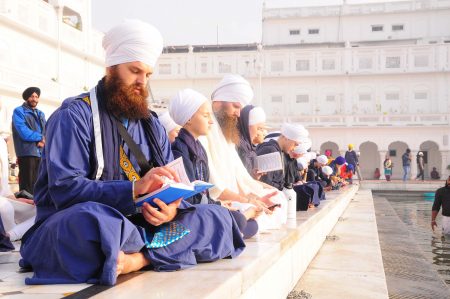 On our way to Bharawan we were stopped by Canadian reporters. Since I am Canadian, they interviewed me about the significance of the PM’s visit for Sikhs back home. All of our Canadian students stood beside and behind me for that interview, looking very calm and distinguished.

At Bharawan we ate some delicious food. Daal, paneer, chana, yogurt, roti and kir. It definitely hit the spot. Unfortunately our grade 11 students, who are experimenting with yogic diets this week, were challenged at this juncture to resist this delicious food and op instead for a salad or juice, depending on their particular diet. After arriving back at the school, the students had about an hour rest before continuing with their afternoon and evening activities.

This was a great experience for the students and the school. As Amrit Singh and Gurprakash Singh explained to the students, this is exactly the kind of thing that the Siri Singh Sahib valued. It was a long day; a test of endurance and they came through.

Our thanks to Dr. Harjot Kaur for securing our spot on the parkarma. We were fortunate in that the organizers didn’t put any security in front of us, allowing us to serve as security for our section and have an unimpeded view of the Prime Minister. Our regular presence at the Golden Temple and our reputation certainly helped in this regard. 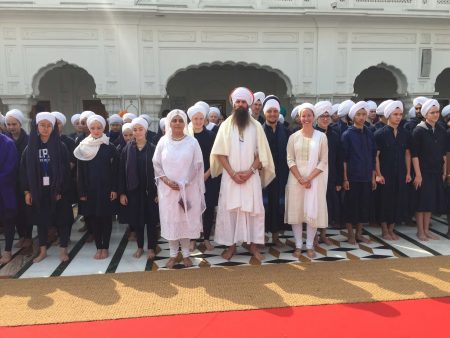 After greeting the Prime Minister at the Harimandir Sahib, we returned back to campus where Canadian Member of Parliament, Randeep Singh Sarai, visited us with his entourage. 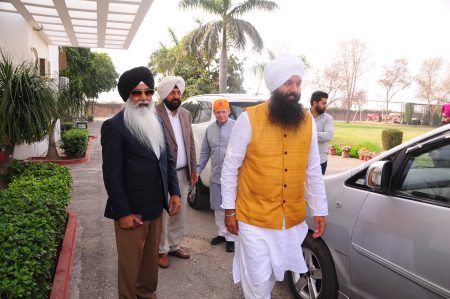 Randeep’s visit to MPA was a positive one. The school has evolved a lot in the past twenty years. We greeted Randeep and his guests at the gate and took them on a tour of the school. 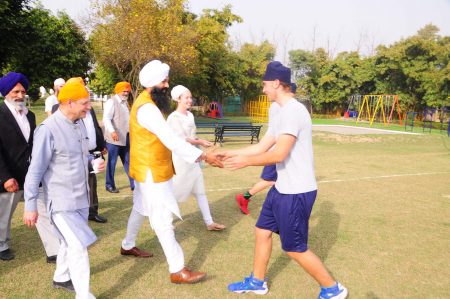 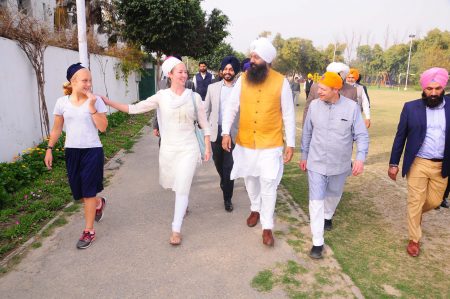 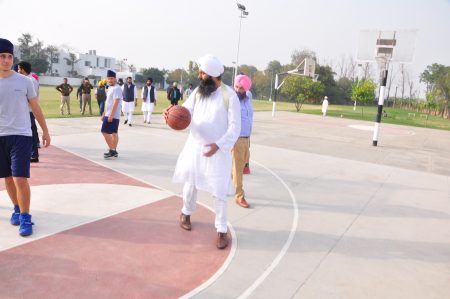 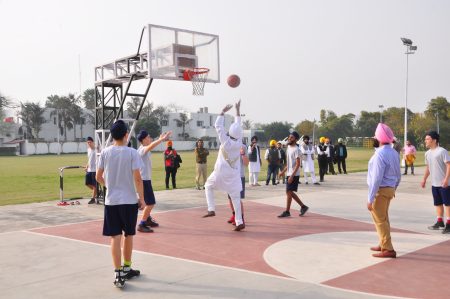 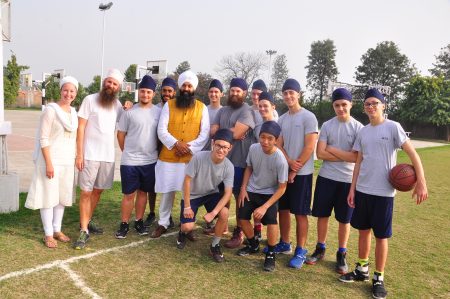 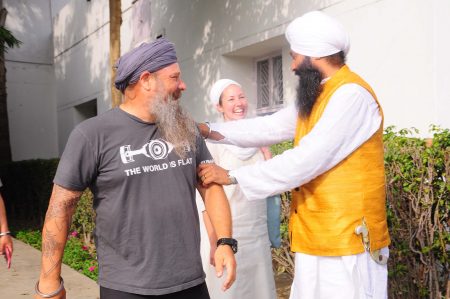 Along the way, he met the boys basketball team, he addressed the intermediate students, had some chai and snacks, then shot a couple of hoops with the boys basketball team. Coincidentally, his old friend, Siri Narongkar Singh (the father of Siri Atma Kaur and Sarib Jot Kaur) was on campus at this time and they enjoyed seeing each other.