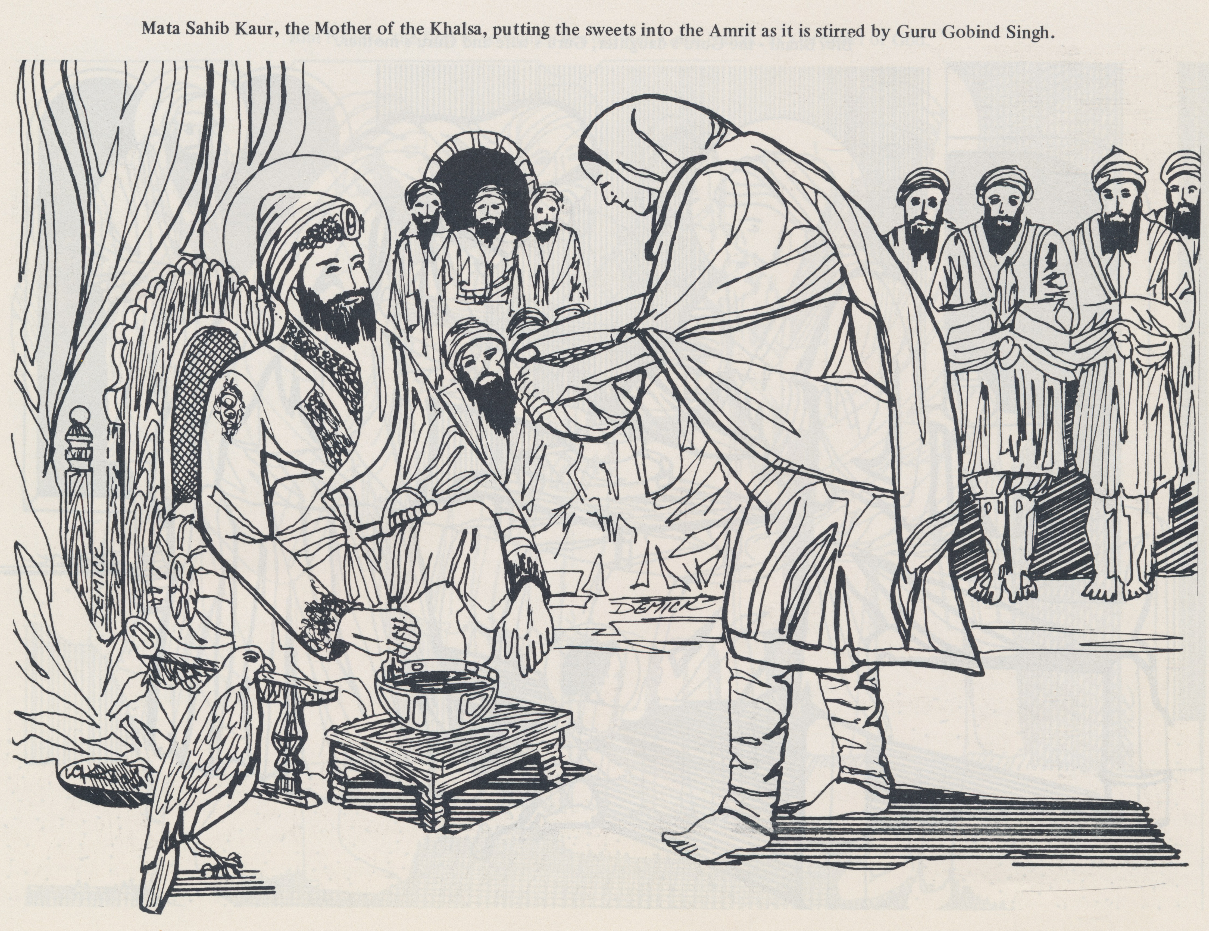 This article, written by Sat Kirn Kaur, first appeared in the 1975 Summer Issue of Beads of Truth Magazine

The woman that all Khalsa Sikhs alike refer to as their mother is Mata Sahib Kaur. This graceful and humble woman was the wife of Guru Gobind Singh.

She lived at a time when India was plagued by foreign invaders, attempting to conquer her territories and force their faith on the Indian people.

Mata Sahib Kaur’s husband, Guru Gobind Singh, had taken up the sword against the invaders and was determined to protect the religious freedom and sovereignty of His countrymen.

On March 30, 1699, Guru Gobind Rai called a gathering of His followers in Anandpur Sahib to establish the Sikh way of life as we understand and follow it today.

He prepared to initiate the five beloved ones into the body of the Khalsa, the congregation of the pure ones. He recited from the words of the previous Gurus as He stirred from a steel vessel filled with water which was to be the baptismal nectar or Amrit.

Guru Gobind Singh then spoke to the multitudinous gathering:

“All that drink from this water shall become brave and powerful. But before we proceed, let me show you what wonderful power this Amrit possesses.”

All watched as two of the Guru’s sparrows filled their beaks with some Amrit that was placed in their drinking bowl. These two little benign creatures were transformed into two bold hawks, and spreading their wings with fearless dignity, they flew above the crowd.

“Just as these two little sparrows were transformed, so shall those who partake of this Amrit become fearless, powerful and brave.”

Mata Sahib Kaur had witnessed this demonstration. In her radiance and piety she thought of the words of Guru Nanak:

“Sweetness and humility are the essence of all good qualities.”

With this inspiration flowing through her, she took some Indian sweets and brought them before the Guru.

As she stood before Him He recognized the power of her womanly grace and sweetness radiating with a great brilliance. This sweetness filled Guru Gobind Singh and He requested that Mata Sahib Kaur pour the sweets into the Amrit.

The sweets dissolved into the water as the Guru stirred them with the double-edged sword.

The Amrit became as sweet as ambrosial water.

“Just as we need the qualities of fearless courage and strength to carry us through these times and the hard times to come, so do we need to temper it with justice, compassion, sweetness of mind and a peace-loving nature so we may some day live in peace.

Just as all life comes through the sacrifice of the woman, so shall all those that drink of this Amrit possess the grace of her compassion and sacrifice, as well as the strength of a lion.”

She continued to guide the Guru’s affairs after He passed away on October 7, 1708, and shone as an example to all people of the grace and nobility of woman.

Read the original article from the Summer 1975 Beads of Truth.