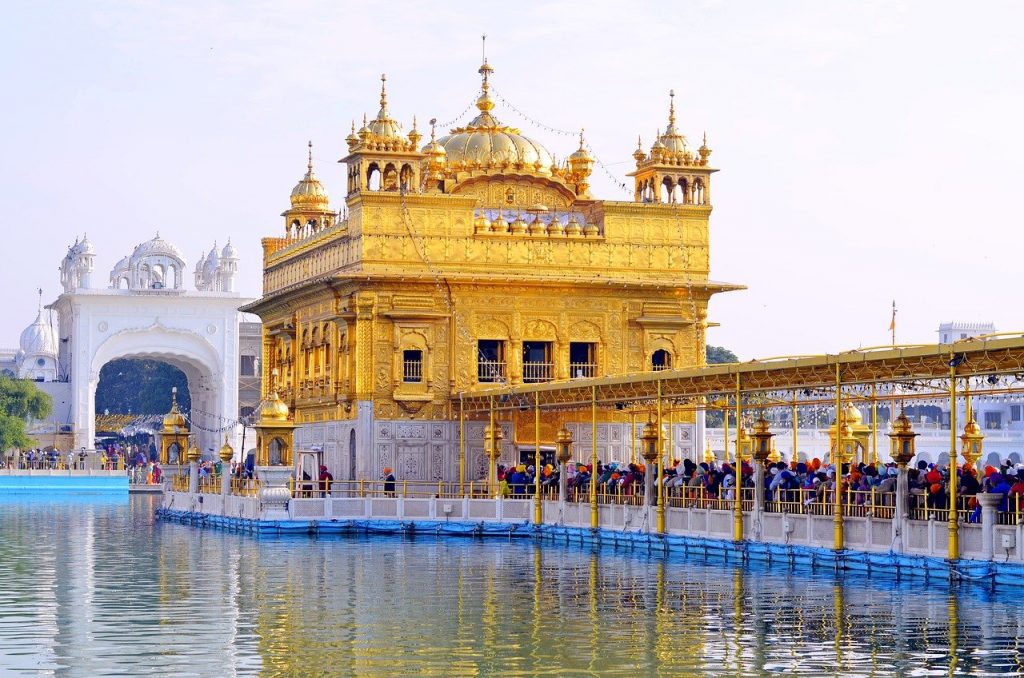 There is only one breath; all are made of the same clay; the light within all is the same.

The One Light pervades all the many and various beings. This Light intermingles with them, but it is not diluted or obscured.

I will never forget the first time I heard Eboo Patel, a “rock star” in the interfaith world, speak. I was in college in Ohio, and even though I was watching a video on the computer and was not seeing him live, the effect was no less exhilarating. I was electrified by his words, his ideas, his presence. That was the day that I became a passionate interfaith organizer, and I haven’t looked back.

“Bridges don’t fall from the sky,” he said. “They don’t rise from the ground. People build them.” “We have to build bridges that are stronger than the bombs that other people might throw.”

I don’t believe that Eboo is being metaphorical here – I think he is saying that we literally must harness the strength of our love to forge relationships with communities that are different from our own, bonds that are strong enough to withstand the temptation to sink into hate, the temptation to despair, that witnessing religious violence in the world, can cause even the most optimistic among us. In the world we live in, I believe the path of hatred is easy, and the path of love is hard.

I draw my inspiration to do interfaith work from a rich Sikh history, and many Sikh interfaith heroes. Guru Nanak, the first Guru and founder of the Sikh faith, is famous for saying “There is no Hindu and no Musalman” – his first words upon reappearing after his enlightenment. Guru Nanak taught that the only divisions among humanity are imagined constructs of the ego, and that we all come from one Creator.

Guru Arjan, the fifth Sikh Guru, built the Golden Temple in Amritsar, India, the most sacred site of Sikhism, with four doors, one on each side, to signify that people from all faiths and walks of life are welcome.

Guru Arjan also wrote one of my favorite shabads: 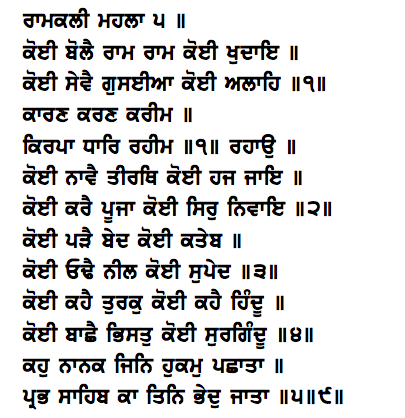 He is the Cause of causes, the Generous Lord.

Some bathe at sacred shrines of pilgrimage, and some make the pilgrimage to Mecca.

Some perform devotional worship services, and some bow their heads in prayer. ||2||

Some read the Vedas, and some the Koran.

Some yearn for paradise, and others long for heaven. ||4||

Says Nanak, one who realizes the Hukam of God’s Will, Knows the secrets of his Lord and Master. ||5||9||

The Siri Guru Granth Sahib, the final sovereign and eternal living Guru, contains writings from the Sikh Gurus and saints, and also from Hindu and Muslim mystics.

Perhaps the most dramatic example of interfaith activism among Sikhs lies with the legacy of Guru Teg Bahadur Ji, the ninth Sikh Guru. Guru Teg Bahadur made the ultimate sacrifice and gave his life so that another faith community, the Hindu pandits of Kashmir, could practice their faith, thereby preserving freedom of religion in 17th Century India.

“The Guru, by this act, set a yardstick by which the Sikh must gauge their devotion to their religion. It is now not acceptable to say that ‘I believe in the right of others to practice their faith peacefully’ – this does not even get near the level of awareness required for the followers of Sikhism . . . It is not even acceptable to say: ‘I, as a Sikh respect and honor other religions’ – even this does not get the Sikh to the required threshold of “wakefulness” (Surat). The Sikh mind-set has to get to a position of consciousness where he or she will be able to say, ‘I, as a Sikh, am ready to die to protect the right of the people of all faiths.’”

Siri Singh Sahib, Yogi Bhajan is another one of my interfaith heroes. He was a strong supporter of interfaith cooperation and an advocate of world peace. During his lifetime, Yogi Bhajan met with world leaders representing many major faith traditions to engage in dialogue, including Pope Paul VI, Pope John Paul II, the Dalai Lama and two Archbishops of Canterbury. He also participated in a number of interfaith events and conferences, including the Parliament of the World’s Religions. He became Co-President of the World Fellowship of Religions in 1974, and served on the Board of Directors of the American Council of Executives in Religion. He was also a member of the inter-religious Council of Southern California.

In my life as an interfaith activist, I continually draw on these Sikh shabads, stories, and larger than life figures for inspiration.

I am a second-generation American Sikh, born to two parents who were originally Jewish and converted to Sikhism after falling in love with the teachings of the Siri Singh Sahib, Yogi Bhajan and joining 3H0 communities on the East Coast. My father became a Sikh when he was 19 years old. My mother was 30. I grew up in a home full of love and devotion for the Guru.

I also grew up with Jewish grandparents, aunts, uncles and cousins. We would celebrate Jewish holidays together. I will always treasure my memories of Passover Seders around my grandmother’s table, of eating potato latkes, lighting the menorah and playing dreidel with my cousins during Hanukkah. I attended Miri Piri Academy in Amritsar, India where I was steeped in Sikh practices and traditions, and then I finished high school at a Catholic school in Fairfax, Virginia.

I gained love and knowledge of Jewish scripture, holidays and traditions from my extended family, and a deep appreciation of Catholic beliefs and practices during my days in Catholic high school. I believe that these experiences paved the way for my interfaith activism and appreciation of other faiths.

During college, my interest in fostering interfaith understanding and collaboration caused me to begin working with United Campus Ministry: Center for Spiritual Growth and Social Justice, a nonprofit grounded in Unitarian Universalist values dedicated to the promotion of interfaith community in Athens, Ohio. During my junior year at Ohio University, I coordinated weekly Interfaith Impact meetings at UCM, designed to facilitate understanding among students of diverse faith and philosophical traditions through conversation and dialogue.

During my senior year of college, I served as a Fellow with Interfaith Youth Core, a nonprofit based in Chicago founded by Eboo Patel. IFYC is dedicated to making interfaith cooperation a social norm by supporting interfaith leadership and service projects on college campuses across the U.S.

What if people from diverse faith and philosophical traditions came together to make the world a better place? Making this type of interfaith action the “new normal” is the mission of Interfaith Youth Core.

In the words of founder Eboo Patel:

During my Interfaith Youth Core Fellowship, I created a steering committee with representatives from major faith and philosophical communities on Ohio University’s campus to execute IFYC’s signature ‘Better Together’ campaign. We drew on our common values to combat water pollution locally through large-scale interfaith stream cleanups and internationally through clean water fundraising efforts. Over the course of the year, we removed thousands of pounds of trash from a stream in Southeast Ohio and raised enough money to provide over 100 Haitian citizens with clean water for one year in the aftermath of the earthquake in 2010.

We worked together to promote interfaith cooperation on our campus, and built a coalition that included Ohio University administrators, faculty, students, local nonprofits and religious leaders to make interfaith cooperation on projects for the common good the new norm at Ohio University. At the end of the year, we were mentioned on a White House blog as the type of interfaith project President Obama wished to replicate at college campuses across the country in 2012.

This past year I have had the blessing to serve as a Public Affairs Coordinator with Sikh Dharma of Virginia, a position which requires a great deal of interfaith outreach. I have greatly enjoyed deepening my interfaith relationships in the D.C. area by attending a variety of interfaith events and conferences. I also served as an organizer of the Reimagining Interfaith Conference in Washington D.C. in 2018. This past year, I have also participated in interfaith coalitions advocating for action on climate change and affordable housing in the D.C. area.

Here are some of the things that I have come to believe during the course of my interfaith activities over the years:

My interfaith adventure is ongoing, and I do not doubt that my views will continue to evolve in the coming years.

I strongly believe that interfaith cooperation is the way of the future, and that it will be a hallmark of the Aquarian Age. I have a dream that we will see a great deal of interfaith action on a global scale for the betterment of our earth and humankind in the years to come,  in areas including feeding the hungry, cleaning up our environment, waging peace and many more.

I believe that Sikhs are uniquely positioned to play a role in interfaith efforts, because of our rich interfaith history, our strong interfaith ethic, our love of seva and our commitment to manifesting the common good through the concept of Sarbat da Bhala – blessings and prosperity for all.