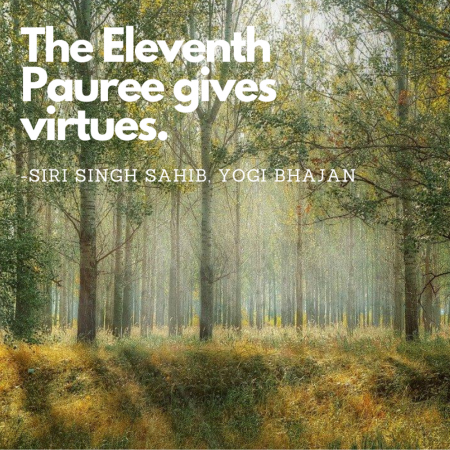 “The Eleventh Paurī gives virtuousness.” – from the Teachings of the Siri Singh Sahib Yogi Bhajan (1)

This Paurī is the 4th of the 4 Suṉi-ai Paurīs. Suṉi-ai means through listening. Deep listening that involves not only hearing with your ears, but hearing with all the senses, every cell of you vibrating in awareness, consciousness, and inner knowing. All the 4 Suṉi-ai Paurīs broaden your base of information, teaching you to expand your awareness. No judgement, no belief, no conclusion is required just yet. Simply listen.

The words used by Gurū Nānak in this pauri include references to Muslim law and Muslim spiritual and temporal leaders. As he was with everyone he met, Gurū Nānak encouraged the experience of spirit, which is One throughout all religions. Coming out of deep meditation, Gurū Nānak once proclaimed,  “There is no Hindu, there is no Musalman.” (2) He explained that the only Reality is Spirit, which has been clothed in many costumes and speaks many languages. Gurū Nānak travelled far and wide, and spoke to the people in the way they could understand according to their traditions, culture, and personal experience. His mission was always to deepen the experience of Spirit for all who came to be in his presence.

Listen into the depths of the ocean of virtue as held in the saraa.

Listen to experience the consciousness, the knowledge, and caliber of a Sheikh (Muslim religious leader),  Pir (Muslim saint),   Patishah (emperor).

In this way of listening, the blind one finds the way.

Listen past the perceived depths of the infinitely deep ocean of consciousness.

Oh Nānak, the devotee is ever in bliss.

In this way of listening, trouble and sin are dissolved.*

Gurū Nānak’s words served to revive the spirit where it had become obscured for many people of many faiths and traditions. Those words, themselves, are compositions of incomparable beauty, which have left in their wake the multitudes of Sikhs who have lived and died by them. Yet there ever remains an openness in the Sikh way of life to acknowledge Truth where it exists in all the Paths. It is important in these times that people of faith remember the One light we all share.  Sat Nām.

(2) Macauliffe, The Sikh Religion, Its Gurus, Sacred Writings and Authors Vol 1 and 2, 37. 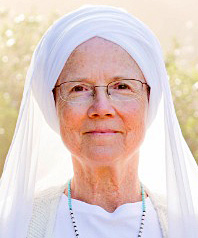 Prabhu Nam Kaur has been singing sacred mantra and shabad from the Kundalini Yoga and Sikh traditions for more than 40 years. She aspires to sing these songs of God with devotion, so that their wisdom and beauty can shine forth, and so that listeners can find their own ability to sing and experience them as well. Her most recent CD  titled Ardaswas released in 2014.  She has also recorded Sopurkh,  Seasons of the Soul, and with her daughter Snatam Kaur, Divine Birth and Mother’s Blessing.